We had two almost contradictory objectives today. One was to make some headway towards Italy (mine) and the other was to find a decent sized Lidl, Leclerc or Carrefour and stock up on Cremont Limoux (Vanya’s). In the end we managed neither. Had we travelled the southern route past St Tropez, Cannes, Nice and the like we could perhaps have achieved both objectives but that is such a tedious route.

Instead we googled Lidl to find a decent sized store and then, armed with the necessary information, made our way north through the Alpes Haute de Provence to the small town of Digne-les-Baines. A little further research and we may have discovered that Lidl had only 4 bottles of Crement left. No matter, Vanya bought them all and then we set off to a campsite she liked the sound of at a place called Baratier.

Baratier is just 40 miles from the Italian border with Italy so while neither of us had fulfilled our respective objectives we both made progress. Best of all we were each blown away by the scenery on the way across to Baratier. We took the route through Le Vernet, Seyne, Saint Vincent les Fortes and Savines le Lac (which I believe the Tour de France follows). The road winds through and over some quite spectacular mountain scenery and for a while it follows the beautiful La Durance River and along the south bank of it’s reservoir, Lake Serre-Poncon.

One remarkable site we stumbled upon en route to Baratier (on the D954 in the Durance Valley near La Sauze du Lac) is a series of natural columns of earth and stone known as Des Demoiselles Coiffees; meaning, Young Ladies with Fancy Hair or a Nice Hat. Not hard to see why they were so named as each column is topped with a large rock.

The campsite? At first glance, it was very quiet and had everything we needed but it really is in the middle of nowhere and that evening we walked miles in the dark looking for a restaurant that would tolerate dogs. The only open restaurant we could find was a hotel restaurant and they wouldn’t admit dogs. It was back to the Van for cheese & biscuits because we hadn’t defrosted anything in the freezer.

Talk about being blessed. If La Vogue was an amazing experience, the next stop at Moustiers Sainte Marie was out of this world.

We took our time over the 85 mile journey, avoiding all toll roads and driving across the Valensole Plateau. For miles in every direction there was little else but large fields of Lavender interspersed with the occasional olive orchard. Unfortunately the Lavender was not in bloom (we’d missed it by a month) but it wasn’t difficult to imagine how magnificent these fields would have looked just a few weeks ago. Beautiful.

Moustiers Ste Marie is a small village of some 700 people in the Natural Parc Regional du Verdon. Dating back to the 5th century it is perched in a semi circle of rocky cliff at the entrance to the Gorges du Verdon (the largest canyon in Europe) and it’s setting is as attractive as the place itself with spectacular views as much from the foot of the village looking up as from it’s heights looking down over the rooftops and across the Maire Valley.

It is another plus beau village du France (that’s two in one day); full of charm, narrow streets, little squares, faience workshops, cafes and restaurants; all dominated by the 12th century four storey bell tower of the Notre Dame de l’Assumption Church (which sits in a pretty square in the centre of the village with an unmissable fountain). It’s very much a tourist town now and busy.

The whole town looks a bit like a nativity scene with a 1.25 metre gilded gold star suspended by a chain high in the sky above another religious monument sitting in the cliffs at the back of the village. This is the Chapel of Notre Dame du Beauvoir. There is a legend concerning the star which was related by the poet Mistral. He tells of a knight of Blacas who after being captured by the Saracens in a 12th century crusade swore that if ever he managed to return home he would hang a star up over the chapel in honour of Saint Mary. So it came about.

The high spot of the village for me (and please forgive the pun) is this small chapel. It’s a beautiful little chapel in its own right but the views over the Maire Valley and down on to the village are equally special. It takes only 15 minutes or so to reach the chapel from the village below and it is well worth the effort. I took the left hand path up, passing the Grotte Saint Madeleine on the way and came down by the right hand path. If you’re nervous about heights you will probably prefer to use the right hand path for the ascent and descent but there is no real exposure on either route.

It was first built in the 9th century but the oldest part remaining today is the nave which was built in the 13th century. It was a popular pilgrimage centre in the Middle Ages and in the 17th century was known as a chapel where still born children would return to life for the time it took for them to be baptised and their souls could go to heaven.

Before tourism, Moustiers was largely about pottery. It is famous for it’s Faience Earthenware. There’s an earthenware museum in the village holding a collection of this fine glazed earthenware some of which dates back to the 17th century. Faience Pottery is made to this day with the village operating 14 workshops and 22 sales outlets. Vanya gave the museum a miss, preferring to visit a workshop and buy some new Faience Pottery rather than just look at the old stuff. And what did she buy? A glazed wine cooler. What else?

We returned to the village early that evening so as to be certain to get a table in a restaurant (like I said, the place is busy) and thereafter enjoyed a lovely meal on a packed restaurant terrace – the wine was cheap and the food was good; mine was a Wild Boar Stew cooked in Lavender Honey. We were pretty much the last people to leave. Nothing wrong with that.

The journey from Taradeau was fine (mostly motorway) until I reached the walled city of Avignon itself. The campsite I was heading for is just outside the walled city on the Ile de Barthelesse and my (not so) trusty sat-nav insisted on taking me through the walled city with all it’s narrow lanes. It wouldn’t have been so bad and I could perhaps have made it except that it was Wednesday and much of the city is closed to vehicles on a Wednesday (or at least on this particular Wednesday): 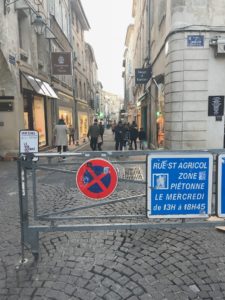 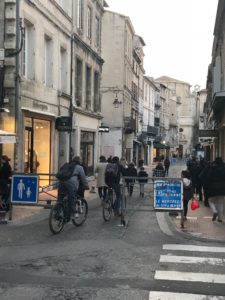 After driving around the narrow lanes for a while (using bus lanes when I ran out of road) I gave up on the sat-nav and followed my instinct (and a road sign) to the Ile de Barthelesse. For all it’s smug superiority and foreign languages, the sat-nav cannot recognise the days of the week. Hah! One up to me. 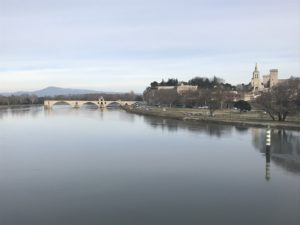 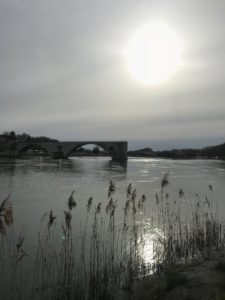 Avignon on the Rhone. Both photos taken from the Ile de Barthelesse. The (part) bridge is the 12th Century Pont St Benezet (sometimes known as the Bridge of Abignon). 18 of it’s 22 spans were washed away in the 17th Century and it has been left that way

Crossing over from the Ile de Barthelesse (using a more complete bridge), the most prominent of all the buildings in the old town are the two standing alongside each other on the Place du Palais; the Cathedral Notre Dame des Doms with it’s guilded Virgin Mary  and the 14th Century Palais des Papes (another Unesco World Heritage Site) built to accommodate  the pope and his entourage after the newly elected pope Clement V chose to stay in his home country rather than move to the (then) wholly corrupt city of Rome: 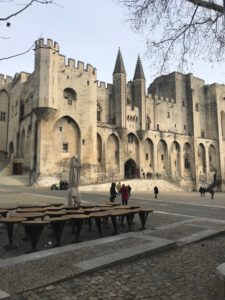 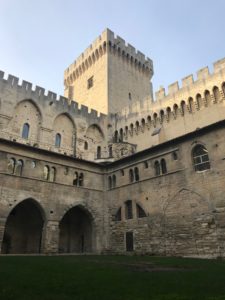 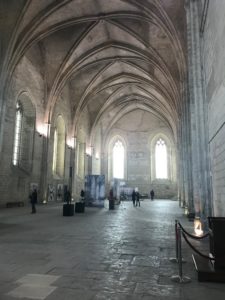 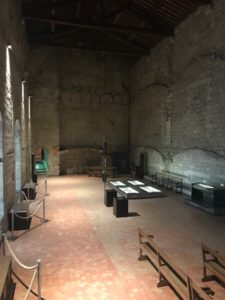 … above, the Palais des Papes (plural because a number of subsequent popes, another 6 I think, preferred Avignon to Rome) and, below, it’s immediate neighbour the Cathedral of Notre Dame des Doms with the guilded Virgin Mary watching over Avignon… 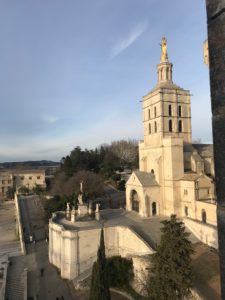 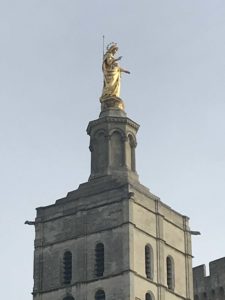 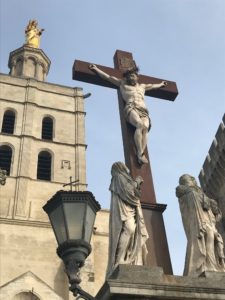 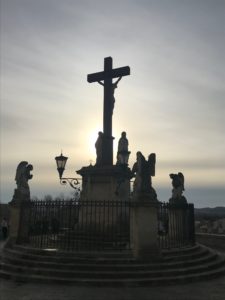 Views across the city from the Palais… 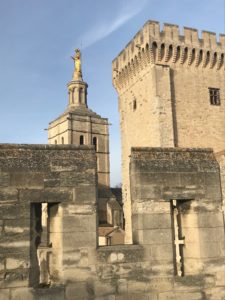 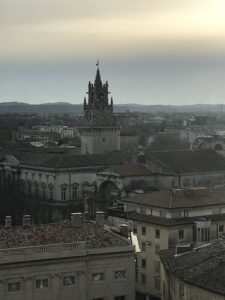 …and from the gardens behind the Cathedral… 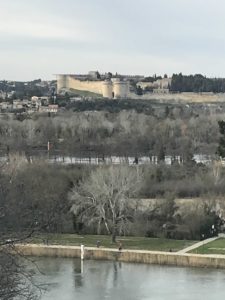 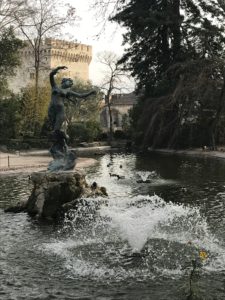 There are other impressive churches to see in Avignon; principal among them being the Basilique Saint Pierre d’Avignon, the Eglise St Didier and the Protestant St Martial Temple but I had seen enough churches in Italy to last a lifetime and the rest of my day in Avignon was spent perusing Les Halles (a large covered market with just about every food you could imagine – local chefs attend the market every Saturday morning and give free cookery lessons) and sitting outside a cafe doing what should be done when the sun is shining namely, drinking coffee and watching people go about their daily life. You can’t beat it.

Having said that, I’m going to make an observation (in the form of a question). Has anyone ever had a decent cup of coffee in France?

I left Sestri Levante intending to make one further halt in Italy, 120 miles away in San Remo, either for a late lunch or even to overnight depending on what San Remo has to offer. After a straight forward journey in wonderful sunshine I arrived in San Remo as a thunderstorm started. When moments later it started to hail, I set off towards my fall back destination, Monaco. It was snowing as I drove through Monaco and I didn’t even pause for a coffee – do you blame me?

Into France, past Nice and Cannes where there was heavy rain, westward towards the blue sky. I even passed Antibes without stopping and that place was one to visit for the Absinthe alone. To get to my age and never have tasted Absinthe is not right. 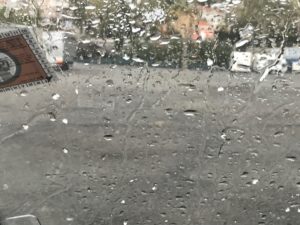 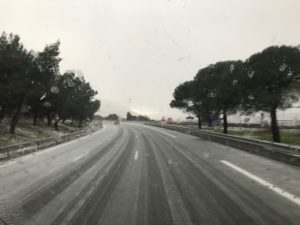 … San Remo and Monaco – I’ll let you know. I remember the days in the Balkans and in Greece when I would simply move the Van to where the sun was expected to be

Anyway, I stopped at Taradeau in Provence, a town of less than 2,000 people, and there’s nothing there to talk about (although the Provence countryside is beautiful and the people very friendly) except; the sun shone and I chilled for the best part of 2 days. I tell a lie – there was a Hyper U Supermarket and lots of other shops; probably the best range of foodstuffs I have seen in months. I grabbed a supermarket trolley and I was like a kid at Christmas.

The food that first night was tremendous. Lots of little hors d’oeuvres, a full plate of fresh prawns the size of small lobsters and then, best of all: 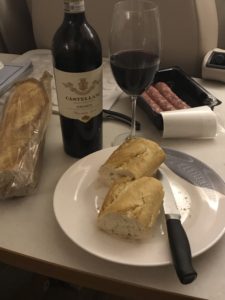 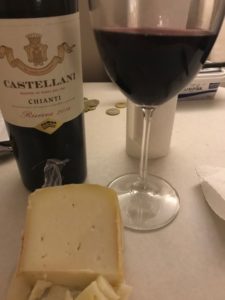 Nothing else to report because I have done nothing but sit outside in the sun. I head off to Avignon tomorrow.