We arrived late at our campsite on the edge of Colmar by the River L’Ill but the receptionist, bless her, had stayed late to check us in. I stopped there two years ago for a few nights and knew it would be open this time of the year but, because of the National Covid Lockdown starting the next day, I wasn’t sure if we would be allowed to stay the two nights we needed (we had to get the dogs seen by a local vet for tapeworm tablets before they would be allowed back into the UK) but, I needn’t have worried. The receptionist told us that whatever happened we could stay the extra night. Again, bless her.

We were happy staying over, it gave us a chance to wander around Colmar, a small town in the Alsace Region of France not far from the German border. Vanya had never seen the place. I walked the largely pedestrian old town on my own that first morning and I had never seen it so quiet. It was the first day of the Lockdown in France and the place was virtually deserted. It was much the same in the afternoon when I showed Vanya around the town.

The old part of Colmar is a labyrinth of cobbled streets and timber framed chalk box coloured houses with steep pitched rooves and wooden shutters and it is truly beautiful. When I last stayed there, in 2017, it was packed (not least because it was the day of the town’s annual 10 km run) and I arrived as the runners were finishing. Not so this time.

What is particularly sad is that prior to our arriving the local authority had been putting up the town’s Christmas decorations. Ordinarily, Colmar has 5 weeks of Christmas Markets which are supposedly amongst the best in France – I suspect that will not happen this year.

I probably mentioned this in my earlier blog on the town in 2017 but, amongst other things, Colmar was the birthplace of Frederic-Auguste Bartholdi who created the Statue of Liberty. The house he lived in is now a museum dedicated to his work and there’s a statue of Bartholdi in the Parc du Chateau d’Eau with him holding a small replica of the statue of “Liberty Enlightening The World”.

Oh, and we made it to the vet. Would you believe it, he charged a staggering 91 Euros for administering two tapeworm tablets?!? Robbery!

So I did it. I cycled from Colmar to Eguisheim.

More about Eguisheim in a moment (and the town is well worth a visit) but first some advice on getting there. Don’t cycle it or, if you must cycle it, do not rely on the sat-nav in your vehicle for directions. Before setting off I committed the route on my “top of the range Pioneer system” in the Van to memory and left feeling quite confident that I knew where I was heading.  All went well to start with (the cycle paths in this part of France track most major roads and are fantastic) but then, after a really nice fast bit coasting downhill round a bend and bombing along a wholly empty right hand lane I realised I was travelling along the hard shoulder of the motorway to Strasbourg. It was a very sheepish me that dismounted and walked back along the motorway to find an alternative route. I’ll probably figure prominently in the French equivalent of one of those “Cops” TV programmes where they show video from motorway camera. Oh well…

Eguisheim is a lovely place, renowned (at least locally) for it’s fine wines and flowers. Flowers were not much in evidence (it is winter) but I tried a couple of “verre(s) vin blanc de la maison” and they were most enjoyable. It’s not a big town but it is crammed with character as I think the photos will show:- 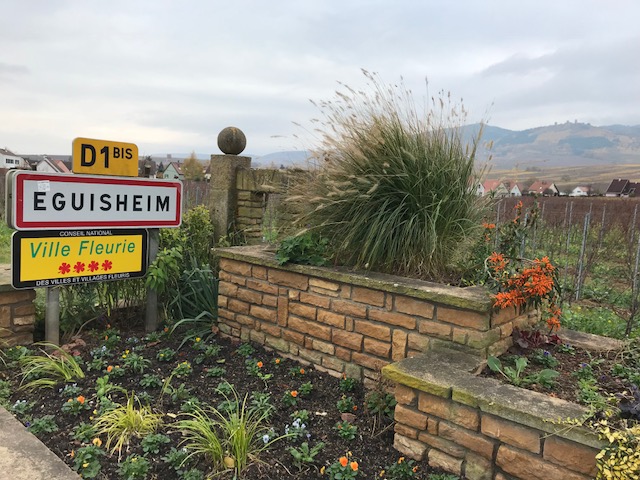 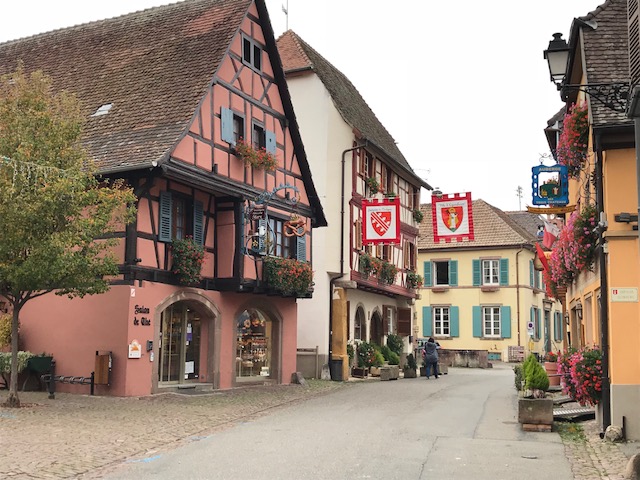 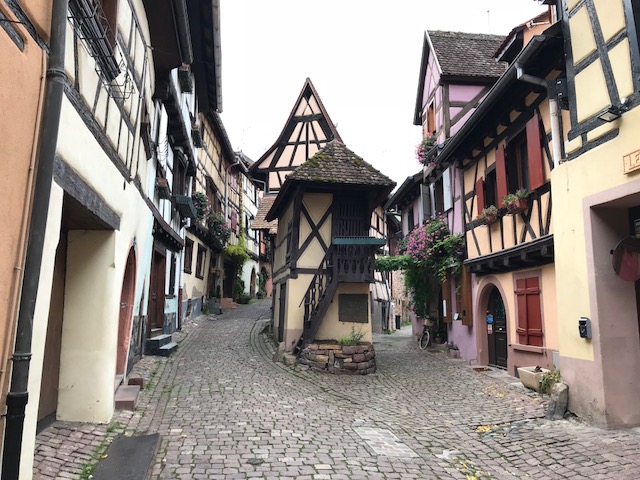 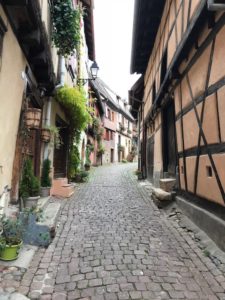 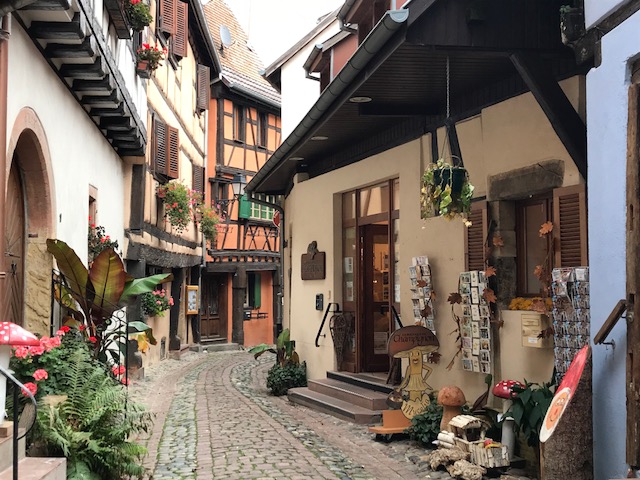 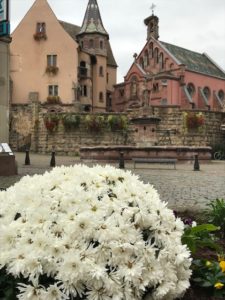 So there were a few flowers out 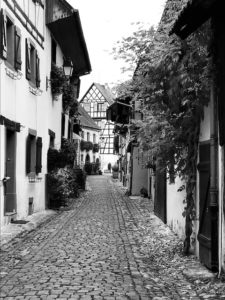 I took many black & white photos – it seems to work here 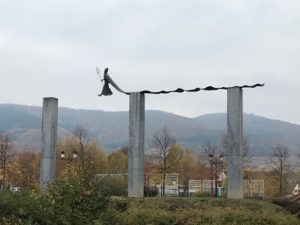 Needless to say, it is pretty much all pedestrianised.

I won’t talk about the cycle journey back. There was a railway line and lots of ploughed fields and, honestly, it’s just a bad memory  but, it doesn’t detract from the fact that the town of Eguisheim is magical (and it is so close to Colmar).

Staying in Colmar for a couple more days. I need some decent winter tyres for the Van and they cannot be delivered until Wednesday morning. There are worse places to be while waiting for winter tyres but I should have had this done while back in the UK waiting for the house to be sold. My schoolboy French really doesn’t lend itself to a protracted conversation as to the merits of different winter tyres. At least the people at Best Drive Tyres didn’t laugh but I’ll not rest easy until I have seen exactly what it is I have ordered.

Tomorrow I am thinking of cycling (yes, cycling – they say you never forget how) to a place called Eguisheim, a few clicks from here. Eguisheim was recommended to me by a local guy I met today in the Irish Pub (of course there’s an Irish pub here!) as being every bit as nice a place to visit as Colmar. Well, I think that is what he said – He couldn’t speak English (and he was French, not Irish. Lol). Time will tell. I have to get to Eguisheim first without my sat-nav. 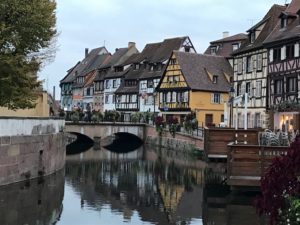 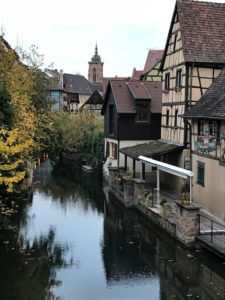 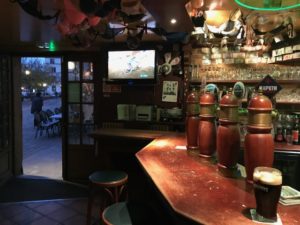 Inside the Irish Pub – that’s my Murphy’s on the bar. 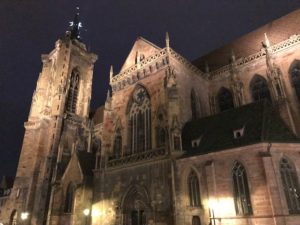 It was dark when I left the pub

Rain woke me at 05.00 and prompted an early departure to Colmar (rain sounds much louder in the Van and will take getting used to). It ceased raining as I arrived at my planned stop for the next couple of nights (Camping de L’Ill, N48 4’51”  E7 23’12”, about a mile from the centre of Colmar).

Camping de L’Ill has all mod cons (although the swimming pool has been emptied for winter); is situated in very pleasant surroundings (close to a bar/restaurant) and; best of all, at least for the moment, I have it pretty much to myself. 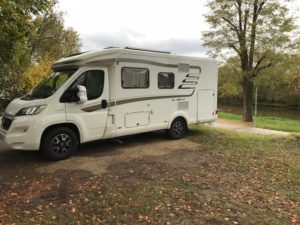 Parked up at Colmar 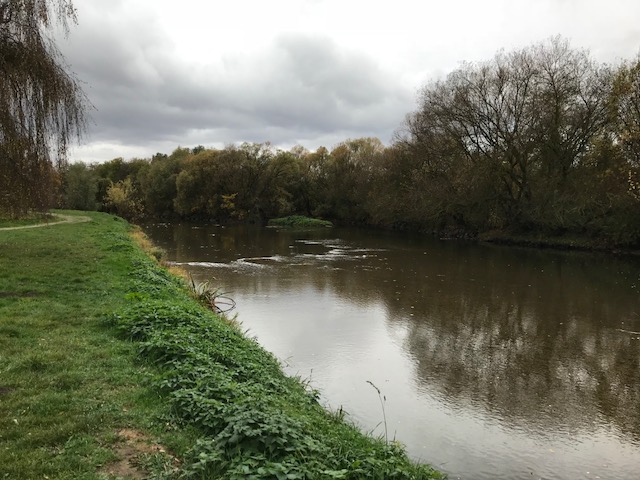 The view of the River L’Ill from my back door 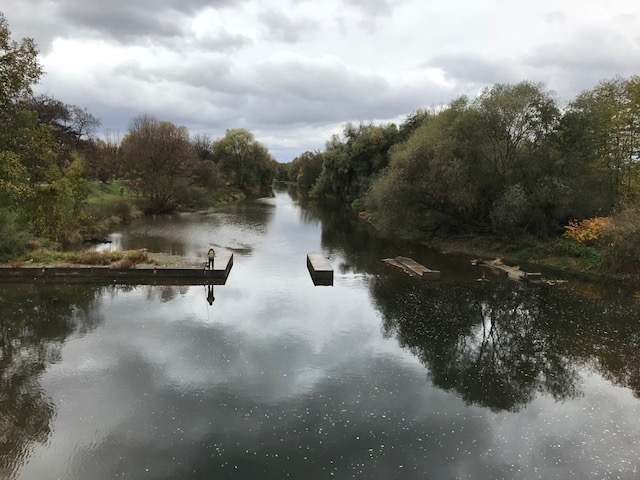 A local, fly-fishing on the L’Ill

From what I could research and have been told about Colmar I expected something special and I wasn’t disappointed. I’m just back from a 6 hour walk around the town (except for a couple of hours in a very good bar/restaurant that will receive a mention in my trip advisor review when or if Will tells me how trip advisor works) and it is perhaps the most charming town I have ever visited.

The town was surprisingly quiet even though there was a 10 km fun run taking place which finished in the town centre. This is the advantage of arriving out of season.

No more words; just a handful of the 50 or 60 photos I took although they don’t do the place justice… 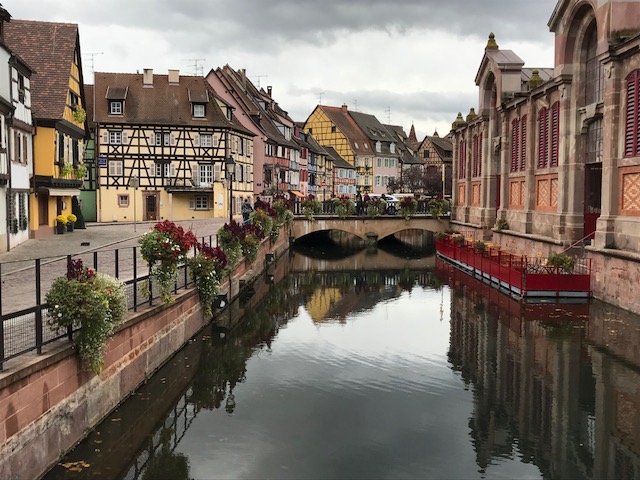 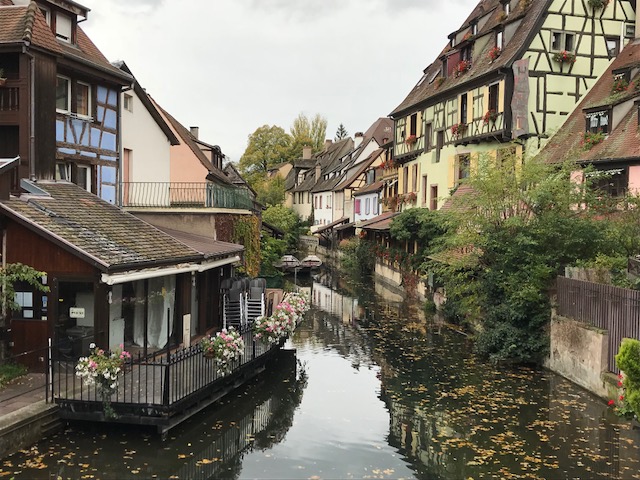 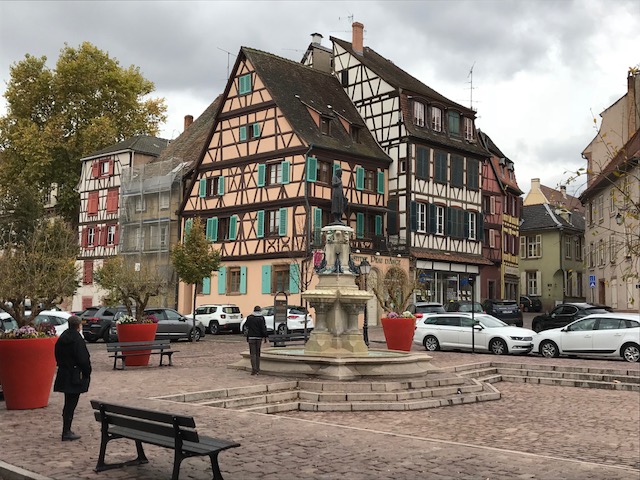 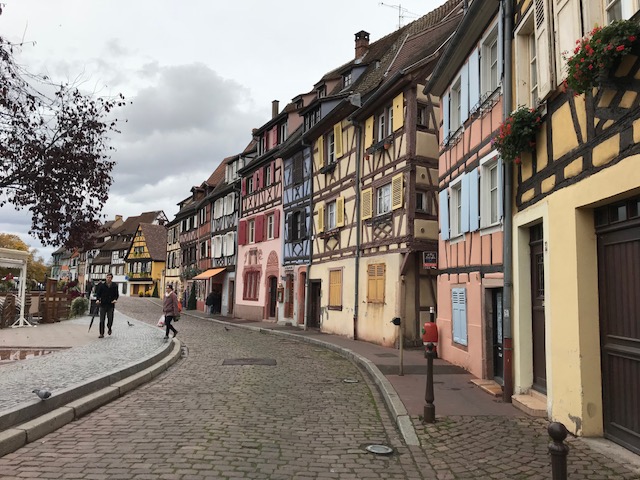 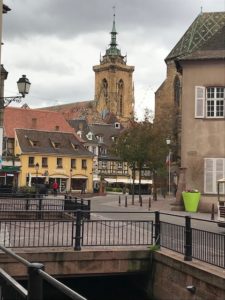 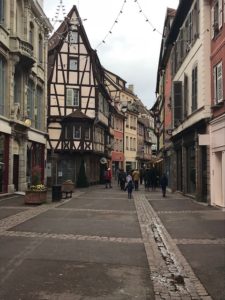 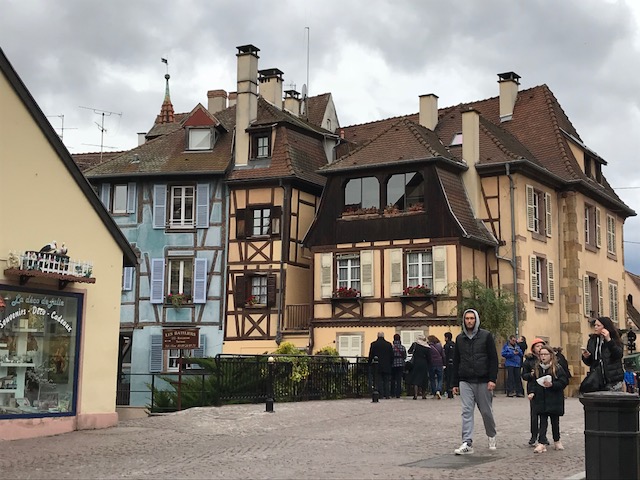 Needed to cover some ground today and made seriously good time down the motorway from Lille to the little village of Dieue-sur-Meuse, stopping at Epernay on the way for a glass of Champagne. I was in Epernay just last year and it is well worth repeat visits especially when the weather is as nice as today – warm and sunny.

The French motorways are impressive and well worth the toll price.

The stop in Dieue-sur-Meuse was what might be termed a wild camp inasmuch as the village didn’t have a pub. Well, it did but it never opened. Went for a short evening stroll and had a quiet night in with a bottle of the local wine – a Pinot Noir that set me back 3 Euros (I went for the mid price range). 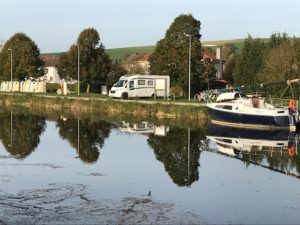 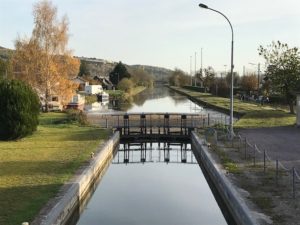 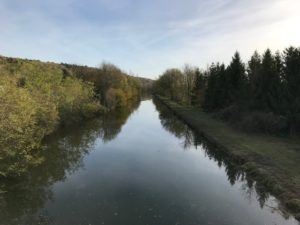 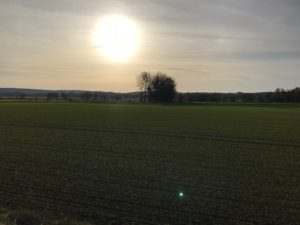 … and, yes, it was a gorgeous evening.