Our last visit to Enzesfeld, just a week ago, saw us catch up with our good friends, the Dedics, and take in trips to Eisenstadt, Rust and Baden bei Wien. This next visit was no less interesting with the added attraction that our daughter had arrived from the UK for the weekend.

A number of wine heuriges were now open and we took full advantage of that during this second 3 day visit. We also visited Hinterbruhl and the pretty little town of Gumpoldskirchen and the small village of Holles (all conveniently located in Lower Austria).

Starting with Enzesfeld itself; while Vanya disappeared into Vienna to meet up with Rohan, the rest of us (Clare, Alex and Niki – Gerhard was still in Abu Dhabi on business) took the dogs for a walk and then, joy of joys, we stumbled on a pick-nick (that’s German for a picnic, as if you couldn’t work that out) but this was subtly different. The Weingut Mayer in Enzesfeld had opened for business in their vineyards (as opposed to back in the town heurige) with a wine tasting picnic.

Hinterbruhl is a small village 12 miles south west of Vienna. Now, it is almost a part of Vienna. It is said that Franz Schubert wrote Lindenbaum in Hinterbruhl but there is no documentary evidence of that. More certain is that it is home to Europe’s largest known underground lake, the Seegrotte. The lake was formed in 1912 when a huge explosion rocked numerous caves which had been dug under the village in the mining of gypsum. The explosion released millions of gallons of water which flooded the lower caves and formed the lake.

Mining was immediately discontinued following the explosion but some of the upper tunnels and caves were reopened during WWII as a satellite camp for Mauthausen Concentration Camp. Engine parts were produced here for the fledgling lightweight (almost disposable) jet fighter know as the Spatz or, in English, the Sparrow (the Heinkel 162). There’s a memorial above ground for the concentration camp inmates here who were all murdered.

We took an informative guided tour through the cave system during our visit; walking the upper levels and being ferried around on a boat in the lower levels. At 15 euro per person it was quite pricy but I’m pleased we did it. Effective lighting throughout the lower levels of the caves made for some very pretty photos.

From Hinterbruhl we made the short journey to the delightful village of Gumpoldskirchen. This is for me the prettiest of the villages in the area surrounding Enzesfeld. Of course this view may have been influenced by the excellent wines we enjoyed in a local heurige during our visit but, even so, Gumpoldskirchen is very pretty.

The last place we visited during this stop in Enzesfeld was Holles. Holles was about the pleasant walk to and from the village from Enzesfeld and our stop in yet another heurige where we sampled Gruner Veltliner, Rivaner (a speciality of this particular heurige) and a Gelber Muskateller and; not forgetting the food, various local cheeses, smoked ham and Salzstangels (salted bread sticks).

And then it was back to Enzesfeld. Thanks so much, Clare; both for introducing us to these wonderful places and for being… Clare. See you soon, we hope!

So we made it to Enzefeld. Gerhard was away on business but Clare, Alex and Niki made us most welcome (as usual) and our two day stopover became 3 days. Their neighbours were not as pleased that we stayed on because on our last night we were up singing German Kindergarden songs until four in the morning. I think Vanya and Clare stayed up another hour or so.

We made a couple of trips out in the Van from Enzesfeld; Clare showing us the way to Eisenstadt and Rust in the Austrian region of Burgenland on our first day out and then; me taking Vanya to Baden bei Wien.

A little bit about each of them… Eisenstadt first. Eisenstadt is the provincial capital of Burgenland and the smallest of the Bundeslander or state capitals. From what we saw it must also rank amongst the prettiest and has a surprising number of interesting places to visit. Principal amongst them is the beautiful baroque palace known as the Schloss Esterhazy. The Schloss has been home to Esterhazy Princes since 1649 although there was a castle on this site as long ago as the 13th century. Other interesting aspects of the town are the Palace Park (with it’s four ponds, the Leopoldine Temple and a large Orangerie), the Marien Temple (now known as The Gloriette), the Joseph Haydn Museum (the prolific composer worked for the Esterhazy’s for 40 years and lived in this building for 12 of them) and, my favourite, the Bergkirche (Haydn’s Church, which is now home to the Haydn Mausoleum).

A couple of interesting facts about Haydn. First, he is credited with composing 104 symphonies and 50 concertos. Prolific or what! Second, in 1790 Haydn moved to London for a while and at least one of his biographies claims that his days in England were the happiest of his life. I wonder how many people can say that but, of course, at that time the rest of Europe was in some considerable turmoil.

After wandering the town and parks for a while (and enjoying one of the best ice creams ever) it was time to leave Eisenstadt and make our way to the smaller but equally pretty town of Rust am Neusiedlersee. The Neusiedlersee is a large shallow lake (average depth 1.5 metres) which forms part of the border between Austria and Hungary and it is arguably the star attraction in the area. That is not to say that the small town of Rust itself is not also worth a day of anyone’s time. It is situated in one of Austria’s most famous wine producing regions, right on the banks of the lake, and has regularly won Burgerland’s ‘Most Beautiful Town’ award. One feature of the place which visitors will not fail to notice are the many storks nesting on the house chimneys. It reminded Vanya and I of our drive up through Portugal last year.

Other features worth visiting in Rusk are the local heuriges (you simply have to taste the wines here, white and red); the Catholic Church of the Holy Trinity (get your timings right and you will be able to climb the church tower for reasonable views over the Neusiedlersee) and; the Fischekirche (a delightful little church by any standards).

The Fischerkirche (the fishermen’s church) deserves a special mention. It is a former fortified church which was dedicated to the Saints Pancras and Giles. It owes it’s name to a legend where Queen Mary of Hungary, while fleeing from Mongol invaders, was rescued from the lake by local fishermen. To give thanks, she founded the chapel, the inside of which is very quaint.

Finally, we come to Baden bei Wien. Vanya had never been to Baden. That had to be put right. Also, it provided me with the opportunity to revisit the town and to walk up to the Konigshohle and then on to Castle Rauhenstein. Despite visiting Baden a number of times (and I have previously written a blog about Baden), I had never visited either the Konigshole or Castle Rauhenstein.

Famous for it’s sulphur springs and Roman baths, Baden bei Wien was another summer residence of Austrian and German rulers and in 2021 was recognised by UNESCO as one of the great spa towns.

Baden is a pretty enough town but it doesn’t have that many ‘must see’ places and it therefore doesn’t figure amongst my favourite towns to visit. It is more a place to go and do something particular whether it be to soak up the spas or gamble in the casino, enjoy fine wines in the local heuriges or wander the many short hiking routes in the area.

This time my reason for visiting Baden (other than to show Vanya the place) was to walk up to the Konigshohle and then on to Castle Rauhenstein. These are two very short easy walks that took absolutely no time. I combined them with a walk to Burgruine Rauheneck.

Arriving at  Enzesfeld about mid afternoon I received a great welcome from Clare and Gerhard and their son Nikki (and later their daughter Alex and her partner Manuel) and then, over the ensuing ten hours, I must have put on about 3 kilos in weight through eating Clare’s seriously excellent pork dinner (see photo below – the picture doesn’t do the dish justice) and drinking an extensive range of beers, wines, schnapps and whisky with Gerhard and Nikki.  About the only drink we didn’t sample was Port. 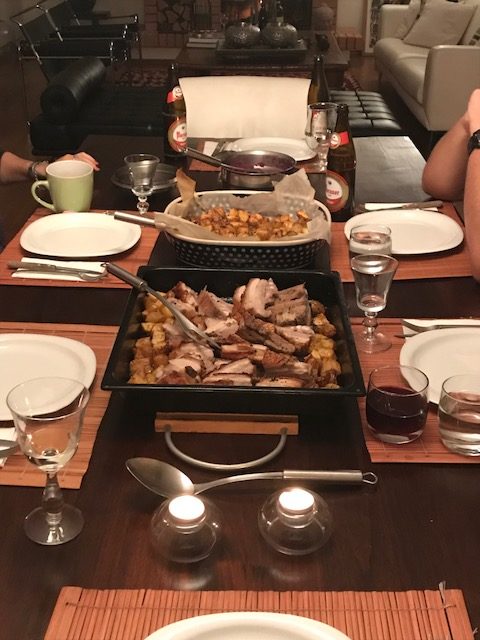 Crack(l)ing pork dish served up by Clare that could compete with anything I’ve eaten so far on this trip. 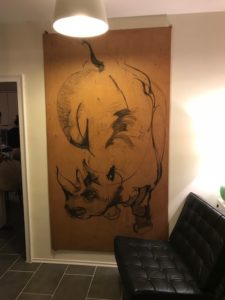 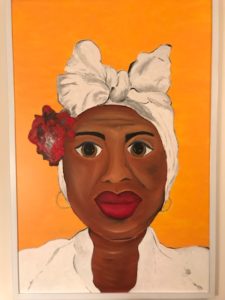 …and then there’s Clare’s artwork. These are two of my favourites. We won’t talk about Schubert’s Unfinished…

The next day was mostly about a walk through part of the Wienerwald Forest which surrounds Vienna. There are countless routes through the forest (including a pilgrim trail that starts from Cracow in Poland and finishes in Rome – there’s devout!) but I favoured the route we took because every other kilometre or so we came across a Gasthof that served food and schnapps. 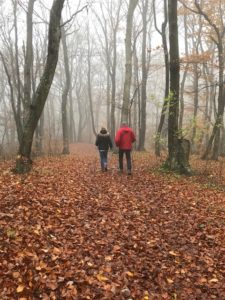 The paths were easier to follow than the picture suggests. 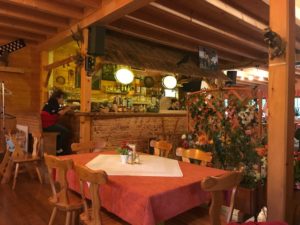 Left photo shows the inside of one of the woodland Gasthof’s (very welcoming); the other shows a  couple of large Schnapps made with pine needles (very warming).

It was almost dark by the time we got back to the car but a short drive took us to the village of Sooss  and the Heurige “Weingut Steiner 67” for slices of thick bread smothered in pork lard (Smalzbrot and Grammelsmatzbrot, the latter has added pork crackling) followed by Wienerschnitzel (with something resembling cranberry sauce) and all accompanied by some seriously fine local wines, not the least of which was a nice Gruner Veltliner. What a place the Heurige is! It is primarily about producing and selling wine but this particular restaurant can be measured among the best encountered on the tour so far. Another one for trip advisor. 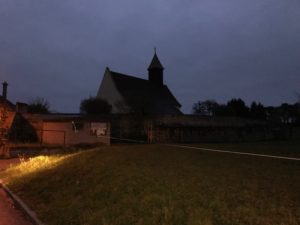 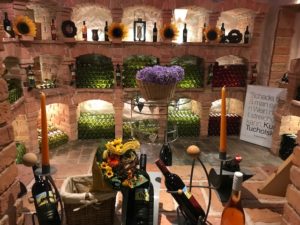 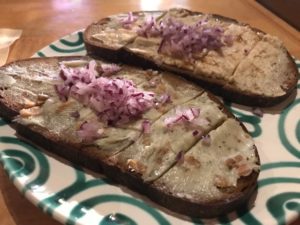 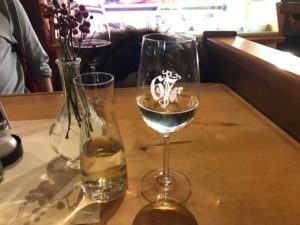