Today started somewhat inauspiciously but turned out well. I was to get a train from Sestri Levante to Camogli (at the northern end of the Portofino Peninsula) and then hike some 3+ hours across the peninsula to the San Fruttuoso Abbey (the Abbey can only be reached by foot or by sea) before getting a ferry back to Camogli and then the train to Sestri Levante.

I had bought the train tickets and was en route to Camogli when a local, bless him, explained that the ferries don’t operate in the winter and that my only alternative would be to charter a boat (very expensive). Immediate change of plan. I thanked the man, got off the train at Rapallo (which is located at the southern end of the Portofino Peninsula) and elected instead to check out Rapallo and then the two other small towns on the southern end of the Peninsula, Portofino and Santa Margherita Ligure, before taking the train back to Sestri Levante.  Camogli and the Abbey will have wait. Shame, Camogli sounds special and there’s an interesting dive off San Fruttuoso: 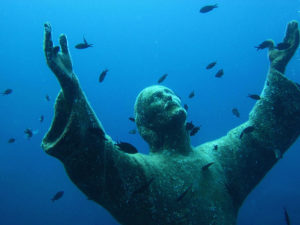 … the above photo (not mine) is of Christ of the Abyss, made in bronze and submerged off San Fruttuoso near where Dario Gonzatti drowned (the first Italian to use SCUBA). Could be a good dive.  A second statue, cast from the same mold, is off St George’s, Grenada (a gift of the Italian Navy for help in rescuing the crew of a stricken vessel) and a third bought by the US in 1965 was placed off Key Largo, Florida 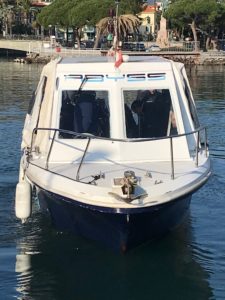 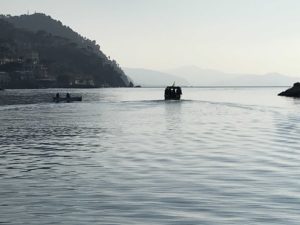 … Sod’s Law. To date, everywhere I have been, the dive schools have been closed. Today I learn about Christ of the Abyss and I come across two schools operating out of Rapallo, one leaving to dive the Abyss as I arrive and the other preparing for a wreck dive

Rapallo seems a lively place and would probably have made a better base to explore the area from than Sestri Levante.  There was far more activity on the seafront than you would normally expect of a Sunday morning and the place seemed to be gearing up for a carnival of sorts (large families and every woman and her dog was out – it seems to be the women who walk the dogs here) but I didn’t have time to wait. I estimated it would take up to 3 hours to walk to Portofino and back and if I allowed myself half an hour in Santa Margherita Ligure and another 2 hours (including lunch) in Portofino, I would be back in Rapallo by mid afternoon to catch whatever has been planned and, in any event, have a proper look around. 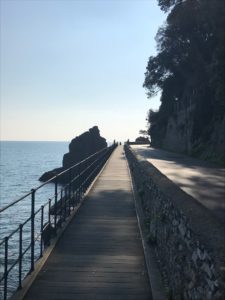 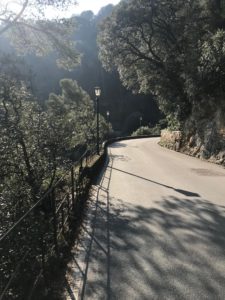 … most of the way, first to Santa Margherita Ligure and then Portofino, there’s an easy footpath that hugs the coast. Even where there is no path, the road (especially the part after Santa Margherita) is virtually deserted because only local traffic may park in Portofino

I reached Santa Margherita within 25 minutes of leaving Rapallo: 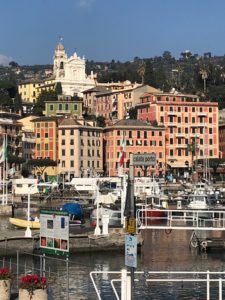 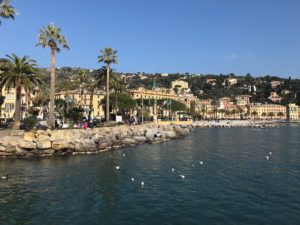 SML and Rapallo are alike in some respects, although Rapallo is larger. Both have a small castle. Both are long established fishing ports (although the fishing fleets of each now form a very small proportion of the boats in the increasingly large marinas) and the crystal clear bay of each is lined with palms and old fashioned hotels with stunning architecture. There’s a definite increase in the number of designer shops in both towns and prices are spiralling but they have a long way to go before they catch Portofino. Also, I didn’t hear much English spoken in either town. It was all Italian. You cannot say that about Portofino. 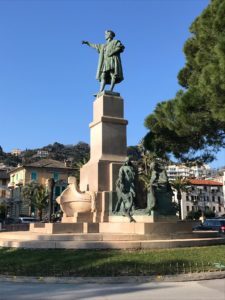 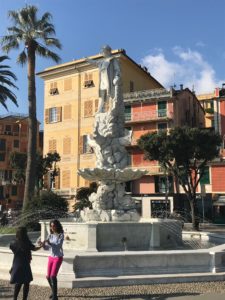 … Rapallo and Santa Margherita each has a prominent statue of Christopher Columbus (see above). He was actually born in Genoa but it seems all the towns in this area lay claim to him 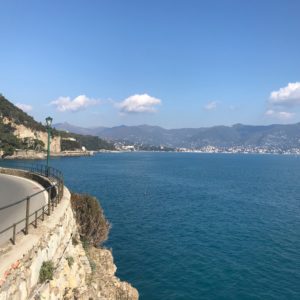 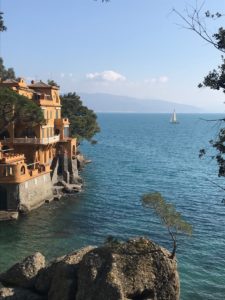 Just over an hour after leaving Rapallo I entered Portofino and; my first impressions? Put simply, it is striking.

I was all set to hate the place. It is described by Lonely Planet as “perfectly coiffured” and “even the trees are handsome”. That sounds so pretentious and plastic. Before I even knew I was going to visit this place today I had formed the view that it as an expensive, artificial tourist resort, attractive only to celebrities, would be celebrities and celebrity seekers. Portofino is expensive and it is a bit of a playground for celebrities (but they have to go somewhere) and there are a ridiculous number of designer shops given the small size of the place and it’s remote location but, otherwise, I couldn’t have been more wrong.

The place is gorgeous. The pretty Piazzetta on the small harbour exudes tranquility and is great place to sit and relax with glass of wine or a coffee. I sat people watching for an hour, simply revelling in the atmosphere. 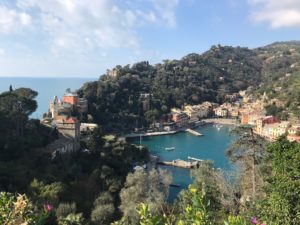 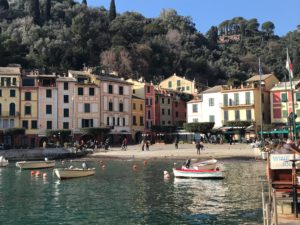 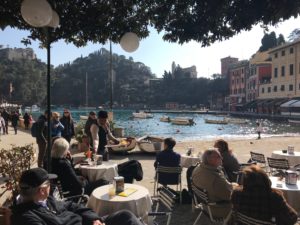 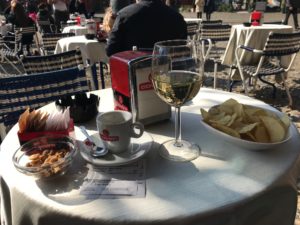 As you look up from the harbour you will see Castello Brown on the left and the Church of St George on the right. There is a short flight of stairs to the right of the harbour that leads up to the church of St George. Beyond that is the Castello Brown. Entrance to the church is free but there is a 5 euros entrance fee into the Castello. I think it’s worth 5 euros of anyone’s money for the views alone. 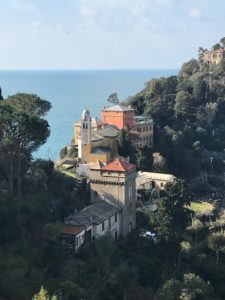 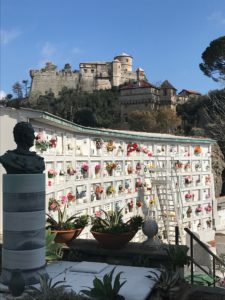 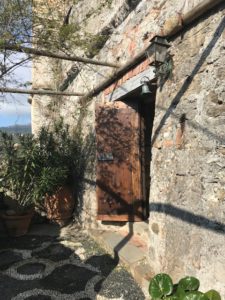 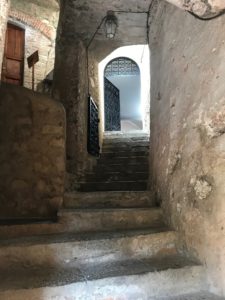 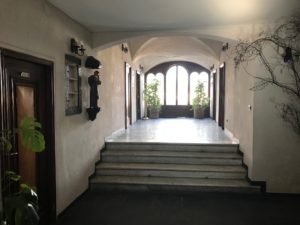 … Inside it is not so much a castle as a private dwelling which, I understand is what Montague Yeats-Brown (British Consul in Genoa) intended it to be when he bought and renovated it in 1867 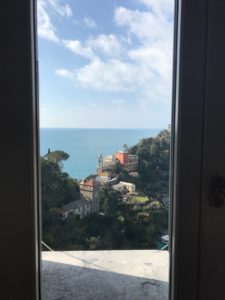 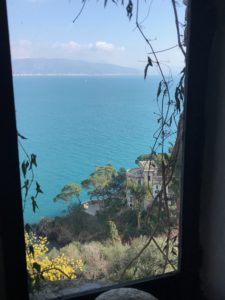 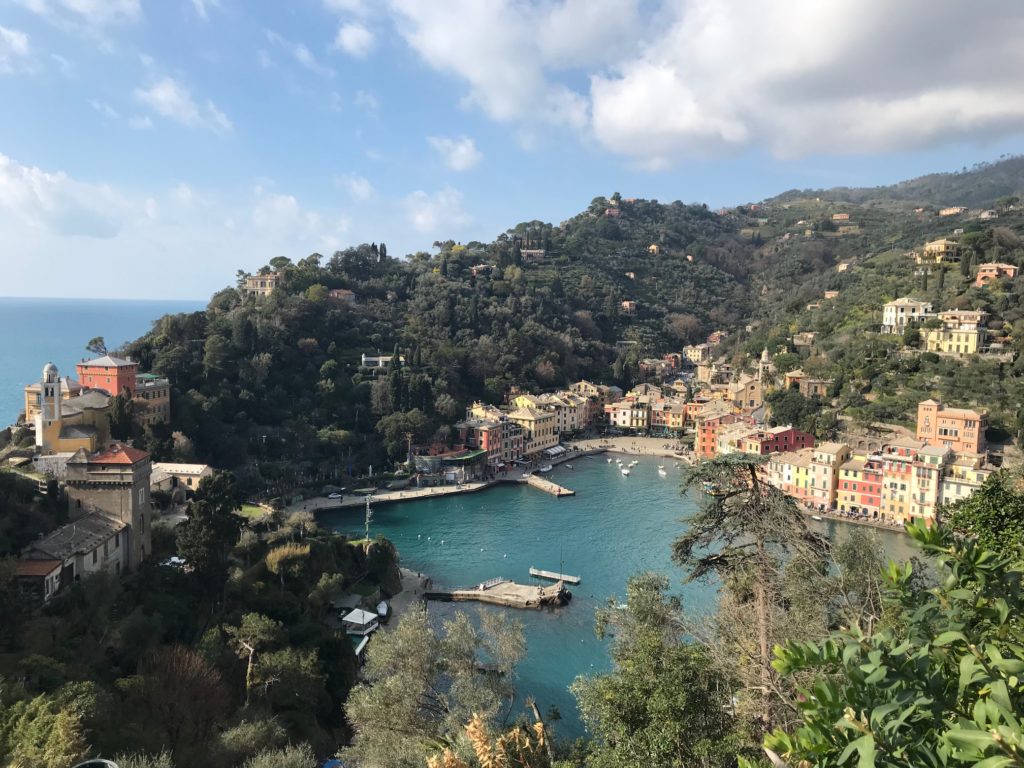 … the views from the windows are stunning

It was a slower walk back to Rapallo. I attribute that to the wine and the sunshine but, I arrived in time to watch the tail end of the carnival (quite what they were celebrating, I do not know) and to have a little look around the town: 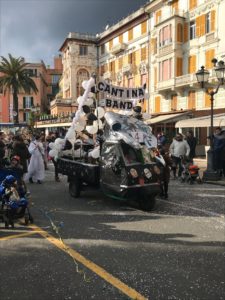 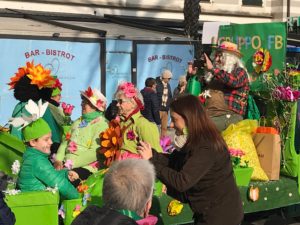 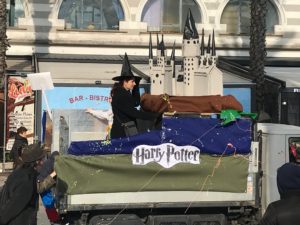 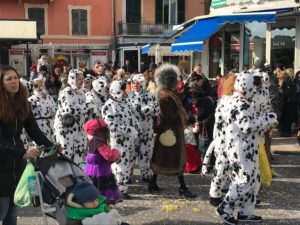 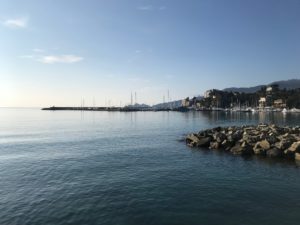 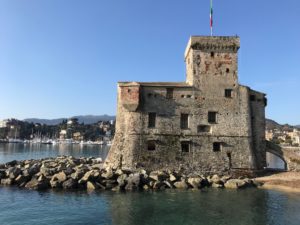 … Rapallo Marina and the Castello