Today is different. Today is about walking the Cinque Terre from one magical village to another and experiencing the journey, the villages and the experience as a whole. I refuse at least for today to enter any castle, any monastery, any church.

Cinque Terre translates as the Five Lands and it comprises five small fishing villages (Monterosso, Vernazza, Corniglia, Manarola and Riomaggiore) strung along the rocky coast of Liguria between Levanto and La Spezia. Until quite recently they were linked by mule tracks and otherwise accessible only by rail or water. This is a beautiful part of Italy; so much so that the Cinque Terre is recognised as a World Heritage Site by Unesco and is now a National Park and Protected Marine Area. The really good news is that the mule tracks have been developed into an excellent trail and it is possible now to walk the route between all five villages and explore them all in the one day (although, if you have longer, why not take two or even three days?).

I started by taking a half hour train journey from Sestri Levante to the largest and most northerly of the five villages, Monterosso, and began my walk from there. North to South is recognised as the best approach in terms of views.

Monterosso is more of a small town than a village and it is dominated by the ruins of a castle and Churches of San Giovanni Battista and San Francesco. I promised to ignore castles and churches today and so restricted myself to a walk along the beach and a morning coffee in the sunshine. Monterosso has arguably the best beach in the area (large and sandy and, more to the point, free. So many beaches in Italy are privately owned and closed to the public – you’d never get away with that in Britain). 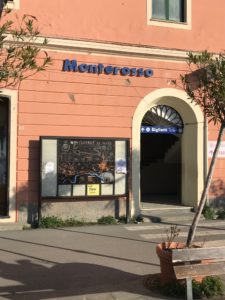 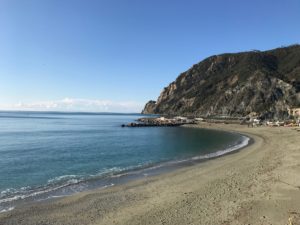 … the exit from Monterosso station brings you out almost directly onto the beach. There’s the view south from the station (see above) and… 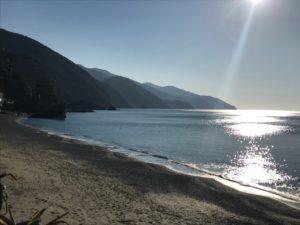 The trail to the second of the five villages, Vernazza, starts from just behind Monterosso Town Hall. There’s a charge of a few euros to use the trail (to pay for it’s upkeep) but this is waived in winter. It’s a well signposted route and, to start with, an easy walk up a stone staircase. Well it would have been easy had I not started on a second bottle of Vino Nobile Di Montepulciano last night. 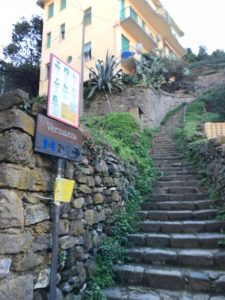 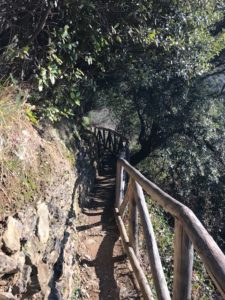 … the start is easily recognised and the steps make for rapid height gain. The trail is good throughout with absolutely no exposure. If anything, there is too much fencing 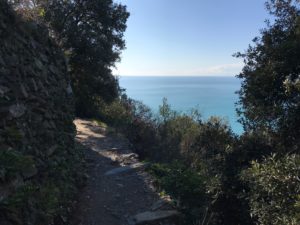 … the views soon begin to open up… 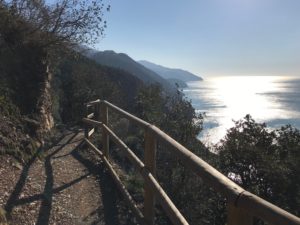 All too soon I was approaching Vernazza. 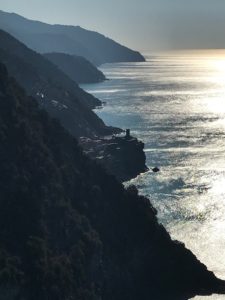 …see above, that’s my first sight of Vernazza from the trail. You can just make out a castle tower on the rock below 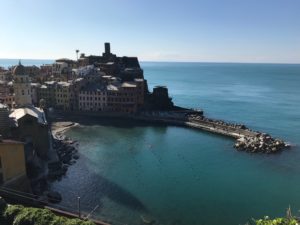 … and there it is in a little more detail. It took just under an hour to walk from Monterosso to Vernazza (that’s without pushing it and stopping frequently to take photos)

The small fishing village of Vernazza (population of just over 1,000) is classified as one of the most beautiful villages in Italy, although you wouldn’t think so if you came in from the back of the village as I did (see photos below). 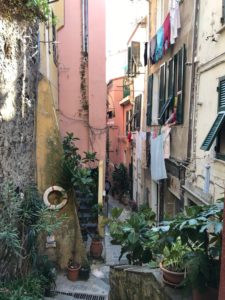 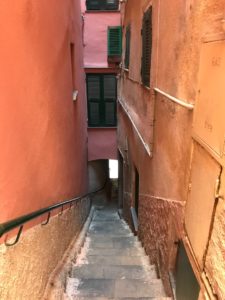 … the trail brings you into the village at the back of the houses and even more washing is hung out at the back than the front. A lady was hanging out her washing as I took the first photo above. Look carefully or enlarge the photo and you’ll see her hanging out the window. Walk under her dripping wet washing and down an even narrower alley and you arrive at the pebbled cove that passes for a harbour and doubles as the village square… 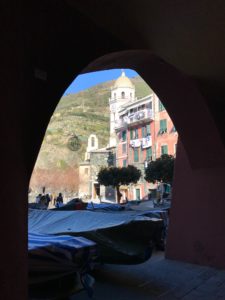 … it’s a very small harbour and in winter or when a red flag indicates bad seas, the harbour restaurants have to remove their tables from the square so that the boats can be landed 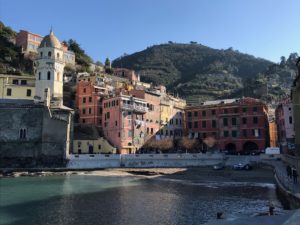 Vernazza is a fascinating and beautiful place with it’s pastel coloured buildings and narrow lanes. Oh, and it has a 15th Century castle (which is really just a watchtower built to provide early warning of pirates) and there is a church built on the rocks – the Church of Santa Margherita di Antiochia. Enough said about those (although I really had to hold myself back from entering the church).

I stayed half an hour or so and then set off on the next stage towards Corniglia. 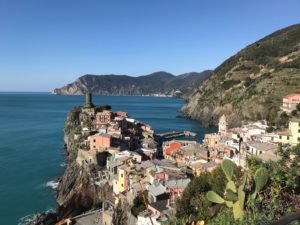 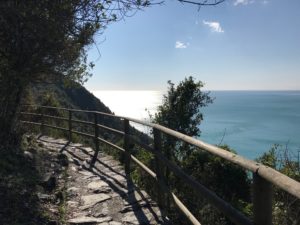 … an already good trail got even better over this second stage not least because it was generally wider. Don’t misunderstand me; the path was wide enough for me throughout but, in the Summer, when there will be hundreds of people walking the trail, I suspect that overtaking and/or passing people travelling in the opposite direction could be a real problem 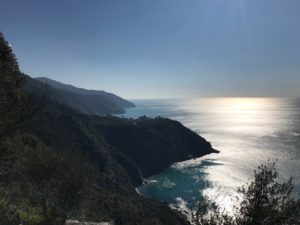 … and above but not that easy to see in the photo is my first sight of Corniglia. It sits on the top of that spur about 100 metres above the sea 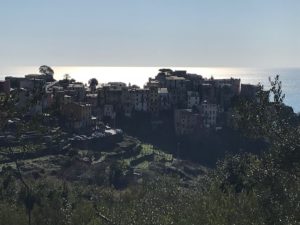 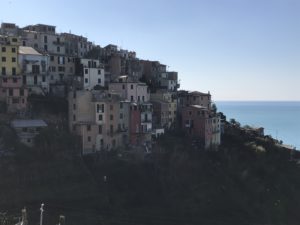 … closer still. It took another hour to travel from Vernazza to Corniglia and again the walk was wonderful, not least because the weather was magnificent all day.

Corniglia is for my part probably the least interesting and attractive of the Cinque Terre but that could be because of the disappointment that ensued.

No mention was made of this at the outset but the trail from Corniglia to Manarola is completely closed and a small part of the trail from Manarola to Riomaggiore is blocked off because of landslides. These two stretches of the trail are the easiest, each being just 2 km long and mostly paved but I was really enjoying the walk and I wanted, especially, to see Riomaggiore. What a bummer but… all was not lost. There’s a railway station at Corniglia and I took the train to Riomaggiore. 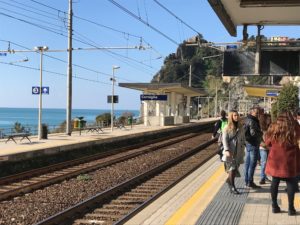 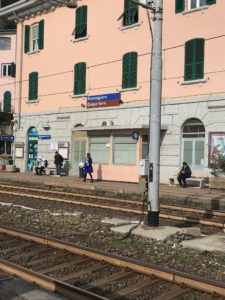 … Simple, really. Train from Corniglia to Riomaggiore. I could have alighted at Manarola but it would have added the best part of 2 hours to my trip because of the poor connection times. Taxis are non starters around here. They simply don’t tolerate non-essential motor traffic in the villages

I would have liked to complete the walk but I don’t regret taking the train to Riomaggiore. It is the most southerly of the small fishing villages that form the Cinque Terre. Like Vernazza and Manarola, Rio consists mostly of old pastel coloured stone houses that are either cut into or cling barnacle-like to the sides of a steep rocky gorge: 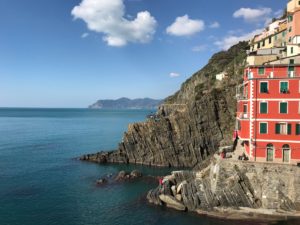 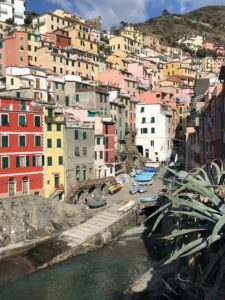 I had lunch there (a bottle of the local white wine and Gnocchi with Shrimp and Spicy Sausage both at tourist prices), explored the place, walked almost all of the Riomaggiore to Manarola section from the other end of the Cinque Terre (until I reached the closed off part) and took the late afternoon train back to Sestri Levante. Except for having to pay silly money for lunch it was a great day and one I would repeat. 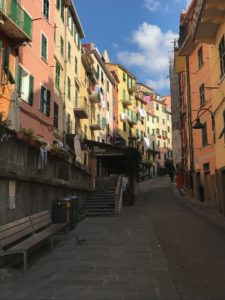 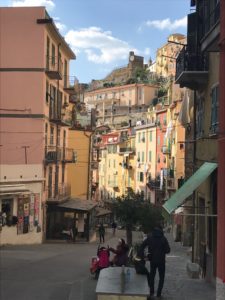 … Above, there’s just the one main walkway to take you up and down from the small harbour but there are a number of smaller paths filtering off this walkway, especially on the north side 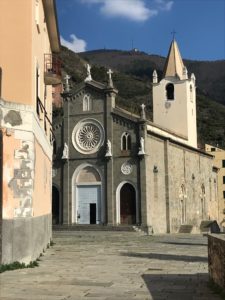 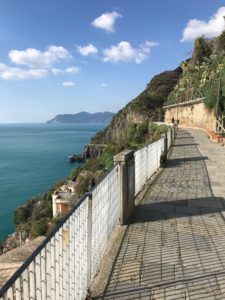 … there’s a fine looking church on the left (the Church of San Giovanni Battista of Riomaggiore) and; the path I stood on to take this photo leads to Via dell’Amore – see second photo – which is the paved path that forms the last section of the Cinque Terre and goes all the way to Manarola.