Personal issues require that I return to the UK and yesterday morning I decided that the planned tour of Calabria and Sicily must wait for another day (the summer?). I turned the Van northwards and made for Pompeii. Then it is to Rome for the Italy v England 6 Nations Rugby match on 4 February and thereafter I will plan my route / itinerary back to the UK. Having said that there’s a few more blogs to be posted before this particular tour is concluded.

The 400 km drive to Pompeii was easy, mostly motorway, and my only grumble was with the weather. I was leaving 25 degrees of warm sunny weather and heading towards the currently cold and wet west coast. Here’s hoping it improves, especially for the rugby match. 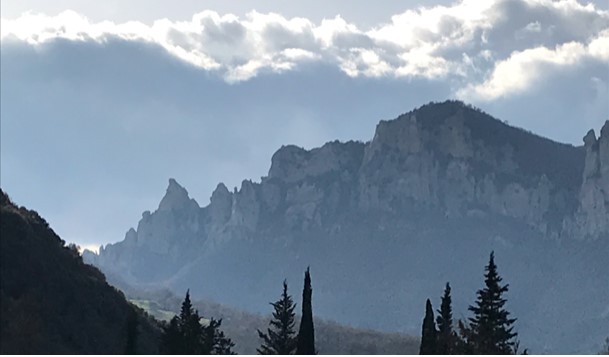 … nice hills on the way over to the Campania Region. They too will warrant a return visit

Upon arrival in Pompeii, I parked up in the Fortune Village Campsite directly opposite one of the main entrances to the archaeological site. I had the campsite to myself but the archaeological site, large as it is (170 acres have been unearthed to date), was packed with tourists and I elected to leave my visit until the next morning before the hordes arrive.

To set the scene ancient Pompeii was a Roman port with some 10,000+ residents when following the sudden and violent eruption of Mount Vesuvius on 24 August, 79 AD, it was buried under 7 metres of pumice and ash. The only good news from a historical perspective was that the city’s sudden burial served to protect it for more than 17 centuries from vandalism, looting and the destructive effects of climate and weather. Unfortunately, some of those who began the archaeological “dig” after Pompeii was rediscovered in 1748 were not sufficiently skilled in excavation techniques and caused not inconsiderable damage to what was left of the city (and there was a great deal of looting too) and then, as if that wasn’t bad enough, during the summer of 1943 the US Twelfth Air Force Bomber Command dropped no fewer than 150 bombs on the place.

The next morning, I was amongst the first to visit the site and I made straight for the Forum (which is fairly central to the site and it is around which most of the city’s focus would have been) with a view to seeing the site from the inside out. I allowed myself 3 hours to explore Pompeii and I should have allowed 5 to do the place justice. It is a fascinating place notwithstanding that most of the remaining treasures and frescoes have been removed to various museums, particularly the Archaeological Museum of Naples. 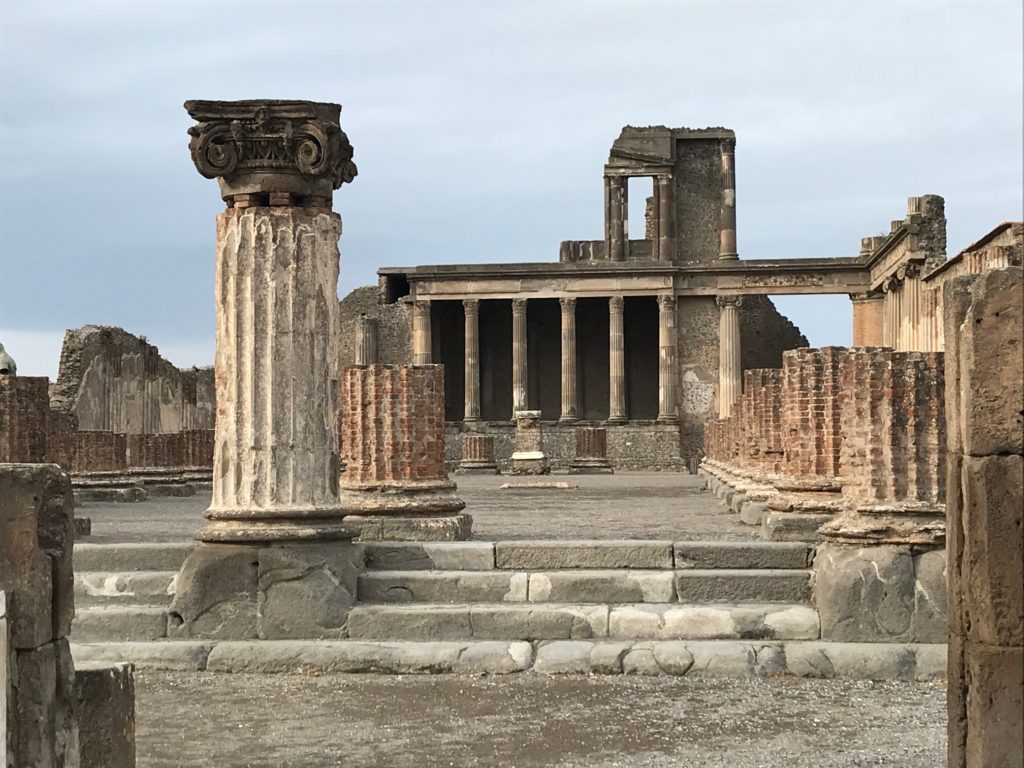 … in the south west corner of the Forum is the Basilica of Pompeii where business and legal matters were debated and where lawyers without clients, teachers without pupils and artists without commissions, etc would tout for business. This particular example was built between 130 and 120 BC 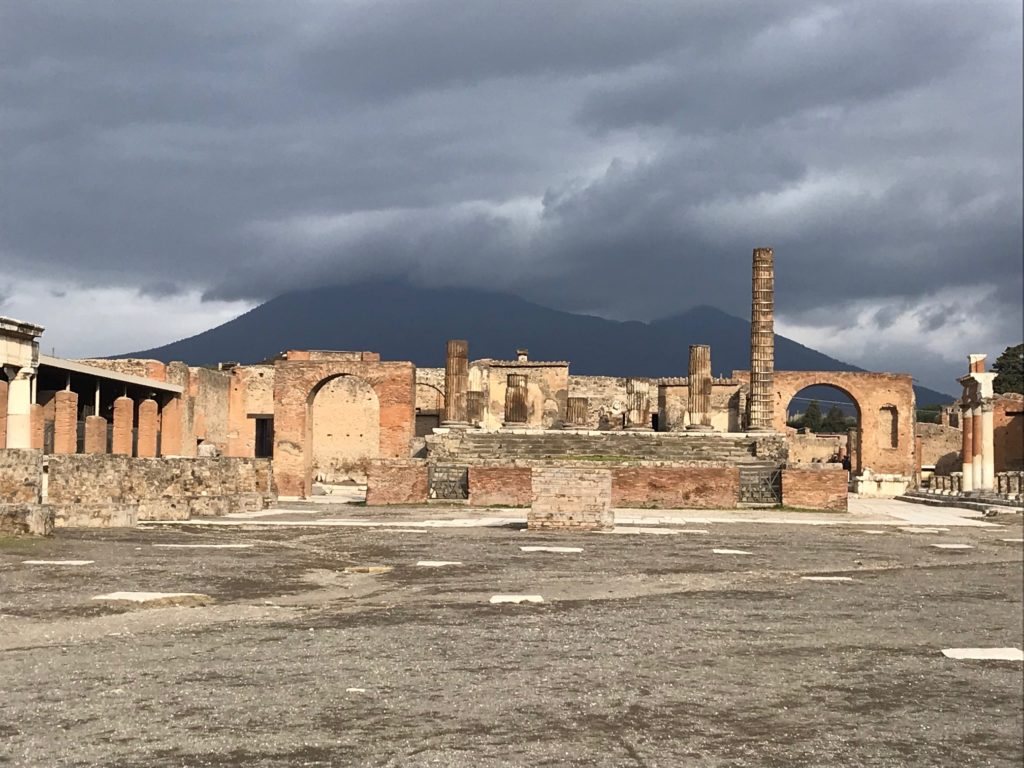 … the northern end of the forum contains what remains of the Temple of Jupiter and 3 of 4 honorific arches. Initially, the buildings were constructed of dark volcanic stone but in the 1st Century AD white limestone was introduced (see columns on extreme right) 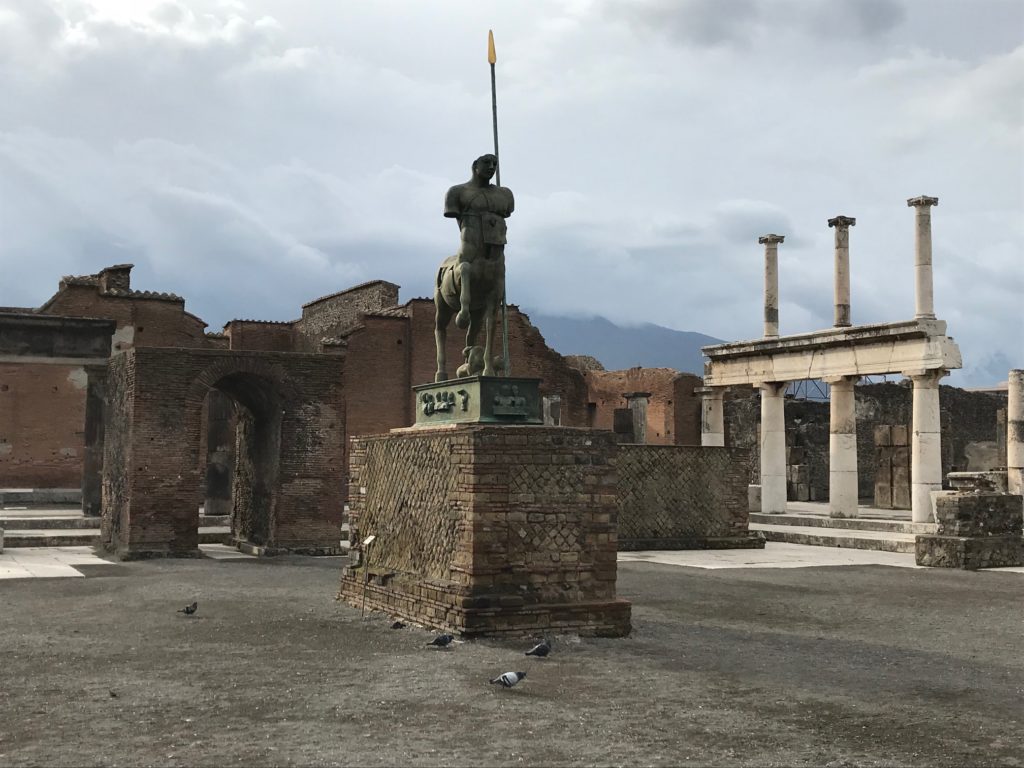 … Statue of a Centaur on the south side of the Forum. More limestone columns to the right of this photo. 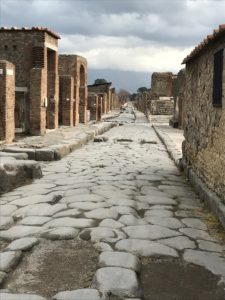 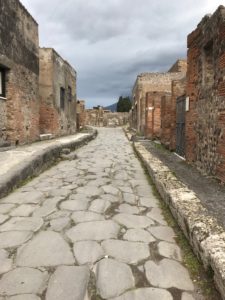 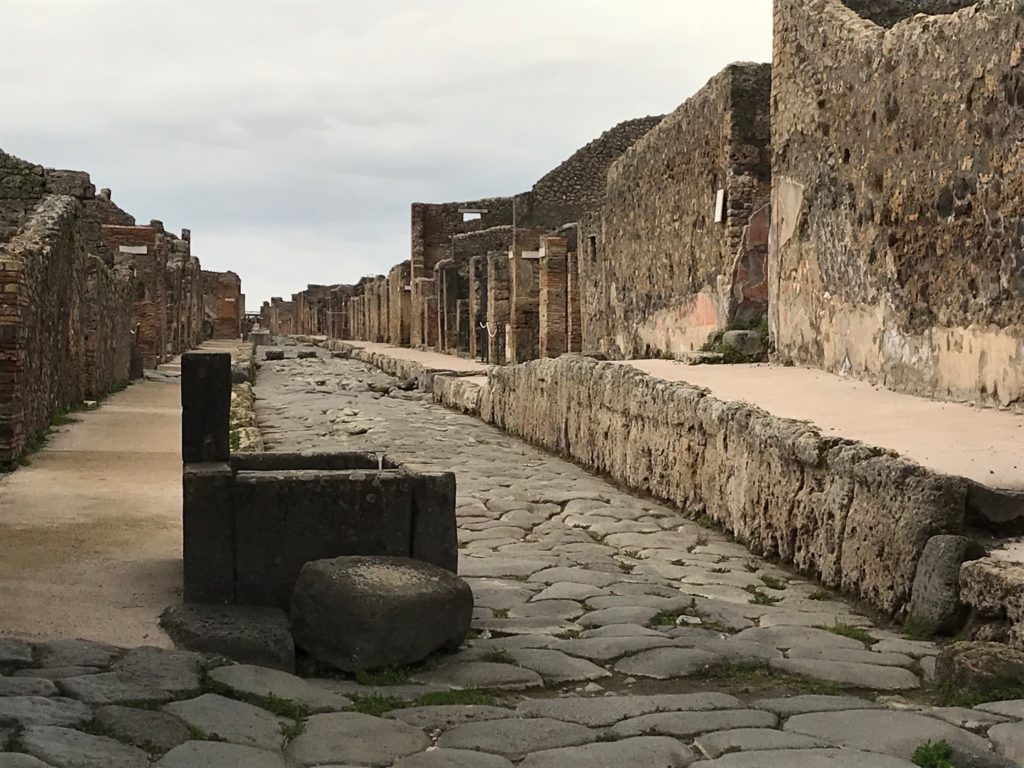 … Pompeii streets. Not a tourist in sight. I timed it perfectly!!

It was not so much the civic buildings, but the private residences, bars, shops and bath houses that I found most interesting. Walking around Pompeii is so much more than a history lesson. This was a real tragedy with an estimated 2,000 people losing their lives as a result of the eruption and seeing the homes, pubs, shops  and personal effects of those that lived in Pompeii and died such a violent death there makes the visit so very more poignant. And if that is not enough seeing the plaster casts (in places like the Granary, Stabian Baths and Garden of the Fugitives) of victims caught at the precise moment of their death makes the whole Pompeii experience so more “proximate”. 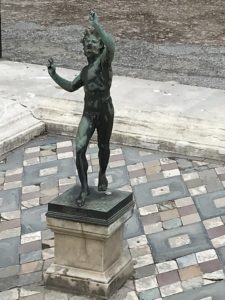 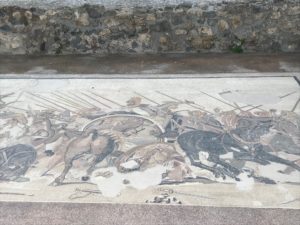 … some details from Casa del Fauno. The House of the Faun (named after the bronze faun statue standing in the impluvium which was designed to catch rain water) is one of the largest and more impressive private dwellings and it is thought to have been owned by a Cassius Satria. The mosaic inside the House depicts Alexander the Great’s victory over Darius III of Persia at Issuss in 333 BC 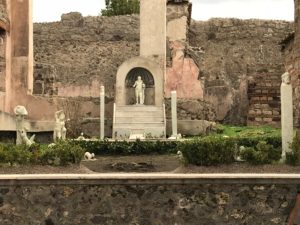 … part of the garden of the house of Marcus Lucretius Fronto, said to be a cultured man with a great political career. This is one of the most richly appointed properties to have been unearthed with, tragically, the crushed skeletons of a group of 5 adults and 3 children inside. It is believed the roof collapsed during or after the initial eruption. 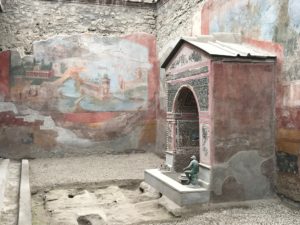 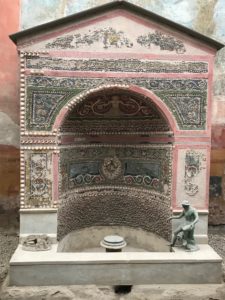 … Casa di Fontana Piccola – the House of the Little Fountain (House Number 18 on the Via di Mercurio). No one knows who lived in this property. 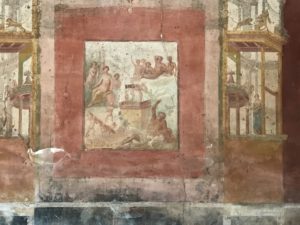 … mural (from the House of the Vetti?)- 2 brothers, Aulus Vettius Conviva and Aulus Vettius Restitutus, believed to be wine merchants lived in the house of Vetti 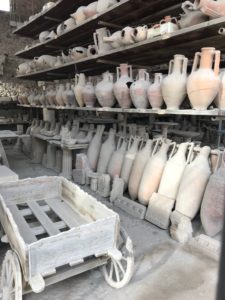 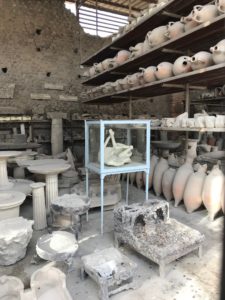 … the granary with innumerable amphorae (storage jars). The second photo includes a cast of a dog frozen at the moment of it’s death 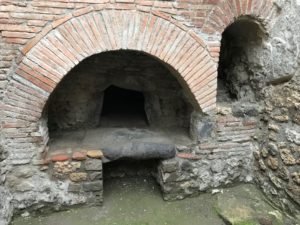 … the oven from one of 34 bakeries unearthed in Pompeii 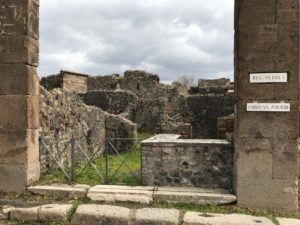 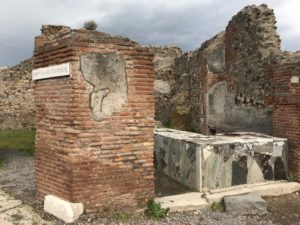 … the Sun and the Fortunata Public Houses. I am told there were many more taverns than bakeries in Pompeii. Some things never change. 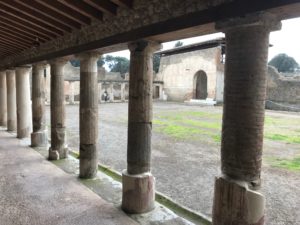 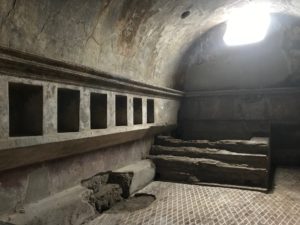 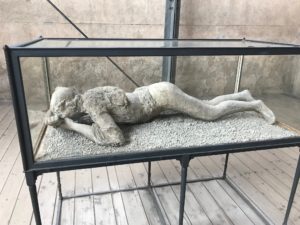 … the Stabian baths and the cast of yet another casualty found in the grounds of the baths.

I wasn’t too sure about going to Pompeii but it proved an unusual and moving day and I would certainly revisit the place (allowing 5 hours next time). Moreover, I’d combine the trip with a visit to the Archaeological Museum of Naples. Highly recommended (if you can beat the crowds).