This Gallipoli is nothing to do with the site of the First World War battle (which was in Turkey). This one is a fishing port and beach destination on the west coast of the Salentine Peninsula in the heel of Italy and it’s name is derived from the Greek Kallipoli, meaning “Beautiful City”. It is known by some as the “Pearl of the Ionian Coast”. 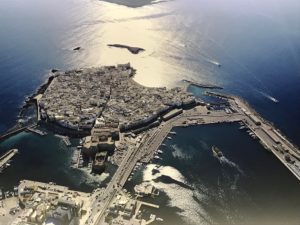 Gallipoli Old Town (not my photo). The large building alongside the bridge is the island fortress of Castle Angioino. The old fishing port is to the immediate left of the castle as you look at the photo. The much larger commercial port is to the right.

The first thing you encounter as you cross the bridge into the old town is the 13th century fortress, Castello Angioino Gallipoli (largely rebuilt in the 15th century). Off season it costs 5 euros to view the castle and you are allowed on the ramparts – hurrah!! It’s not a bad little castle and it was made all the more interesting because a local authority had organised an exhibition of some of Jacob Philipp Hackert’s works. I learned that he was a German Neoclassical landscape artist who became court painter to Ferdinand IV of Naples but I can’t say I like his work. It’s all a bit cold. No matter, it made for a pleasant change and we are long overdue some culture in this blog. 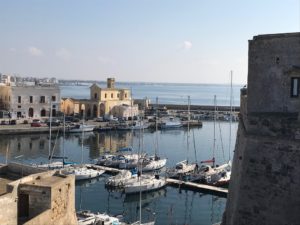 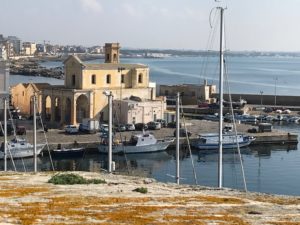 … There’s a couple of pictures (mine, not Hackerts) from the castle ramparts towards the mainland. The church is the Santuario di Santa Maria del Canneto

The receptionist in the castle was a charming chap who went out of his way to advise me as to what to see on the island and how best to navigate the narrow tortuous streets. He recommended that I venture first into the lanes to visit the cathedral of Saint Agata and then walk the perimeter of the island, perhaps stopping off for lunch at one of the many fish restaurants and finishing off at the fishing port and beach. Who was I to argue?

The first thing you notice as you enter the lanes is that the old town is lived in. It is mostly residential with just a few offices and shops although, I was told that an increasing number of cafes and restaurants are opening as the town responds to a burgeoning tourist trade. The second thing you notice is that it is almost like stepping back in time to the 1960’s. The place is full of Vespa and Lambretta motor scooters and many of the limited number of cars on the streets are original Fiat 500’s.

The best find in the lanes, however, was a general store which reminded me in some respects of the tv sitcom “Open All Hours”.  Every nook and cranny of the shop was crammed with such a variety of merchandise and the proprietor was an Italian “Arkwright” who followed me round the store, picking up and showing me various produce and talking non stop in sing song Italian about God only knows what. He didn’t seem to notice that I couldn’t understand a word and when I started smiling and then giggling at his antics (you know how it gets to you when you want to laugh but must not?) he just joined in. The pair of us were giggling and laughing like schoolkids for a fair while. Thankfully, no one else was in the shop and in the end I bought some bread and fruit just to get out of the place. 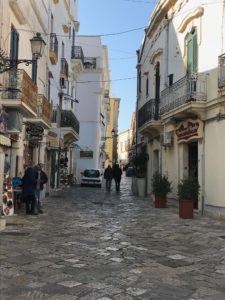 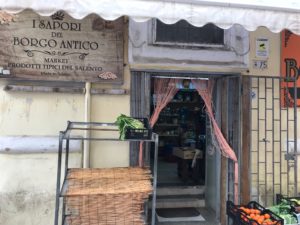 …One of the principal lanes on the island (which led to the cathedral) and “Arkwright’s Store”. Just looking at that photo makes me smile. 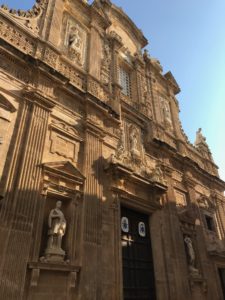 … The Basilica di Sant’ Agata. I was hemmed in by the lanes and couldn’t get more into the picture

The walk around the perimeter of the island would probably take only 30 to 40 minutes but it took me almost 3 hours. I kept stopping to take in the sites (and read restaurant menus). There were two particularly long stops. The first was to enjoy a couple of glasses of a dry white Salento wine and a small plate of Gambieri Crudi (raw prawns served whole after being doused in lime juice and covered in various herbs) and the second was to watch and listen to (although I couldn’t understand a word they said) a small group of men sitting in the old fishing port in the sunshine mending their nets and talking.  A couple of them were selling sea urchins to passers by from a temporary stand. It seems sea urchins are a speciality of the town. 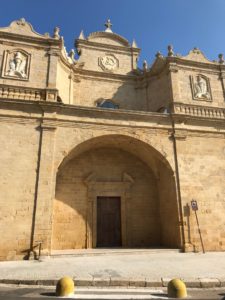 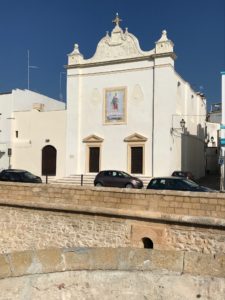 … A few of the smaller churches or chapels on the island. I know the first one is the church and former convent of St Francis of Assis but I don’t know the names of the others.

The final act of the day was to head down from the town to the old fishing port and it’s mole (remember the Trieste blog – that was a mole) and then round to the long golden beach of Spiagga della Purita (Beach of Purity). 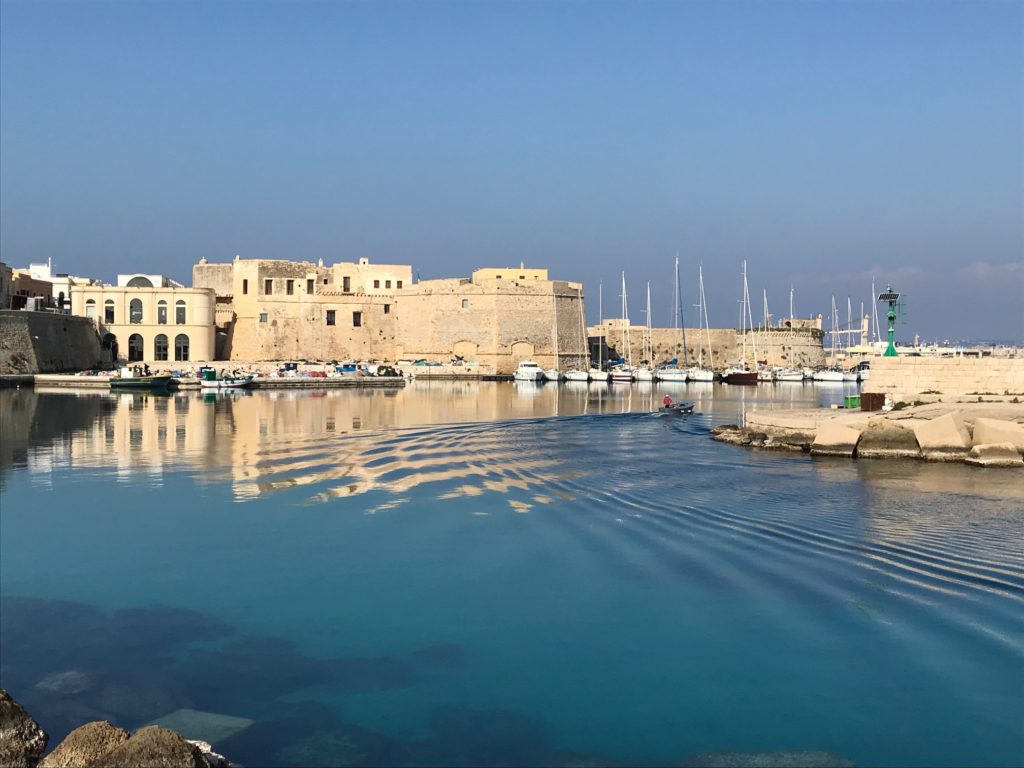 … a photo from the mole of the fishing port and castle. The Beach of Purity was empty except for a great deal of litter (which one hopes will be cleaned up before summer)

Well, not a bad day. The receptionist at the castle did me proud with his suggestions.