I came to the small seaside town of Sestri Levante as I need to keep moving north but also because, weather permitting, it is a reasonable starting point to walk the Cinque Terre. If the forecast is correct, the weather will improve over the next day or so and I am therefore leaving the Cinque Terre until tomorrow. Today was about Sestri Levante and a short coastal walk out to the Punta Manara and then on to Riva Trigoso.

It took me less than 15 minutes to walk to the heart of Sestri Levante. The town was originally built on an island but time, soil & sand and the ocean currents created the isthmus or promontory that is modern day Sestri Levante with the Baia del Silenzio (Bay of Silence) to the south and Baia delle Favole (the Bay of Fables) to the north. The latter was named in honour of Hans Christian Andersen who lived here for a period in 1883. 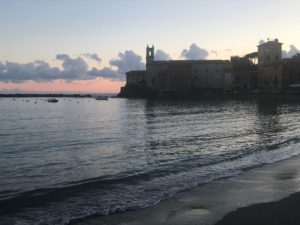 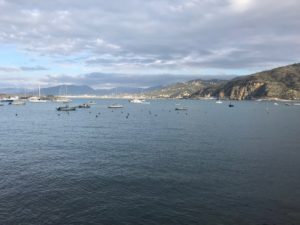 Until quite recently, Sestri Levante was little more than a fishing village and it is only now that tourism is starting to take a hold but even so, this town is unlike most of the other tourist spots on the Ligurian Riviera in that food and wine remains cheaper, there’s not a designer shop anywhere within the town precincts and it is almost entirely Northern Italians who holiday here.

Via Nazionale and the wholly pedestrianised Via XXV Aprile are the main shopping streets and while there are an increasing number of bars and restaurants opening, these two streets are still packed with small shops selling local produce (bread, wine, olive oil, cheese, salami and pasta and not forgetting ice cream – I tried the local cherry flavoured ice cream today; my first ice cream since arriving in Italy). There are also a number of (non designer) clothes boutiques but I can’t say I paid these particular shops any attention at all. Some of the shops looked very interesting and you could spend many hours here just window shopping and/or browsing. 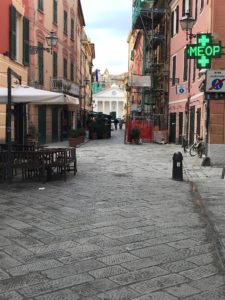 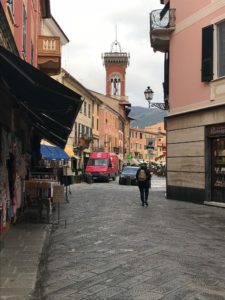 There weren’t too many tourist type sites to see (no castle, no monasteries nor convents and relatively few churches by local standards). It is a place to chill; to eat, drink and relax although, as intimated above, it is within easy reach of many interesting hiking trails both inland and along the coast and I dare say that all sorts of water sports are available in the summer. In this latter regard, I understand they run whale watching tours from here. I was unaware the Mediterranean had any whales. 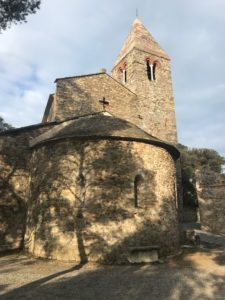 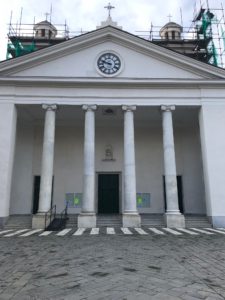 … just two interesting churches so far as I was concerned. The first was the tiny Chiesa di San Nicolo which looks to have been boarded up at least for the winter. The second was the Santa Maria di Nazareth, with its impressive neo-classical portico. Inside, this latter church was somewhat special… 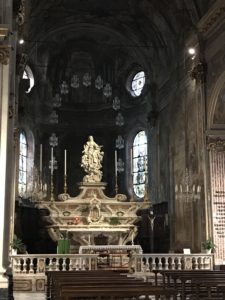 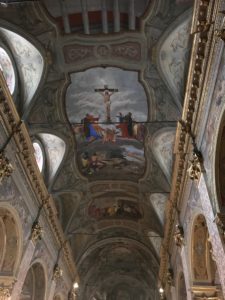 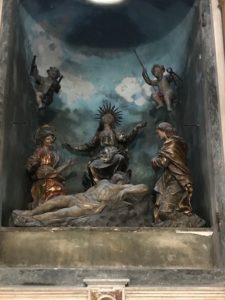 … the inside of the Santa Maria di Nazareth was magnificent.

After exploring the town, spending most of my time taking photos down at the harbour and in the Santa Maria di Nazareth, I set off on my coastal walk which comprised three stages. Stage 1 was from Sestri Levante along the cliff tops to the Punta Manara headland. Stage 2 was a walk around and down the other side of the headland into the village of Riva Trigoso (for a late lunch). Stage 3 was a walk back to the Van from Riva Trigoso, taking in the Church of St Bartholomew on the way.

Branching off the Via XXV Aprile is a small lane (the Vico del Bottone) which leads to the Punta Manara trail. This trail is a short, easy, well marked coastal walk with no real exposure until you reach Punta Manare itself, where there is short rock staircase that leads to a narrow ridge at the end of which is a fine viewpoint. It took less than an hour to reach Punta Manara, passing just two people on the route (both going the other way) and there were some great views: 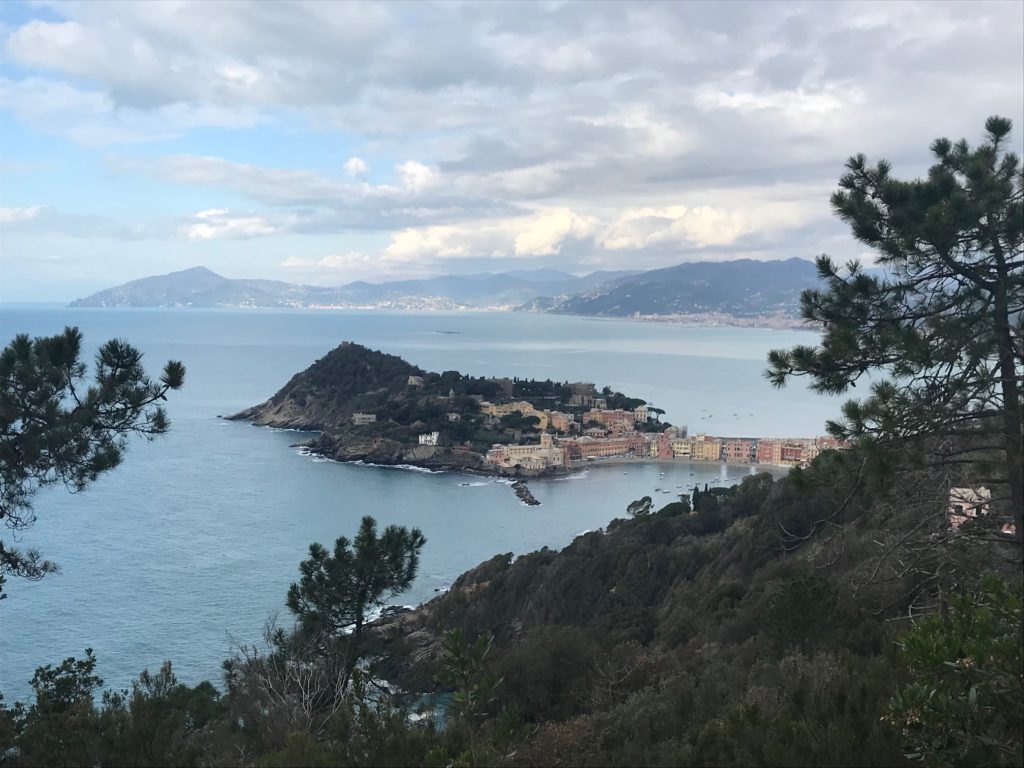 … a view back to Sestri Levante and… 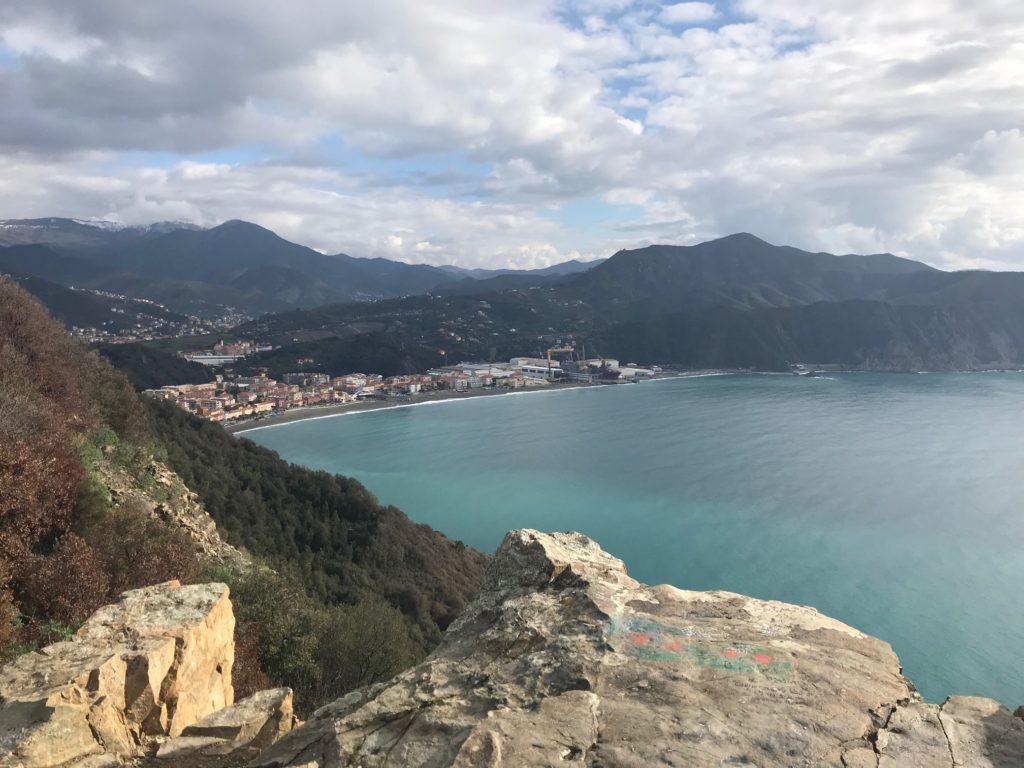 … the view down to Riva Trigoso from Punta Manara and… 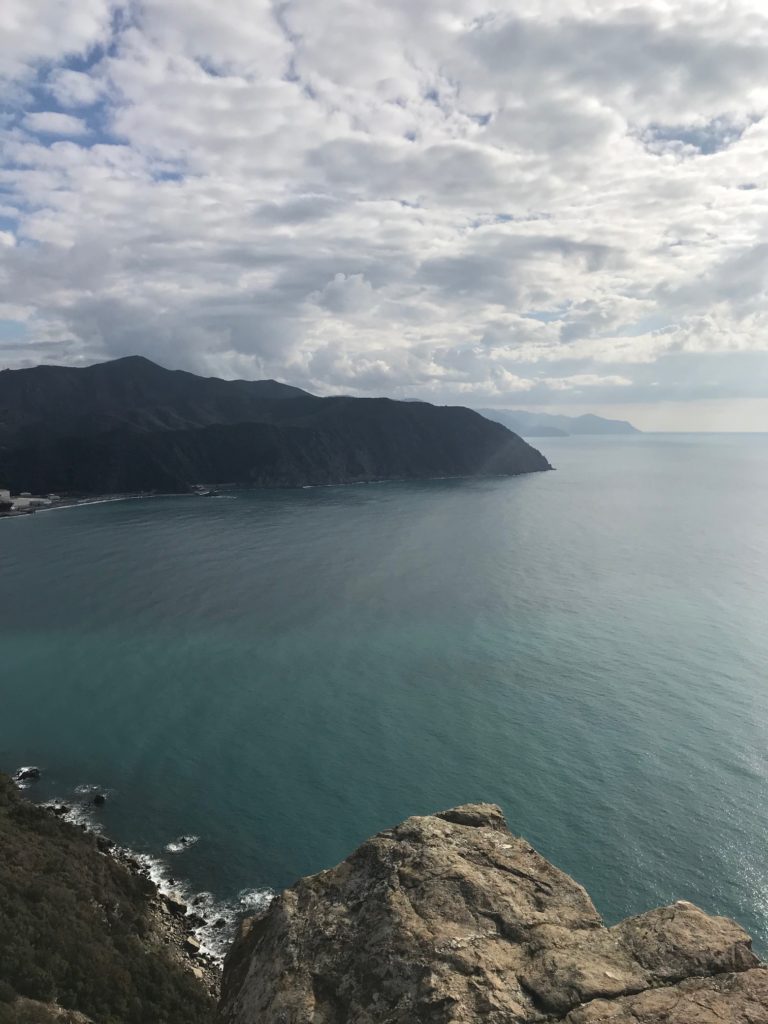 … the view south from Punta Manara and… 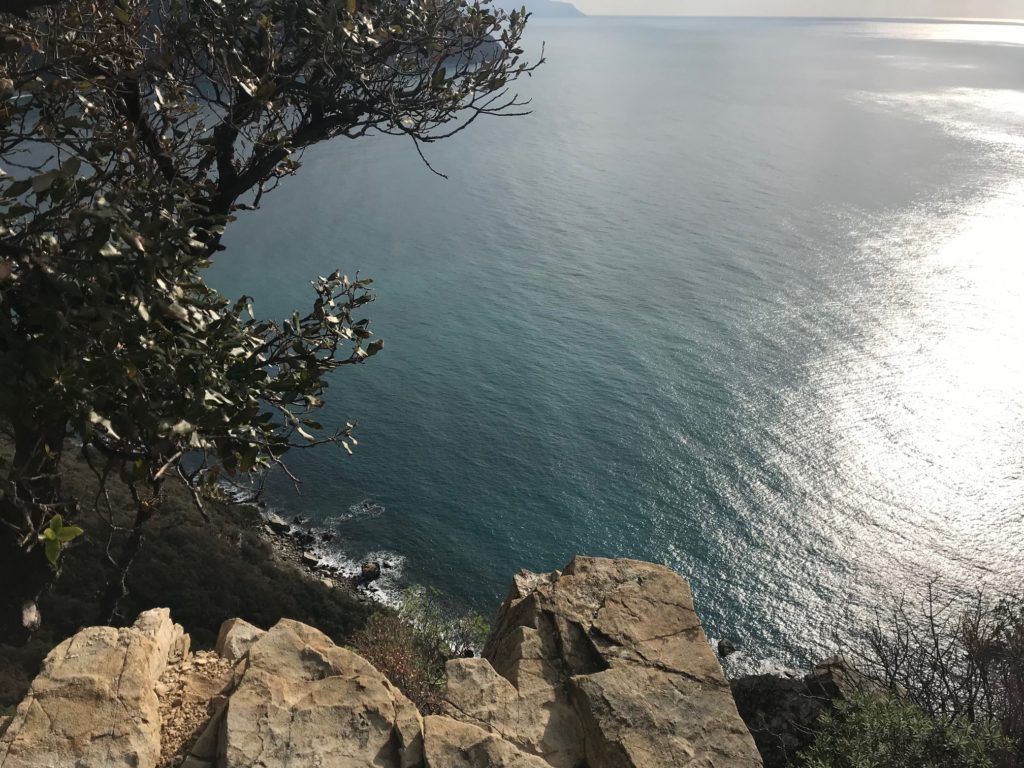 … the view down from Punta Manara

I pottered around for a while on the Punta Manara but within the next hour was sitting in a Riva Trigosa restaurant with a roast chicken dinner and the local white wine (just a half litre – I still had to get back to the Van) and capped it all off with an expresso. You order coffee here and an expresso is all you will get. It’s very Italian. I think the total cost was just over 10 euros and there was so much I couldn’t finish it – the food, not the wine.

The one hour walk back was mostly uneventful but I was impressed with St Bartholomew’s: 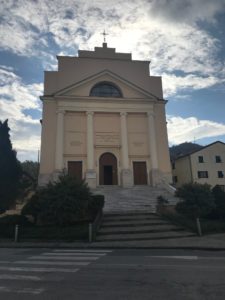 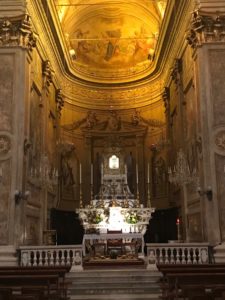 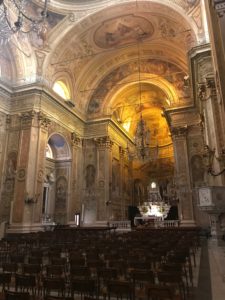 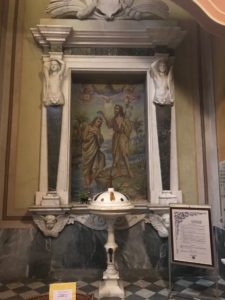 The weather improved throughout today. Here’s hoping it remains so for tomorrow.

I’ll leave you with a couple more photo’s taken in Sestri Levante but don’t ask me to explain them because I couldn’t but, they looked interesting: 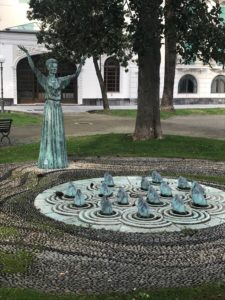 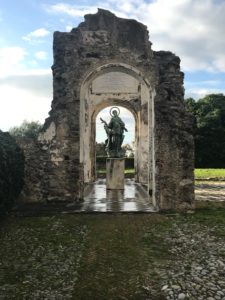