Yesterday was to some extent a write off. The weather was awful but that’s to be expected when you journey into the hills in winter and I’m not complaining. Today was about travelling 150 miles further north to Sestri Levante which is on the Med coast in the Italian province of Liguria but; I also wanted to visit the town of Volterra and I tailored my route accordingly. Both the journey and Volterra were enthralling.

My route was made up of two parts. The first was along a series of good country roads that wound through delightful Tuscan countryside and took me through the town of Casole d’Elsa to Volterra (and then on to Pisa). The second, from Pisa, was mostly motorway (the A12) which took me past Massa (famous for it’s Marble) and La Spezia (the port city and naval base). I will reflect only on the first part.

I didn’t intended stopping at Casole d’Elsa. From a distance it looked just like any another Tuscan hilltop walled town and I simply don’t have time to view them all. However, this place stopped me in my tracks. 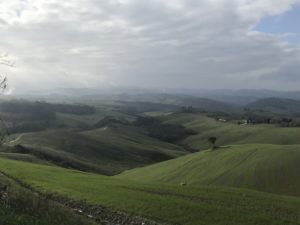 … the roads were fine; the countryside beautiful (and the weather was doing it’s best to brighten up) 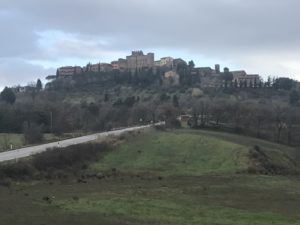 … Casole d’Elsa looked just like any other small hilltop town

As I drove through the town I noticed some tree sculptures by the side of the road and I stopped to look:

… hear no evil, see no evil, speak no evil. Well, they make a change from carved squirrels and rabbits and the like (which are commonplace around Cheshire)

There were various other carvings but this place wasn’t just about wood sculptures: 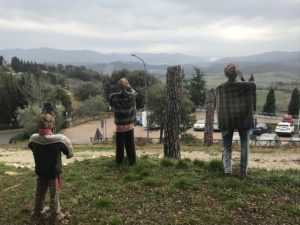 … the above was entitled “Immigrants” (particularly apt given the increasing number of Syrian refugees making for Italy at the moment) but, at the risk of appearing a bit of a Philistine (sorry, I shouldn’t have said that), I think “Zombies” would have been a more appropriate title. Imagine bumping into them on a dark night on the way back from the pub?  Worse than wild boar. 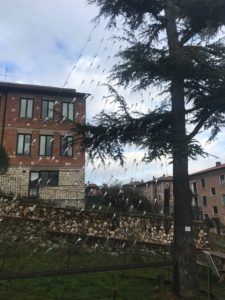 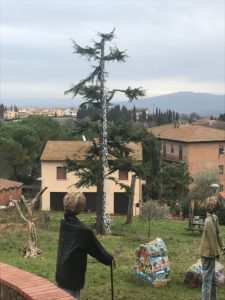 … difficult to photograph but this was my favourite. I prefer the sideview. Simple but effective. This work was created by Giampiero Muzzi and there was an accompanying poem some of which I reproduce below:-

“Crystal pure spermatozoons are flying high in the sky….. A rain of miniature shining seeds will fall on Earth. From then onward the men who who will come into the world will be better than their predecessors. Better than us”

I subsequently discovered that Casole d’Elsa is home to the (world-renowned) Verrocchio Art Centre. Perhaps these pieces were produced by students of the VAC? Who knows?

Not long after leaving Casole d’Elsa I arrived at Volterra. Wow! But, I’ll let the photos do the talking: 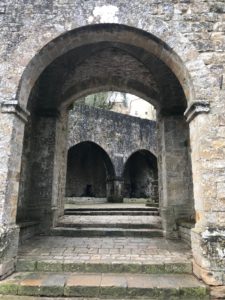 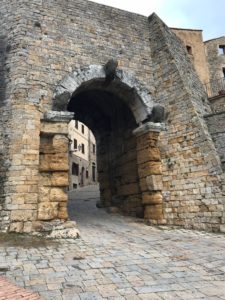 … the gate on the left is the one I used to enter this old Etruscan city. The gate on the right, the Porta All’Alco  is one of two out of seven gates into Volterra that can be traced back to Etruscan times (400 BC). I understand the large blocks are Etruscan 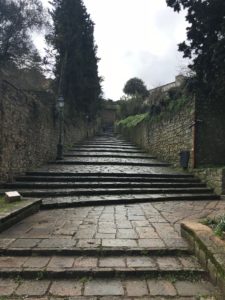 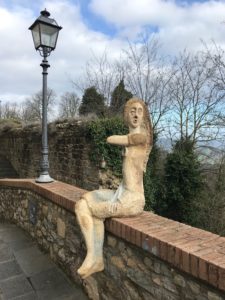 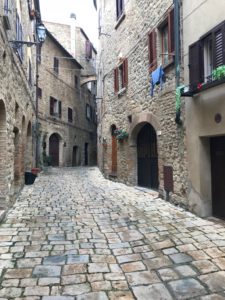 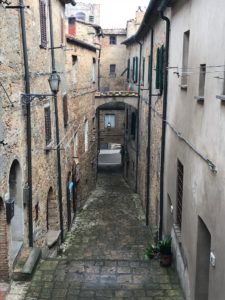 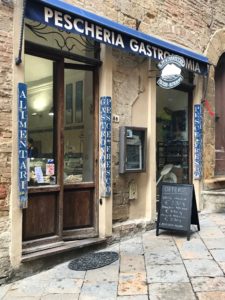 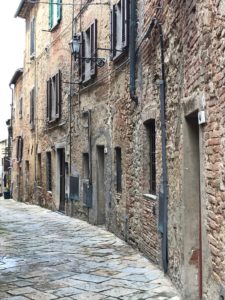 … I excluded people from these photos but the lanes are lived in. There was a butcher’s shop, a baker’s, a fishmonger, a flower shop and an ironmonger’s and the people I passed were … well, they were doing normal things – walking dogs and dragging disobedient children around the shops and; older people were limping home with shopping bags that were far too heavy and; it seemed everyone knew everybody else and they stopped and talked to each other and…  there wasn’t a tourist in sight (except me and; I was doing my best to look normal). It was real life.

And then I arrived at the Piazza dei Priori and found the Palazzo dei Priori (that’s it on the right): 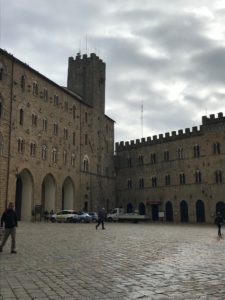 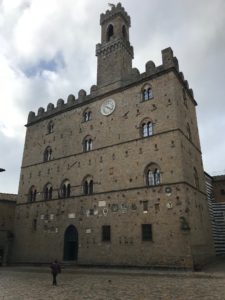 … it seems the Palazzo was the setting for the “Twilight” books and TV series by Stephenie Meyer and where the elite vampires, the Volturi, live. Sod’s law, this place is fast becoming a mecca for teenage vampire fans. No comment

Back to reality. Volterra has a castle known as the Fortezza Medicea but, as spectacular as it looks, it is not one that I want to enter: 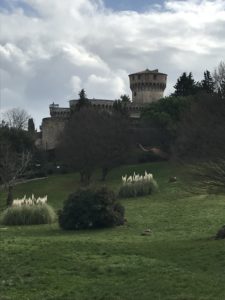 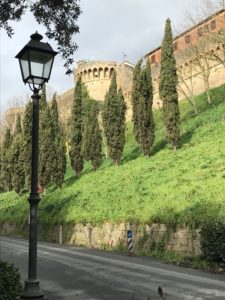 … the Fortezza Medicea has been converted into a maximum security state prison. The prison operates a rehabilitation restaurant and, periodically, serves gourmet meals to the public

Then there was the Amphitheatre: 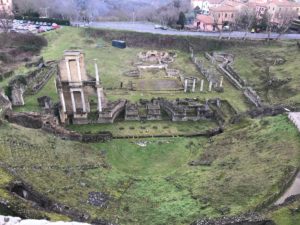 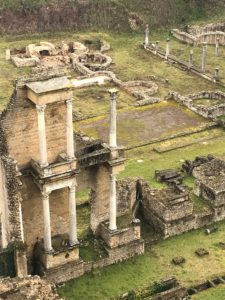 … the first thought that crossed my mind when I saw this was as to whether or not the rows of seats in the theatre were originally grass as opposed to stone (methinks grass would have been more comfortable to sit on).

I think I must have walked every lane of Volterra at least 3 times and I stopped both for brunch (a great slice of pizza just off Piazza dei Priori) and a late afternoon tea (apple pie on the Piazza XX Settembre). This latter Piazza is worth a couple of photos: 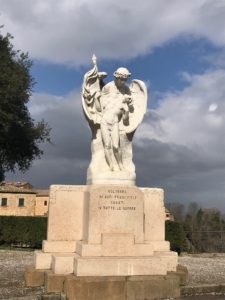 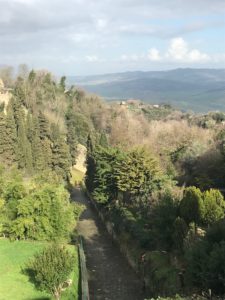 … the first photo is of a non partisan war memorial; the second is of my route back down to the Van; both taken from the Piazza XX Settembre

A thoroughly enjoyable visit. I was intending to finish with some photos of the Cattedrale di Santa Maria Assunta. The outside of the cathedral does not look much but the nave and altar are very impressive. However, if you have been following this blog you will, of late, been “churched” out. So, given that we started with a little culture in Casole d’Elsa, I’ll finish with the same from Volterra: 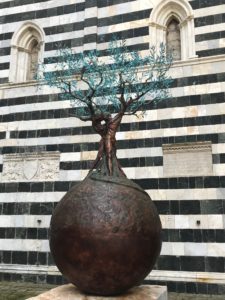 … this is a bronze by Andrea Roggi simply termed “We Are Part Of The World – Tree of Life”. Okay, it’s a bit of a mouthful but I like the bronze