Okay, the itinerary for today was a little ambitious. Four Toscano villages? Impossible if you want to do them all justice. Three was okay and I nearly made it, actually parking up in Pienza, but I had spent longer than anticipated in both Montalcino and San Quirico and the weather turned foul so I gave up on both Pienza and Montelpuciano. Two’s fine. There’s always tomorrow.

Montalcino is a small hill town in Tuscany with a population of about 5,000 and amazing views over the Asso, Ombrone and Arbia valleys. It is reputed to have the warmest and driest climate in the whole of Tuscany (although today it was neither warm nor dry) and it is home to the famous Brunello Montalcino wine. Tuscany is well known for Chianti but it’s best wines are the Brunello and the Vino Nobile from respectively Montalcino and Montelpuciano. That is why this area of Italy was always going to be of interest to me. I planned to visit an Enoteca or two to sample the local wines, especially the Brunello. Enotecas are wine tasting shops not unlike the Austrian “heurige” mentioned in one of the Austrian blogs but they stock a wider selection.

The drive to Montalcino was beautiful and I took it slow. This is a pretty part of Italy even in winter with quite decent country roads which curve around an undulating landscape that is mostly cultivated but part wild (witness last nights boar!) and the tops of many hills are crowned with spectacular stone castles, churches and monasteries.

Montalcino clings to one of the larger hills in the Val d’Orcia National Park. The town is surrounded by walls and topped by a fortress known as the Rocca. Most tourists at this time of the year are concerned only to visit Tuscany’s cities (Florence, Pisa, Siena, etc) and parking in the centre of Montalcino was easy. I left the Van in the car park alongside the Rocca and went to explore the fortress. 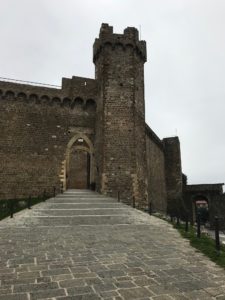 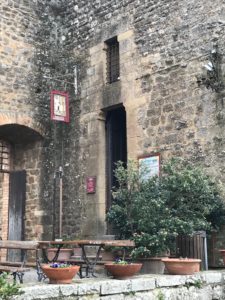 … an Enoteca – the Fortress Wineshop. Result!! 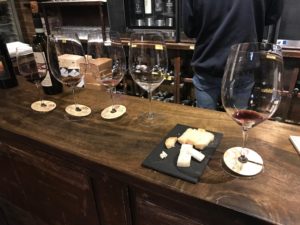 I was soon deep into a wine tasting session and enjoyed sampling a variety of Brunello which are made using only the Sangiovese grape and are aged for a minimum 5 years (2 of which must be in oak barrels). The really good vintages improve with age and are left for between 10 and 20 years before drinking 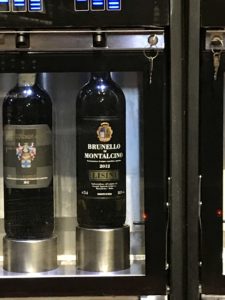 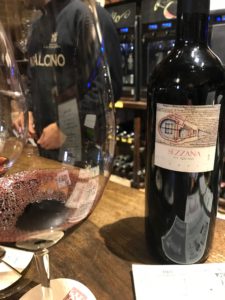 My favourites were a 2011 Banfi and a 2012 Lisini (both still young but smooth) and, best of all, a 2001 Sezzana. I bought some 2012 Banfi which Wine Spectator rates as “an outstanding vintage” and “a textbook Brunello that will be at it’s best between 2020 and 2033”.  Looking forward to tasting them.

After the wine tasting it was time to explore Montalcino and get some fresh air and exercise before heading off to San Quirico d’Orcia. One point worth noting about this fortress however is that a Jazz & Wine Festival is held here every July. Now that would be great. 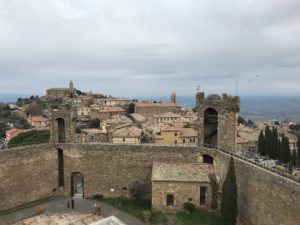 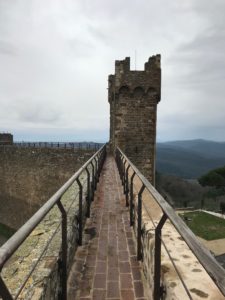 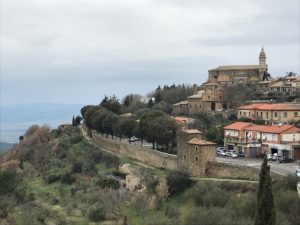 … the views inside and outside of the Rocca were fine (it cost 4 euros to walk the fortress) but, although the rain held off, it was very cold

The main street from the fortress into the predominantly pedestrianised town centre contained many more Enoteca but I resisted the urge. 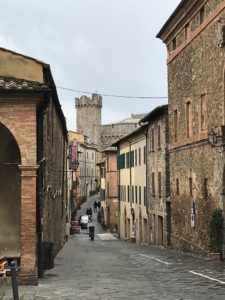 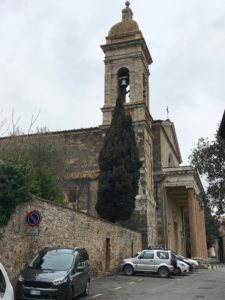 … the main street from the fortress into the town led to the Cathedral di San Salvatore. 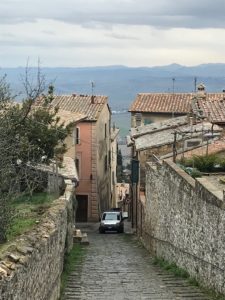 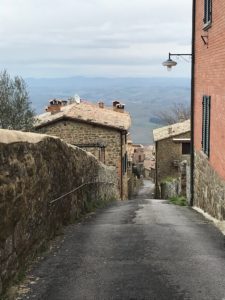 … the above photos show how steep some of Montalcino’s lanes are. The town quite literally clings to the side of the hill 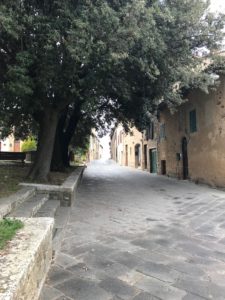 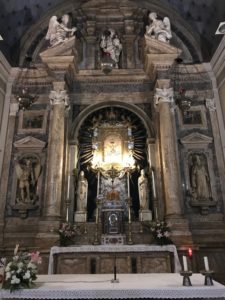 … carrying on along the town’s principal lane, past the cathedral, is the Church of the Madonna del Soccorso. The outside was being renovated and covered in scaffolding but the inside of the church was special

It was gone lunchtime as I left Montalcino. I hadn’t intended staying quite so long but I figured it wouldn’t take much more than 20 minutes to drive to San Quirico d’Orcia and that proved to be the case.

SQ’O straddles the Via Francigena (a primary route in the Middle Ages for pilgrims travelling the 1,100 miles from Canterbury to Rome) but it is not as well known nor is it as frequently visited as Montalcino, Pienza, Montepulciano and many other small towns in the area. It was recommended to me as a place to visit by someone from Tuscany and right he was.

The town is named after San Quirico (St Cyricus, St Cyriac or St Cyr to you and me) and the principal church is the Collegiate of the Saints Quirico and (his mother) Julitta. Most of the legends surrounding the martyrdom of the Saints Cyriac and Julitta are particularly bloodthirsty and not for repeating in this (when it suits me, family orientated) blog. However, there is one account (the English version as recorded in prints held at St Cyriac’s Church, Leacock, Wiltshire) that I don’t mind repeating because by any standards it is patently absurd. This English version claims that in 304 AD, at the height of Diocletian’s reign over the Roman Empire, St Cyriac and his mother were martyred as a result of the 3 year old St Cyriac having boxed the ears of the Roman Governor of Tarsus because he blasphemed. Only the English. 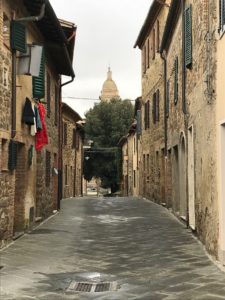 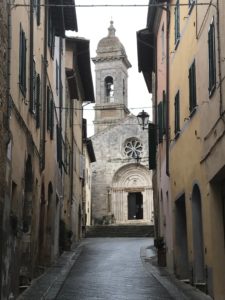 … lots of lived in lanes (see the washing hanging out on the left); this one leads to the Collegiate of the Saints Quirico and Julitta

Another splendid looking church in San Quirico d’Orcia is the Chiesa di San Francesco on the main square (the Piazza della Liberta) but, my favourite is the little Church of Santa Maria Assunta: 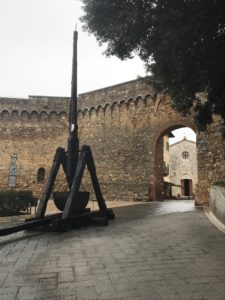 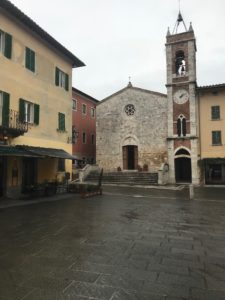 … the gate into the Piazza della Liberta and the Chiesa di San Francesco. The wooden structure in front of the gate looks like an Onager (siege engine) but there was nothing around to explain its relevance to the town 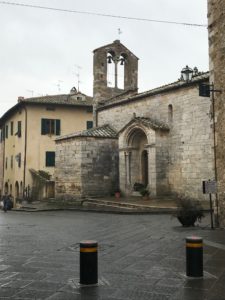 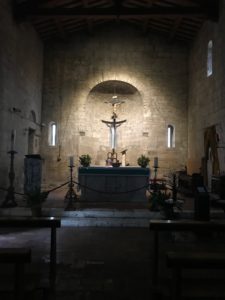 … and the small but exquisite Church of Santa Maria Assunta

Despite being perched on a hilltop (where else?) the wholly pedestrianised town centre is mostly flat and provides for easy walking through some lovely lanes where I discovered at least two boutique hotels, some fine looking restaurants and even a Birrificio Artigianale (an artisan brewery) – the place is worth another trip to properly experience the food and drink alone. Everything about the town is so very clean and tidy (unlike so many other places in Italy which country must rank amongst the most dirty and litter infested I have seen on this tour) and the local people are so very welcoming. 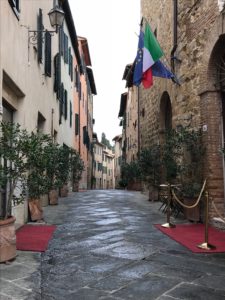 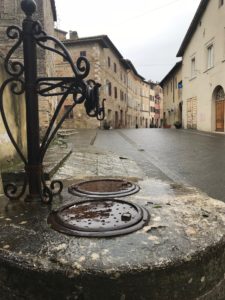 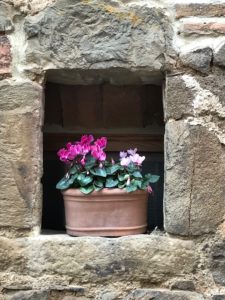 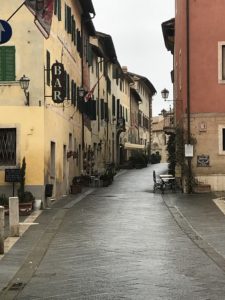 One final surprise in SQ’O, I stumbled across a bronze statue of Tazio Nuvolare, otherwise known as the Flying Mantuan and the most famous racing driver of his time, who in 1930 and 1933 won the Mille Miglia (a thousand mile motor endurance race between Brescia and Rome and back). It seems the route of the race took it through SQ’O: 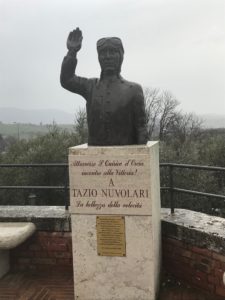 … the Flying Mantuan, winner of the Mille Miglia in 1930 and 1933. The last Mille Miglia was run in in 1957 with Stirling Moss and his co-driver Denis Jenkinson winning it in 1955

Seems a good note to end this blog on. From San Quirico d’Orcia I raced eastwards towards Pienze, arriving just in time to experience the heaviest rain since I crossed the Albanian border into Greece. I hung about for an hour or so to see if the rain would stop and then called it a day and returned to Casciano di Murlo.