Just arrived at a very comfortable campsite at Stobrek, near the City of Split. There’s a hoolie blowing (the Bora, again) and I’m staying in the Van this evening with a bottle of wine and some chicken fajitas. Split will wait until the morning.

I’ve travelled just 80 km today. I could have driven it within an hour or so but chose to make a day of it travelling along the coast road, stopping at Primosten  and Trogir. I didn’t stay long in Primosten (just long enough for a coffee and to catch up on the UK news) but I was a fair while in Trogir and even then I had to tear myself away. Small wonder it has been designated a UNESCO World Heritage site.

The town itself is tiny. It is on an island about 500m by 250m and linked by bridges to the mainland and a larger island, Ciovo. 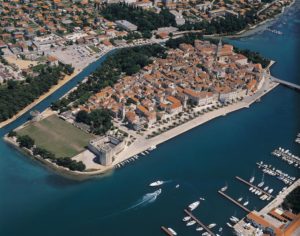 Trogir with the mainland in the top left and Ciovo in the bottom right of the photo. The football pitch on the left of the island by the castle is HNK Trogir FC -their home ground truly is a fortress 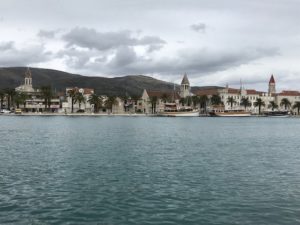 Much of the town is surrounded by medieval walls and, inside those walls, there is a small castle and a relatively high concentration of churches and palaces set among even narrower streets than was seen in Krk. Pretty as Trogir is, regular readers of this blog will understand my wanting to get back on the road to Split before dark.

One of the old gates into the towns and a couple of the alleys. The stone is mostly marble.

Principal among the buildings in Trogir is the Katedrale Sv Lovre (Cathedral of St Lawrence). It was built in the 13th century on the site of an older Christian church that had been sacked and demolished by Saracen invaders. For a 15 Kuna contribution to church funds (about 2 euros) I was allowed to go to the top of the 47 metre bell tower for some fine views over the town. I made it up and down the tower before the bells started peeling. LoL. 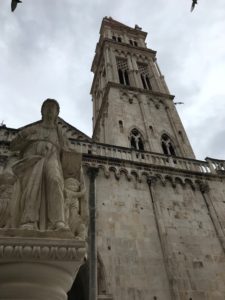 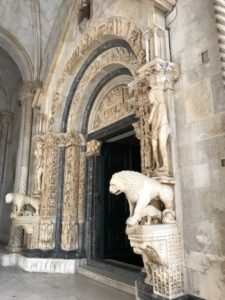 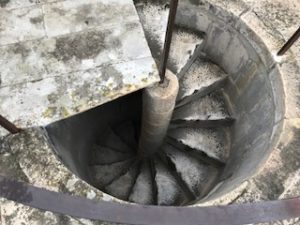 The ascent up the bell tower is a little narrow to start with (room for only one at a time but, once again, I had the place to myself)…

… but it opens out

I’ll leave you with a few other photos… 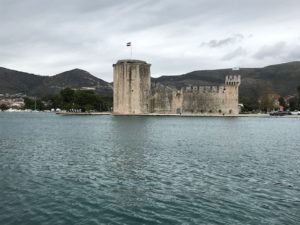 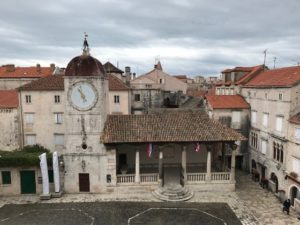 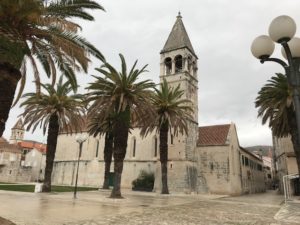 Not sure of the name of that church. There were a few and I became confused

Time to open some wine and get on with my fajitas.