Moving to the Region’s largest town, Split, tomorrow so today was always going to be a lazy day checking out a few more of the local sites. It started with a brief stop at Skradin, just a few kilometres down the road, to  top up with supplies (milk, bread, eggs and the local cheese, ham & olives – olives can be a bit hit or miss with me but that’s not been the case in Slovenia and Croatia; not when they are so fresh) and then on to the Krka National Park to find a nice spot for breakfast. I don’t think I did too badly… 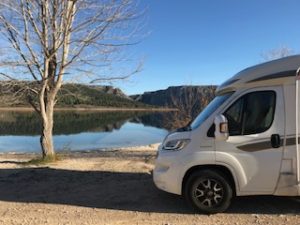 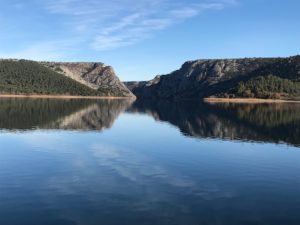 There’s the Van parked up for breakfast and there’s the view I had to suffer while sitting in the Van drinking coffee and enjoying a rather good omelette (‘though I say it myself); I’ll have the olives later.

Further down from where I was parked is Visovac Island on which sits the Franciscan Monastery of Our Lady of Mercy.  Apparently it has sat there since 1445 but from where I was sitting you couldn’t see it for trees and I didn’t therefore bother with a photo. There’s another reason for not including a photo – I am told the monastery houses “a valuable collection of historical church linens and dishes” – At this moment I don’t need reminding of the chores that await me before I split for Split tomorrow. For those of you who think this is one long holiday; it most certainly isn’t! It is more a succession of Saturdays and things still need to be done.

In hindsight (that word again), I think I made a mistake travelling up the western side of the Krka River. Yes, I found a nice secluded spot to have breakfast but I was on the wrong side to approach the Roski Slap (another apparently nice set of waterfalls known locally as “The Necklace”). Well, if you ever visit this place and it is worth it you will be better informed than me. 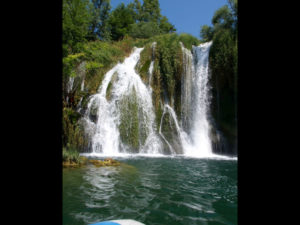 It’s not my photo, but that’s the Roski Slap. Zoran tells me that, good as the falls are, it is more about the walk in along an 8 km trail from another place in the Park worth visiting called the Ozidana Cave. It is reputedly one of the best walks in the country

Giving up on the Roski Slap (this time) I spent the rest of the day exploring Sibenik and Skradin but, believe it or not, the best views of both places was from the Odmoriste (Service Station) next to the Skradin Bridge on the motorway to Split (a service station well worth stopping and that beats Watford Gap for views by a country mile)… 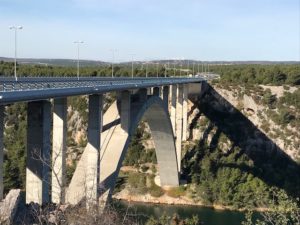 First photo is of the Skradin Bridge from Skradin and the second is of the same bridge from the Motorway Service Station (by the way, they don’t sell petrol at this particular Odmoriste) 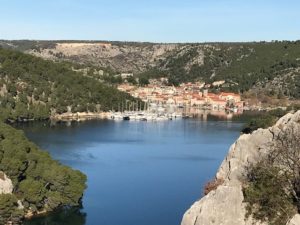 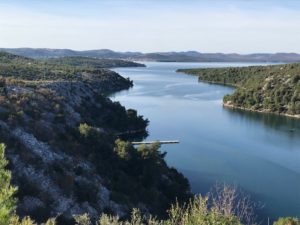 Two more photos taken from the Service Station, the first being a photo east to Skradin, the second being the view west towards Sibernik

Well. That’s all for now. The sweeter red wine here isn’t too bad when taken in quantity.