It is another sunny,  warm day in the Friuli Venezia Giulia Region of Italy and I elected to stay for another 24 hours.

This morning I got another early start and walked the 6 km to the city centre (it was all downhill) and then spent a few hours taking in the more obvious sites. Trieste is totally different to what I expected. Except for the crazy Italian driving style that seems to require speeding down narrow streets with one hand clenched fist-like out of the window and the other glued to the car horn  (don’t ask me how they steer – judging by the scratches down the sides of most cars I suspect it is bit like the luge in the Winter Olympics) Trieste doesn’t seem all that Italian. The buildings, monuments and abundance of coffee shops are more reminiscent of a “Vienna by the Sea”; which is not so implausible given that for a long time Trieste was part of the Austro-Hungarian Empire (that’ll be the Hapsburgs again).

My route into Trieste brought me in by the Grand Canal which is not a canal in the conventional sense but a small waterway that allowed cargo ships easier access into the city in days of yore. It is pretty notwithstanding the renovations currently taking place and it enabled me to quickly find my bearings. 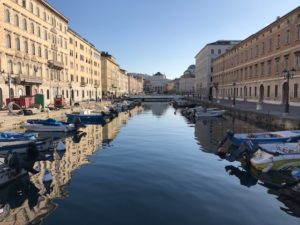 From the Canal, it is a very short walk down to the Molo Audace which is a large stone paved promenade (a bit like a flat pier without any arcade or amusements) that stretches 300 metres out to sea such that the locals and people like me can get a good view back towards the city. Unfortunately, I arrived at the end of the Molo as the sun came over the rooftops and while the view was tremendous my photos weren’t. From the Molo it is only a hundred metres or so to the Piazza dell’ Unita Italia which is, I read, “the largest square situated next to the sea in Europe”. Whatever, it is impressive with it’s six white palaces that now serve a considerably more mundane function.

I’m beginning to sound too much like a tour guide so, I will desist and leave you with a few photos but, I should tell you before I go that I have purchased a bus ticket (1.25 euros) to get me back to the Van. I couldn’t hack going up that bloody hill again so soon after yesterday. 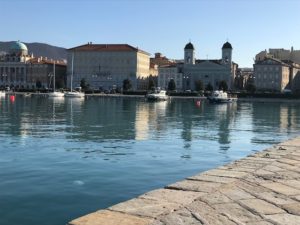 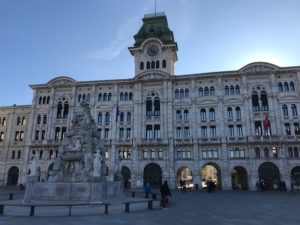 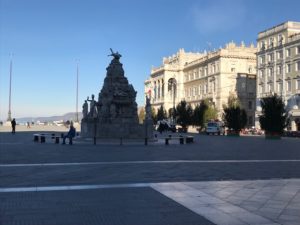 A couple of the palaces on the Piazza dell Unita d’Italia (the first is now the Town Hall). Both photos include the Fountain of the Four Continents – There were only four recognised continents at the time the fountain was crafted (about 1800) 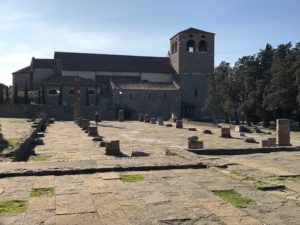 Some photos of the Cathedral of Saint Giusto (Saint Justus); this is up by the Garden of Remembrance and despite it’s city centre location it was very quiet and peaceful up there (and look at the weather). The dome above the main altar is stunning. 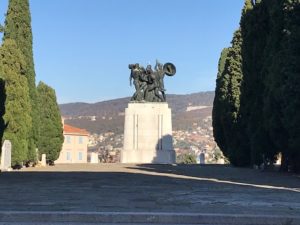 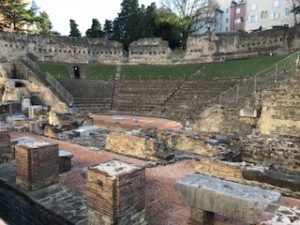 (a) Monument in the Garden of Remembrance & (b) remains of the Roman Amphitheatre built at the behest of the Emperor Traiano.

One place I didn’t get to see despite it being just 2 km from where the Van has been parked the last days is the Grotta Gigante but after the Postojnska Caves in Slovenia, no matter. There was also of course the town of Prosecco where the grape and wine originate but some other time perhaps.