A relatively early start and I had finished the eight mile hike to Castelo di Miramare by 10am, at least an hour before the first coach disgorged it’s hordes. I had the castle and grounds almost to myself and what a nice place too.

Completed in 1860 by the Archduke Maximilian of Hapsburg (younger brother to Franz Joseph mentioned in my Vienna blog) as a love nest for himsef and his young bride, Charlotte of Belgium, this very pretty castle (I’m not altogether convinced the word ‘castle’ suits this type of building – it’s more of a little palace) sits right on the coast almost equidistant from Trieste and Prosecco (where the wine of the same name is produced) and its 22 hectares of subtropical trees, sculptures and fountains seem almost to match those at Versailles.

The castle is pretty but rumour has it, it is cursed – it is said that anyone who lives there will die a premature violent death in a foreign land. That is certainly true of the Archduke Maximilian. Within a relatively short period of leaving the castle to accept the throne of Mexico (as Emperor Maximilian I), he was overthrown and executed by the Juaristas at the age of just 34. Subsequently, the Archduke Ferdinand was assassinated in Sarajevo after visiting the castle and; the Duke Amadeo d’Aosta (who lived there after the Hapsburgs gave up the property) died a prisoner of the English in Kenya during WW2 and; the German General Friedrich Rainer who lived in the castle during WW2 was shot dead by partisans. I am sceptical of such things but the American General stationed there after WW2 thought differently because he chose to live in a tent in the castle grounds. As for Maximilian’s young wife, Charlotte, her husband’s execution brought on a complete emotional collapse and she was consequently certified insane and lived out the rest of her days first in Miramare and then back in Belgium. Bit of a sad place perhaps but you would not think that to look at it.

Once I reached the coast road (it was a seriously steep trek down from the Van) the walk to Miramare was along a fine promenade that stretches all the way from Trieste to Miramare and beyond. 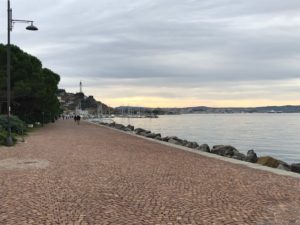 The promenade stretching back to Trieste… 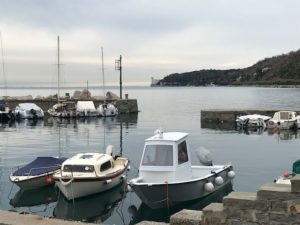 … and on to Miramare. That’s the castle on the promontory in the background 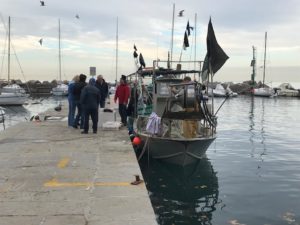 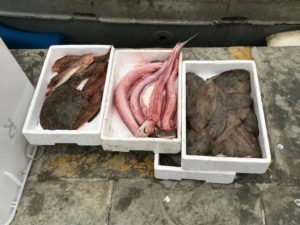 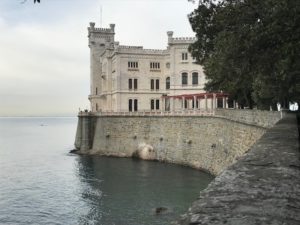 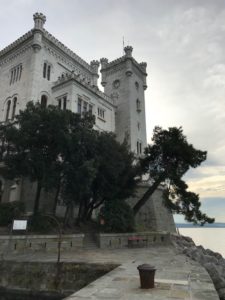 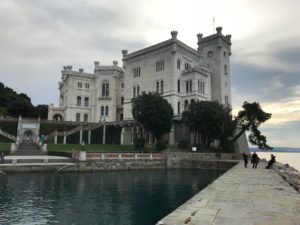 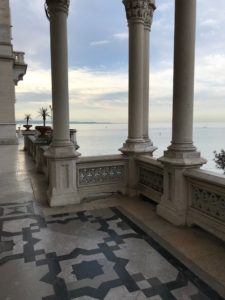 Pretty “Castle” (I really like the last photo of the four) 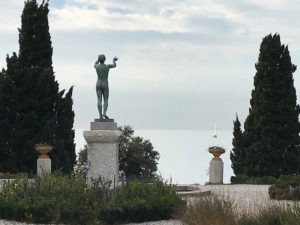 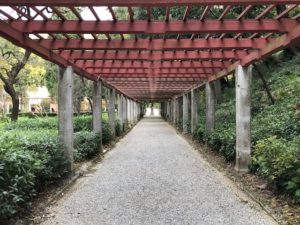 It was getting warm on the way back and I chose to walk under the trees which protect much of the promenade and, of course, going back up those steep hills to the Van I just had to stop at a local restaurant for a glass of wine or four… 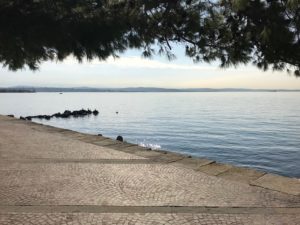 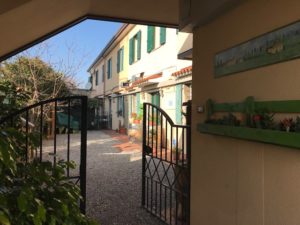 Well, there’s no driving today (or tomorrow at this rate).

By the way, in case you didn’t see my Facebook Post last night, yesterday’s dinner at my local bar was seriously good. 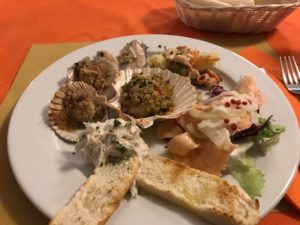 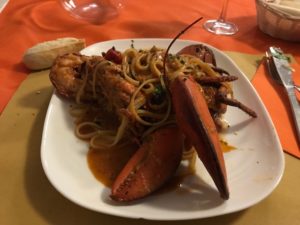 The fish starter on the left was complementary. The pizza I had intended as a main course was changed for lobster. The red wine was 1 euro per large glass