A good day that would probably have been a great day except for a slight miscalculation on my part.

It started well. I was on the road by 8.30 am and covered the 30 km to Sivota within about 45 minutes. Sivota is a small seaside town with a pretty harbour, crystal clear water, a surprising number of cafes that are open notwithstanding that it is well out of season and free wifi anywhere in the town. A cup of coffee, a quick tour of the town and to buy some supplies and then I was off up a hill at the back of the town seeking the long abandoned traditional stone village known as the Vrachona Settlement. That is where the miscalculation occurred. I walked 10 km up, down and around a much bigger and wholly incorrect hill and never found the Settlement. Wally! 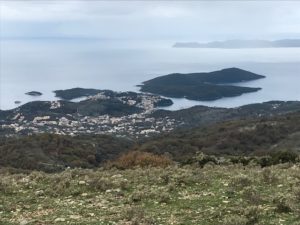 Looking down on Sivota but not from the Vrachona Settlement. Well I got my exercise today and a photo opportunity that would have otherwise been denied me

The next stop was the smaller coastal town of Parga. I hadn’t been too sure about going to Parga but it wasn’t going to be too much of a detour. So glad I did. It’s a beautiful town with, for so small a place, a surprising number of interesting features.  In particular, there’s the local church on the island in front of the harbour and a Venetian Castle on a rock overlooking the town.

Ali Pasha (the same Ali Pasha who has figured in so many of these blogs) bought the town from the British in 1819. Greece regained it in 1913 but by then many of the Greek inhabitants were long gone, fleeing to Corfu. Don’t ask me what we were doing with it. I would have visited the Venetian Castle (if only because there would be fantastic photo opportunities from the battlements) but I was running well late because of a certain hill outside of Sivota (not to mention my pig headedness in thinking the Settlement must surely be over the next rise) and I wanted to reach Acheron Springs before nightfall. 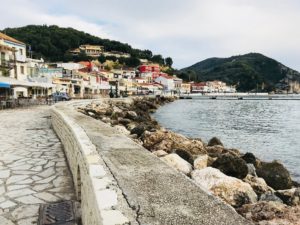 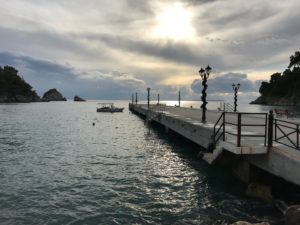 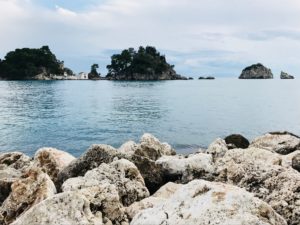 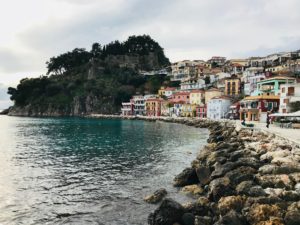 I must have taken dozens of photos in Parga

As I drove inland to the Acheron Springs the weather deteriorated but upon arrival I couldn’t have received a better welcome:- 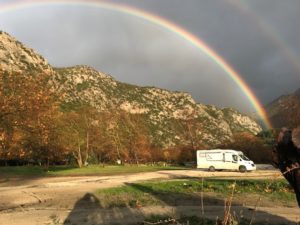 That’s the Van and both ends of the Rainbow were visible from where I stood. The end you see appeared to originate at the entrance to the gorge where the Springs are

In case you didn’t know (and apologies if you did), Greek mythology tells us that Hermes and Charon would guide the souls of the dead down the Acheron River to Lake Acherousia and the underworld, Hades. I stayed parked at the Acheron Springs overnight reflecting as to whether it was Hermes himself who had organised the Rainbow for me. Some welcome. I just hope he wasn’t intending I stay longer.

On to Ammoudia in the morning (where the Acheron empties into the sea).