While the weather was really nice today (how it can change so significantly from yesterday, I do not know), the forecast for Shkoder over the next 7 days is terrible. I therefore decided to spend this morning touring the city and revisiting the Rozafa Fortress (so as to get at least one decent photo) and then, in the afternoon, move south to Durres or even beyond where the weather forecast is considerably better.

Shkoder is a place of total contrasts. It is one of very few places in Albania with a track record of resisting communism and it’s not therefore surprising to see it has a cathedral and a number of mosques while the rest of Albania seems to have toed the party line and done away with religious buildings of any kind and; there seem to be considerably fewer of Enver Hoxha’s military bunkers in Shkoder than anywhere else in the country (Hoxha was paranoid about the West invading Albania and instructed that individual pill boxes be constructed for each and every Albanian capable of carrying arms) but; the contrasts don’t stop there. It is a real mix of ancient stone wall buildings alongside distinctive modern buildings such as the Marubi National Museum of Photography or even the city’s Grand Hotel (although, if I am honest, the ugly drab housing blocks one associates with Eastern Europe do predominate). There is clearly much poverty, with so many people standing on the streets all day trying to sell clothes that they have grown out of, and yet all the usual designer brands are on sale in shops.  Donkeys, goats, turkeys and so many stray dogs wander the same streets as are filled with expensive cars (the great majority of private cars on the roads, and almost all the taxis it seems, are Mercedes, Audi or BMW). I’m not altogether comfortable with that. It reminds me of Bangladesh and India. 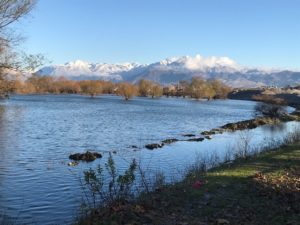 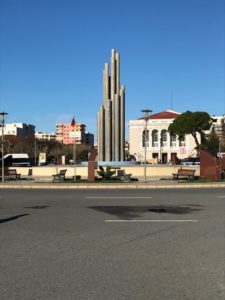 I said the weather was good today and that is perhaps reflected in a few of the photos I took both of Shkoder and during my return to the Rozafa Fortress:- 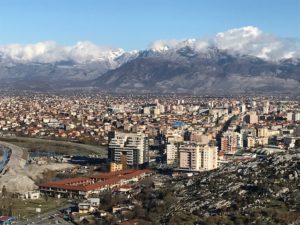 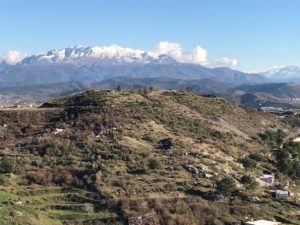 Going back up to the Fortress in altogether nicer weather. The second photo is of Shkoder. I must also include at least one window shot

Moving on. I decided to chase the good weather and head for Durres but I think the sat-nav was playing up once again because when I entered Durres it kept directing me towards the ferry terminal and insisting that I take a ferry. After driving several kilometres in circles around Durres and repeatedly ending back at the ferry terminal I gave up on the place, turned the sat-nav off and followed the road signs further south to Vlore. What a journey that was but before I continue, lest there be any doubt, let me state categorically that the roads in Albania are the worst I have come across outside of Africa.

At the time I didn’t understand why the sat-nav should keep directing me towards the ferry terminal but now I think it was perhaps some form of divine intervention. It took me so long to reach Vlore and even then I didn’t have time to find a decent wild camp (I’ve literally just pulled up off the motorway) but, take a look at the quality of the road I had to follow for miles and miles:- 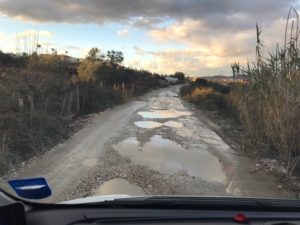 That, believe it or not, is an “A” road and that was one of the better parts where I could take a hand off the wheel to take a photo. I could have done with 4 wheel drive today (or perhaps I should have taken the ferry)

Anyway, I am in or close to Vlore. I’ll see what that is about tomorrow.