I took my time driving to Nafplio, going via Sparta and Tripoli, and upon arrival made my way to the huge harbour car park which; in Winter at least, you can overnight in and is free. Soon after arrival I could put hand on heart and say that I really like Nafplio.

I started off by walking up the 216 metre rock staircase from Napflio Old Town to the Palamidi Castle. Not another fortress I hear some of you say! Ah, but this one is special and not just for the panoramic views although the trek is worth it for them alone. You can get a bus or taxi up a road at the back of the castle but my chosen route was the rock staircase which starts from the Old Town and which they say comprises 999 steps. I don’t think there are that many steps but it is a moot point since you will take far more if you properly explore the place.

There are three fortresses in Nafplio; the first being the Akronafplia, some parts of which date back to the Bronze Age and around which sits the Old Town; the second being the 15th century Bourtzi Fortress in the Bay itself (remember the Bourtzi at Methoni?) and; the third being the particularly impressive Palamidi which was built by the Venetians between 1686 and 1714 and dominates the City. 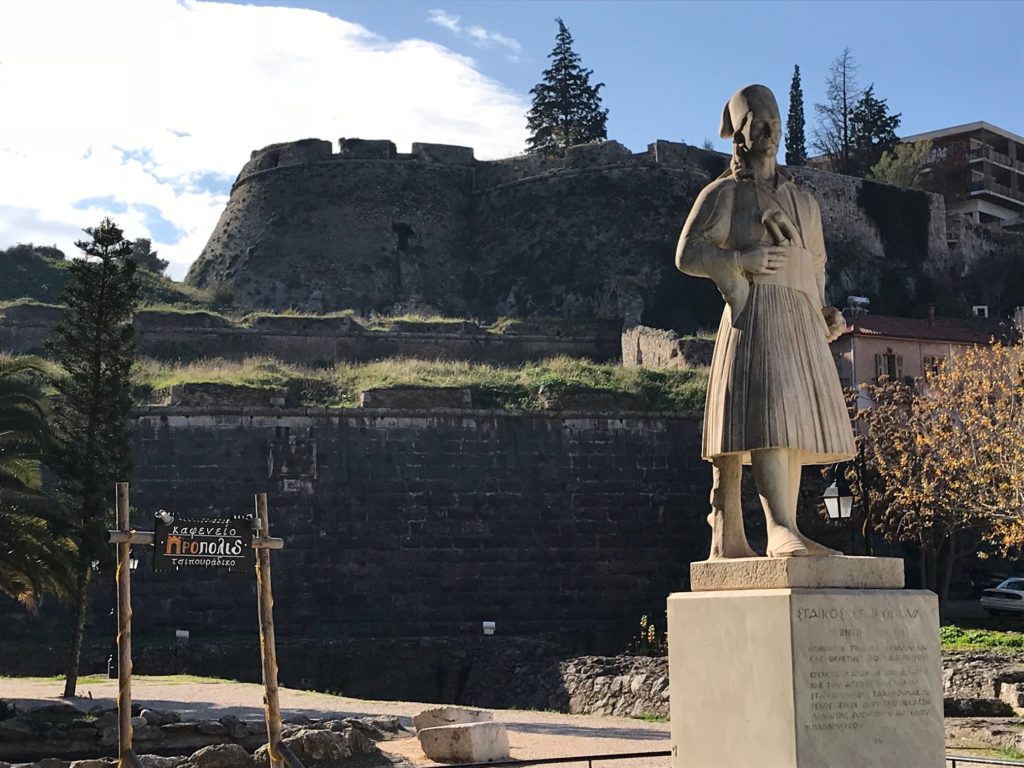 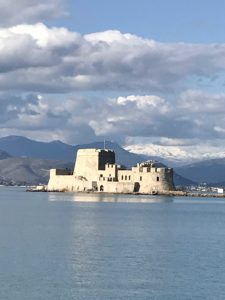 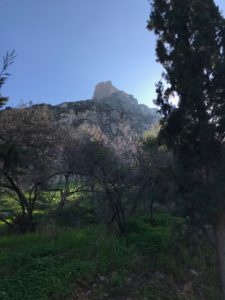 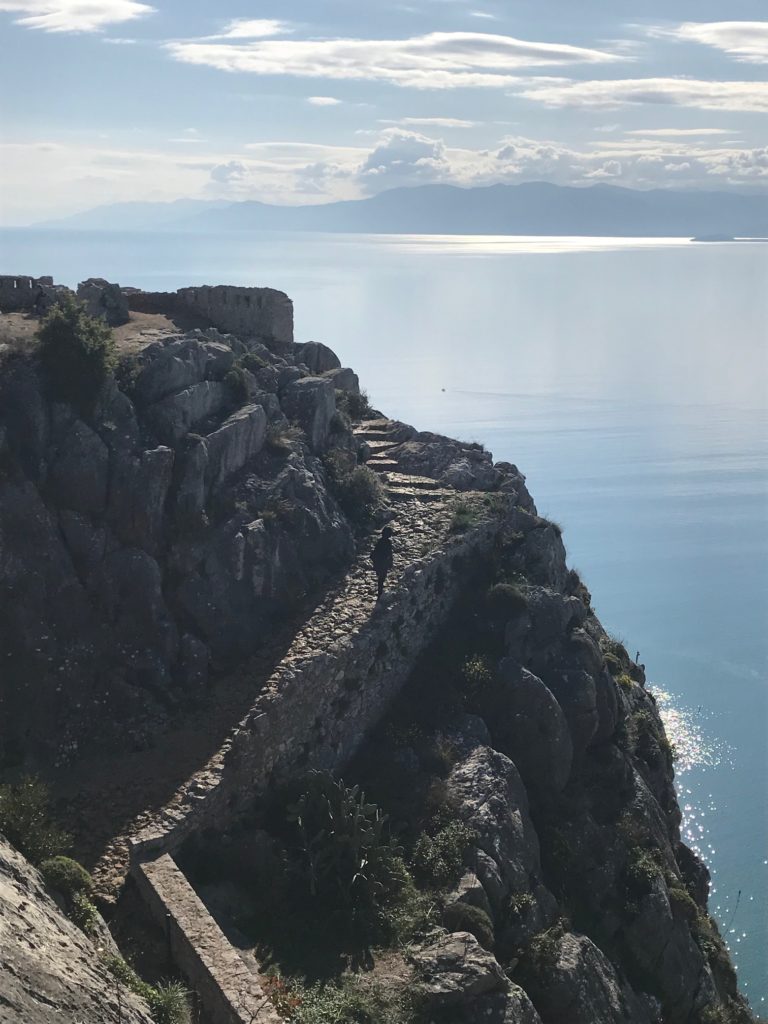 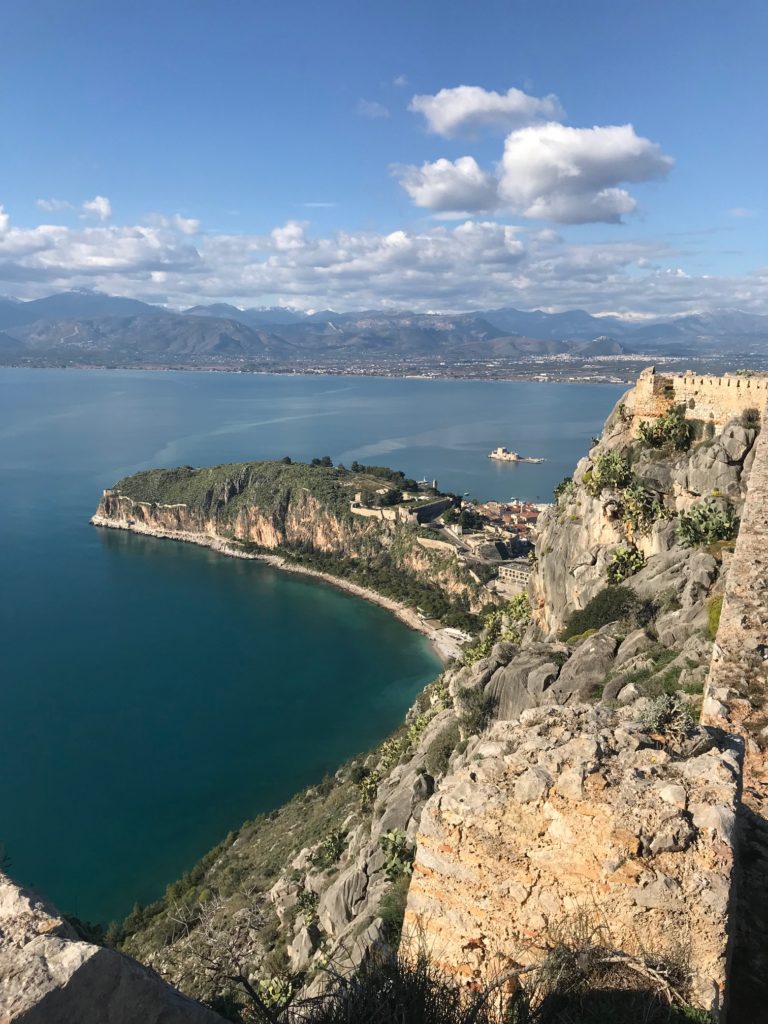 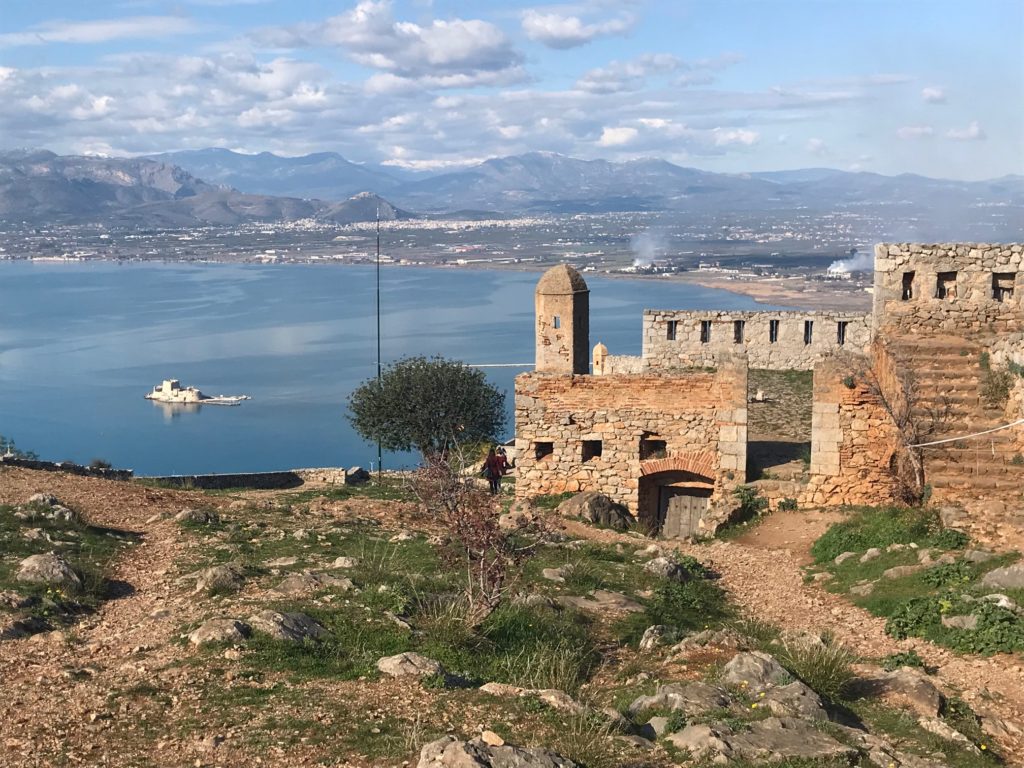 The above photos were taken from inside the castle. It is not very clear in my photos but you can just make out the Bourtzi in the Bay

The castle is in fine condition compared to others seen during this tour but it has had it’s share of incidents. The Venetians lost it to the Turks within a year or so of it being completed and it remained a part of the Ottoman Empire until a certain Theodoros Kolokotronis helped win it for the Greeks during their war for independence. Theodoros was a Kleft (i.e. a warrior bandit) who fled to Zakynthos after the Turks started hunting them down. In Zakynthos he rose to the rank of Major in the 1st Regiment of Greek Light Infantry (which had been formed by the British to fight Napoleon Bonaparte’s Turkish allies) and this experience led to him being appointed General in Chief of the Greek forces in the War of Independence against the Turks. Theodoros was in overall command of the irregular forces led by Staikos Staikopoulos who took Palamidi Castle from the Turks in December 1822 and he facilitated Staikos’ victory by defeating the Turkish army that was marching to relieve Nafplio at the Battle of Dervenakia (August 1822). Given the above, it is ironic that Theodoros should subsequently have been charged with High Treason and held prisoner in Palamidi (1833). He was exonerated.

Returning down the staircase it was time to explore some other aspects of the City, starting with the Old Town. There has been a settlement here since antiquity and before. Soldiers from the town were said to have joined Jason and the Argonauts in search of the Golden Fleece and, certainly, later soldiers served in the Trojan War.

More recently, in 1829, shortly after the War for Independence had been won Napflio was made the official capital city of Greece by the first Head of State, Count Ioannis Kapodistrias. Within two years the Count was assassinated in his capital city on the steps of the church of St Spyridon and, in 1834, a successor made Athens the capital.  For the avoidance of doubt, there is no evidence to suggest this assassination was driven by any desire to move the capital and certainly no Athenians were implicated in the assassination. It was all down to the Mavromichalis family who hailed from the Mani Peninsula 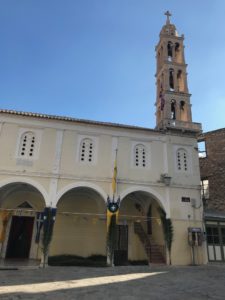 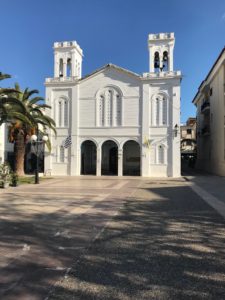 Two churches in the Old Town; St Spyridon (where Count Ioannis Kapodistrias was assassinated) and St Nicholas (the protector of sailors)

The Old Town is delightful – narrow cobblestone alleys packed with interesting churches, curiosity shops and an abundance of cafes. I stopped twice for refreshments; the first time was for a cold drink and to people watch on Syntagma Square in the heart of the Old Town and; the second was for a hot coffee and to gaze out over the Bay after enjoying a short walk along the Arvanita Promenade which stretches from the Harbour and around the Akronafplia Rock. 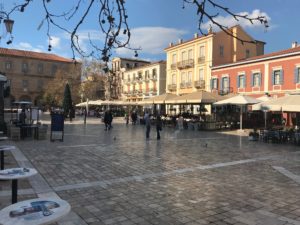 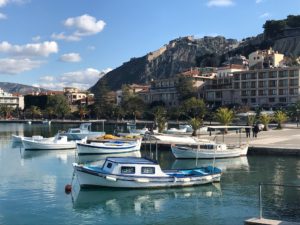 The Harbour, resplendent with date trees (it’s been over a year since I last ate fresh dates) and, below, a section of the Arvanitia Promenade (not obvious from this photo but small forests of prickly pear abound) 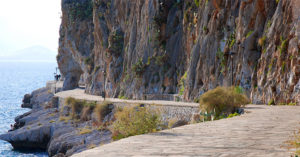