After leaving Stoupa I undertook a short drive across the Mani Peninsula and parked on a beach near Gythia simply to enjoy the sunshine and plan my next move. The place I stopped wasn’t one of the most spectacular beaches I have discovered in Greece but it was clean and quiet and I had it to myself. I stayed day and night (catching up on some much needed rest) and decided Monemvassia and then Nafplio would be my next destinations.

It was an early start the next morning and I saved on washing up by pausing in Gytheio to take breakfast – proper coffee with freshly baked croissants and pastries, especially baklava (very sticky  layers of filo pastry stuffed with chopped nuts and honey). There’s not much to Gytheio but I like the place and I particularly like their baklava. 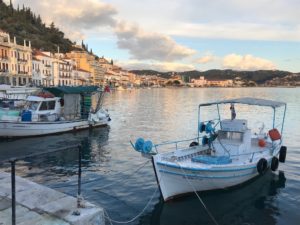 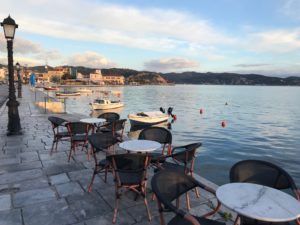 Gytheio by the harbour. There are worse places to take breakfast but… 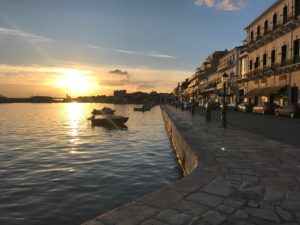 I arrived at Monemvassia late morning and found the perfect parking spot on the southern quay right by the causeway across to Monemvassia Island. 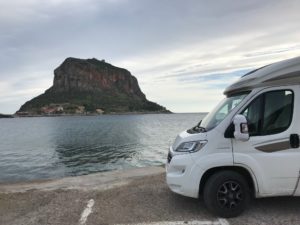 Not a bad parking spot – uninterrupted views across to Momenvassia (Shut the door! Sorry, that’s a private joke)

Monemvassia was founded in the 6th century as part of the Byzantine Empire.  It derives it’s name from “moni emvasi” meaning “single entrance” which relates to the narrow strip of land or causeway (previously a bridge) which connects the island fortress town to the mainland. It comprises an Upper and Lower Town linked by a fortified winding path. The Upper Town is built on a sloping plateau at the top of the rock and covers about 30 acres. Originally, the Upper Town was the island’s administrative and military centre but when the Turks took over it was reserved for the ruling classes.

After crossing the causeway, I tried scrambling up the nearside of the rock to the summit. Although there was some exposure, to start with it wasn’t too difficult. The island is predominantly lava rock which provides great grip but, it was impossible to see it from below, old castle walls stretch almost the entire south side of the rock and for me they were impassable. It was time to go back and try a more conventional route. No matter, I had some fun and took some good video of the climb which I will try and post once I get to grips with the video widget (and cover some of the expletives I may have used).

I retraced my steps, contoured eastwards around the hill and stumbled across the Eastern Gate above the lower town. From there it was a simple walk to the upper town. 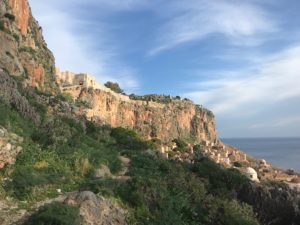 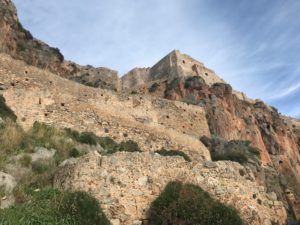 Contouring around the hill I stumbled upon the Lower Town, just below me. Thereafter, it was an easy walk to the Upper Town 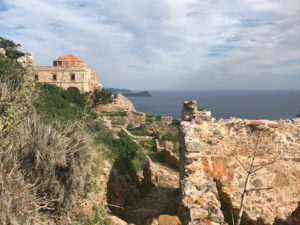 Most of the Upper Town has long been destroyed. The exception is the Church of the Hagia Sophia (built in the 12th century, converted during Turkish rule into a mosque but returned to the Christian faith in 1821) which was restored inside and out in 1958 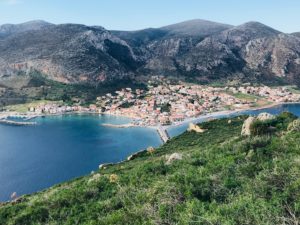 In Winter at least it is an easy and quick walk down the narrow winding lanes from the Upper Town to the restaurants, taverns and souvenir shops that fill the Lower Town. It was warm and sunny and after a quick tour of the Lower Town I resolved to pause and enjoy a meal before returning to the Van and my prime spot on the quay.

A local Rose Wine and Dolmades. Wine was fine. Nothing wrong with Dolmades either, except the vine leaves tasted like soggy cabbage. Ugh!! I loathe brassicas 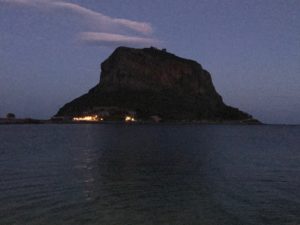 Nice warm evening. This area is nowhere near as cold and wet as the West. I bought some tonic waters earlier today. Where’s the Gin?