Leaving Bari late in the day and determined to overnight in Gallipoli (some 40 km beyond Lecce on the coast), I didn’t allow myself anywhere near enough time to properly explore Lecce and the surrounding area. I overlooked some of the eastern side of the city and, more particularly, I failed to visit both the Cesine Nature Reserve (some 20 minutes drive to the east) and the seaside town of Otranto (further to the south). I’ll be back.

Commonly referred to as the Florence of the south, Lecce is a small city on the Salentine Peninsula (a sub-peninsula on the heel of Italy). The majority of the buildings in the city are made of the creamy white limestone that I mentioned in the Bari blog (and which I have since learned is known as Lecce Stone) and the place is quite beautiful. I imagine it looks stunning when lit up at night.

Parked up in the municipal car park close to Porta Napoli, I was soon on my way towards the Piazza del Duomo (the cathedral square) in the heart of the old city. 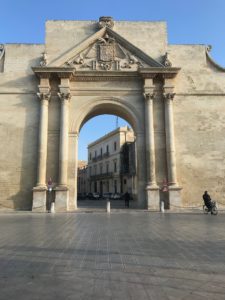 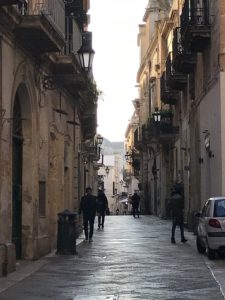 The first photo is of Porto Napoli, one of three remaining 16th century gates made in Lecce stone that lead into the old city. The second photo is of Via Palmieri, a principal route within the old city which leads from Porto Napoli to Piazza del Duomo.

It was early afternoon and, while I hadn’t seen that many people during my walk along the Via Palmieri, there was absolutely nobody about as I entered Piazza del Duomo. This is not unusual and it can be explained in part by the fact that the square only has one entrance (which made the area easier to fortify in the event the city was attacked) and consequently there is no through traffic, motorised or pedestrian. Hey, no complaints on my part. 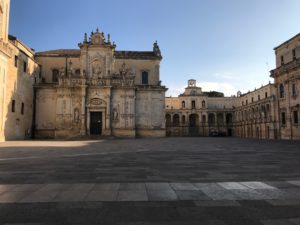 Above, the building on your left as you enter the square is the cathedral, the Cattedrale dell Assunzione della Virgine, and the one on the right (set further back) is the Archbishop’s Seminary Palace. 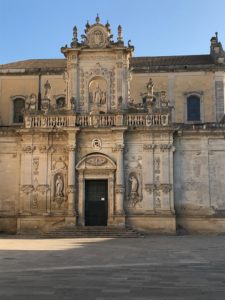 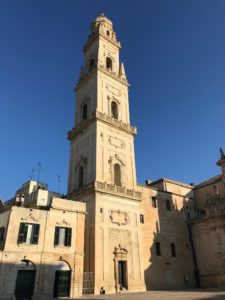 Unfortunately, the cathedral was closed. I therefore set off down increasingly narrower lanes towards another apparently more popular square (it has a McDonalds), the Piazza Sant’ Oronzo.

The centrepiece of the Piazza Sant’ Oronzo is his column but the square is great for people watching and surrounded by various interesting features (and I’m not talking about the McDonalds although I did sit and eat a Big Mac outside on the square): 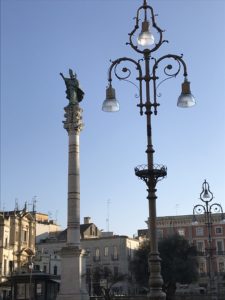 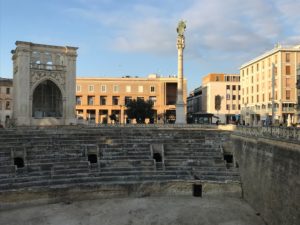 Then it all started to go awry, probably because I was in too much of a rush. I headed east towards the castle but, shades of Bari, visitors are not allowed up on the battlements. Somewhat disappointed I decided to give the castle a miss and, as in Bari, turned once again to the church.

The upshot of this is that instead of heading north from the castle towards the Basilica di Santa Croce, I headed south towards the Porta San Biagio and then spent a good half hour trawling increasingly narrow lanes in search of the wrong Chiesa di San Matteo. The Chiesa di San Matteo that I eventually found was somewhat disappointing (decorative as it was, it wasn’t that great) and too far from the Basilica di Santa Croce for me to turn around. Oh well. 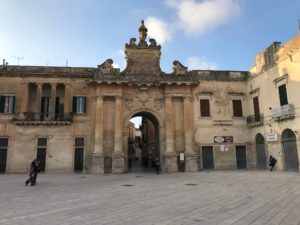 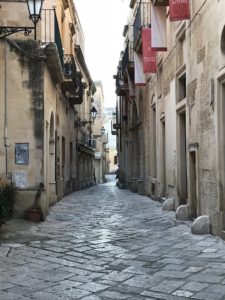 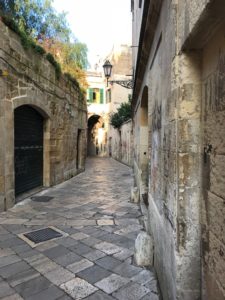 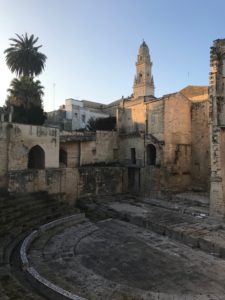 … and even more narrow lanes and… a Roman amphitheatre (which doesn’t show on my map) and… what on earth is the cathedral steeple doing there? It should be to the other side of me. 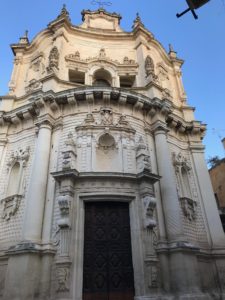 … and there it is, the wrong Chiesa di San Matteo. Whoops, I should have been looking for the Basilica di Santa Croce 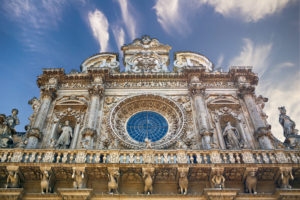 Above, someone else’s photo of the Basilica di Santa Croce in Lecce. Next time!

Still, it wasn’t a bad day. I made it to Gallipoli in good time and am now sitting drinking a reasonably well priced local wine with Prosciutto Crudo and Scamorza Cheese. Could be worse. 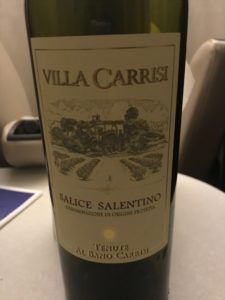