The Channel Tunnel crossing from Folkestone to Calais was a doddle (and very quick). I booked it online and simply followed the instructions in the confirmation letter from Euro-Tunnel and then the signposts in Folkestone. The rail crossing itself (if something going under the sea can be termed a crossing) was just 35 minutes but the whole journey from leaving Dave’s house in Canterbury to my parking place in the centre of Kortrijk in Belgium took less than 4 hours. 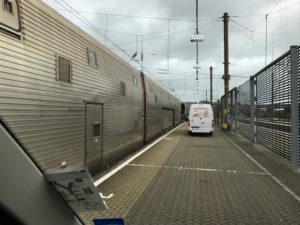 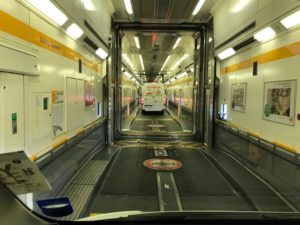 One observation I would make regarding the crossing is that the train rocked almost as much as any ferry I have travelled on – I didn’t have any Stugeron 25 to hand to combat motion sickness but the acupuncture learned on the Caribbean cruise earlier this year worked once again. Hurrah for alternative medicine (assuming always that acupuncture qualifies as alternative medicine)! 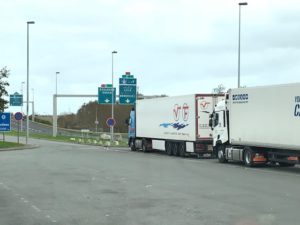 Not very exciting but the first photo in France!

Regarding the journey from Calais to my chosen destination of Kortrijk, it was straight forward. The downside was that I spent a good 1.5 hours listening and responding to a French language tape only to find that the Belgians in Kortrijk studiously avoid speaking French. They speak, read and write Flemish; English as a foreign language and; French only as a last resort. I should have realised this beforehand given that Kortrijk was previously known as Courtrai (at least by me). Oh well. 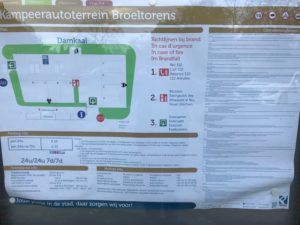 I know what to do in a fire but what about the rest of it?!?!

Time to go and explore Kortrijk.