Today is as much about deciding where to go next as anything (do I go deeper into Slovenia or cross the border into Croatia?) but I started the day off by walking down to Izola and then on, along the coast road, to Koper. Koper is some 9 to 10 km from where the Van is parked at the Belvedere and I figured I would be there for when the bars open. Decisions like this are best made over a glass of wine or a beer.

The coast road from Izola to Koper is no longer open to motor vehicles. It has been set aside for the use of cyclists and pedestrians only (a lane each) and they have even opened a new public toilet and showers along the road for road users. It was an easy walk but if I had known that the road never once deviates from the shore line (there is absolutely no ascent/descent) I would have been tempted to cycle there and back. Having said that, the bus service down here is frequent, regular and very, very cheap and I took the bus back.

The route, pedestrians on the left and cyclists on the right, with toilet and shower facilities – there’s considerate

Koper is a working port and a much bigger place than Izola, Piran or Portoroz  but the old part of the city with its old buildings and narrow lanes (it’s a real rabbit warren) has much character and a great many drinking houses. I found one, the Lord Byron, that does Guinness. If you wonder why I chose Guinness instead of a local wine (this was my third time of drinking Guinness since commencing the tour) it is because in France, Austria and now Slovenia they serve it far better than it is served back in the UK – they serve it at a temperature such that you can taste it and not ice bloody cold.

Talking of cold, as I passed through Izola there were two blokes taking a dip in the sea – Australians. It had to be didn’t it. 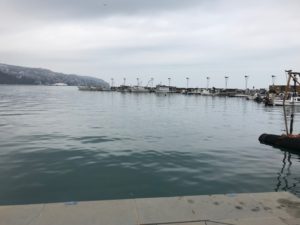 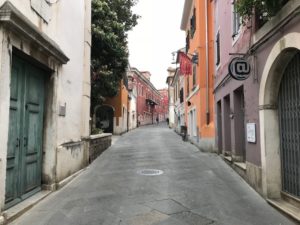 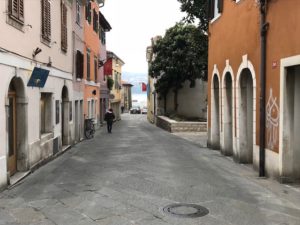 Yes, I’ve made my mind up. It’s Croatia next.

Today was about taking it easy and after an easy walk down by the cliffs to Izola and checking out the local sights (first impressions were correct – Izola is very much an old fishing town with shades of Venice) I made my way to the Manzioli Wine Bar on Manzioli Square (if a courtyard no more than 25 metres square can be termed a town square but, Izola is not very large). Manzioli was recommended to me yesterday by a local as the place to go to try out the local wines. 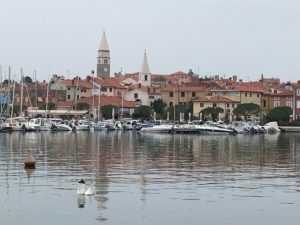 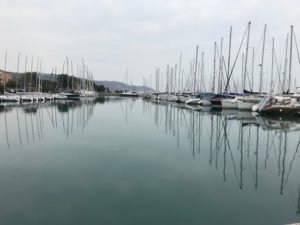 Azola is very much about fishing but its marina is also home to countless yachts; owned I dare say by relatively rich Italians who cross the border in droves to take advantage of the Slovenian casinos (which are everywhere, even at motorway service stations)

The town is made up of narrow lanes; not the picture post card lanes of Pinar but more lived in lanes of shops, wine bars, the odd local art gallery and, most especially, drying washing

The Manzioli Wine Bar is special. Except for a couple of locals sitting drinking morning coffee outside the entrance, the bar was very quiet when I arrived and the chap running it, Peter, was able to spend some considerable time explaining the local wines to me. I take back all that I said yesterday about the wines of this region. Certainly, many of the local white wines are different but that is because they are “orange wines”. Orange wines can take some getting used to but with the right frame of mind and the right food they are seriously good. I am sure there is more to it than this but Peter explained that orange wines are created by making white wines as you would normally make a red wine and, vice versa, red wines are made as you would ordinarily make a white wine. He went into more detail (about how the skins are left to macerate with the pips, grape skin, etc) but that was many glasses, sorry hours, ago and I cannot remember it all.  It will suffice to say that Manzioli make their wines using the Malvasia grape (although I also tried some that were made with the Pinot Grigio) and jolly nice they were too. I couldn’t trust myself to carry any back up the hill to the Van but I’ll return tomorrow to buy some.

The Manzioli Wine Bar, operated by the Zaro family 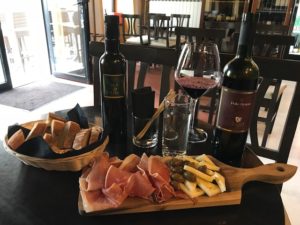 The wine and my lunch: Local Prosciutto Ham and Olives (with the family’s home made olive oil) and Montasio Cheese from just outside Trieste all served with more of the family’s wine, this time their Refosk Red.

Peter made me smile with his comment that the Zaro Olive Oil served with lunch is not necessarily the best in the area (not surprising given that this region is noted for it’s olive oil) but it is home made with olives from their own trees and the alternative would have been to cut the trees down.

Peter in selling mode and the route back to the Van (I’m sure the path was straighter than that on the way in)… almost dusk already.

Not sure how much longer I will be staying in this area but so glad I found it (especially Izola) and, believe me, you have not heard the last of orange wine. I’m quoting Peter now but if nothing else it is a more natural wine than most in that additives, including yeast, are rarely used in the production process. Last word with regards to orange wine, if you try it and don’t like it, don’t give up on it. In Piran I was unsure. Here in Izola I am hooked.

Result! I spoke to a young Slovenian couple yesterday after they asked me to take a photo of them together and they suggested that I should visit Piran if ever I returned to Slovenia. Well that settled it. When I awoke this morning I set off for Piran. Good decision!

I should have reached Piran within an hour of leaving Trieste (despite having to stop and buy another vignette to continue using the Slovenian motorways) but, as has happened so often on this tour, I was sidetracked. Just outside of a place called Izola, about 8 km from Piran, I stopped to check out the Belvedere Hotel which had a sign outside advertising their new camping facility. As camping sites go it is 5 star, which is perhaps not surprising given that the Belvedere is itself a newly opened 4 star hotel. When they offered me a prime site (take a look at the photo below) at just 6 euros a night and with the promise I could use some of the hotel facilities I simply had to accept and I subsequently took my lunch at a small bar down on the marina in Izola.

I liked what I saw of Izola and will return tomorrow to explore further but first impressions were favourable. It seemed to me to be a small working fishing port that looked a little like Venice (that will be down to some of the architecture). 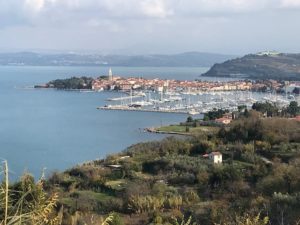 In the afternoon I pulled the push bike out of the Van with a view to cycling the 8 km to Piran. One bloody big hill later I took the bike back to the Van and started walking to Piran. Bicycles are hard work in such a hilly country.

It would have taken me less than 2 hours to walk to Piran but I wasn’t comfortable walking along the main road this close to Italy (the Italian drivers in Trieste did that to me) and I found a much safer, albeit considerably longer, coastal route. 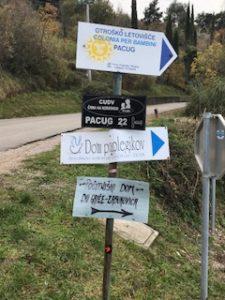 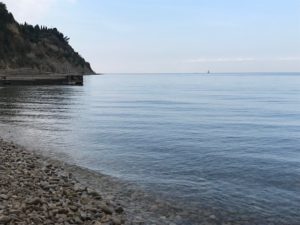 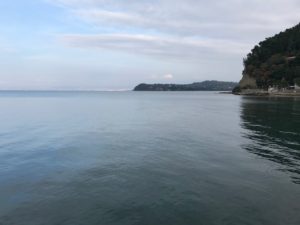 The views forwards and backwards were pleasant. With good eyes and a little imagination you can just make out Trieste in the (very) far distance of the second photo.

View’s inland weren’t bad either. I even found a PADI Dive Centre (closed for winter) and/but seeing that prompted me to test the water temperature – too cold for me.

Piran is sensational. It is less than 50 km from Trieste by car but a million miles away in terms of content and atmosphere. As with Izola, some of the architecture reminds me of Venice but there’s not the hustle and bustle of Venice. It is a place to eat and drink and do little else but watch the world go round. The local wine takes some getting used to. They mix (I will not use the word blend) about 5 different grape varieties and create the driest wine I have ever tasted and it doesn’t really appeal. On the other hand, the local food is seriously good. Piran is famous throughout Slovenia for fish and especially its Sea Bass caked in local salt. That’s all I’m going to say about the food until I complete my trip advisor report (Will?).

Here’s a few photos of Piran:- 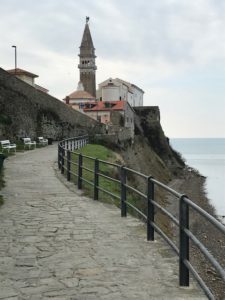 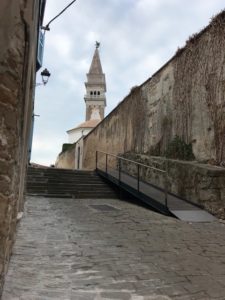 You follow the headland round and suddenly you are confronted with your first sight of the town, the Bell Tower of St George’s Parish Church. You are then presented with a choice of narrow alleys to follow but keep going up and you find St George’s 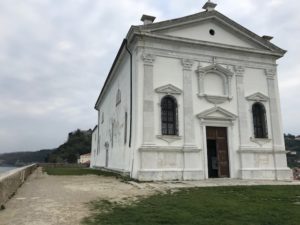 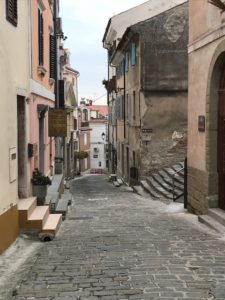 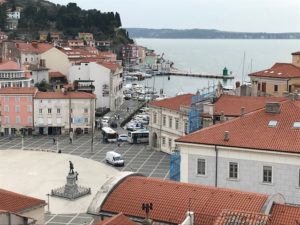 Follow the narrow lanes down and you will reach the main square with it’s statue of that famous violinist Giorgio Tartini(?) 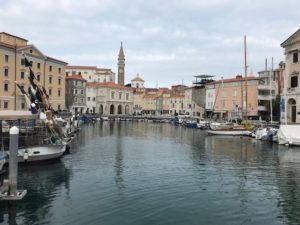 Views from the harbour walls are impressive. I nearly forgot the castle and town walls at the top of the hill 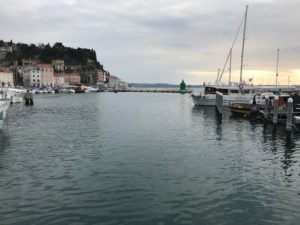 I’m told there’s another coastal walk somewhere in that direction going to Portoroz, another more modern but equally interesting town. Maybe the day after tomorrow…

Okay, just one more comment about food that I think best reflects Piran attitudes. The McDonald’s Restaurant that was opened here had to close in less than a year because no one was interested. Now that’s what I call music!