Today rates as one of the best days of the tour, my primary objectives being to (i) revisit Diocletian’s Palace and; (ii) walk up the Marjan Hill for it’s supposedly spectacular views of Split and; (iii)  eat a small tub of fritules (not unlike little Rum Baba’s that the Wimpy Burger chain used to sell). All three objectives were accomplished but the Marjan Hill really stood out for me.

I was on the 25 bus into Split just after 7.30 am and had walked, I think, every aspect of the Palace before most of Split had finished their first cup of coffee at work. I’m not saying that I have seen everything of the Palace. It is one of those places that you will see something different no matter how many times you go. What is unusual about this site compared with others is that it is open to the public and available throughout the year to walk and touch- it seems a bizarre way of preserving such treasures. I took far too many photos but will include just a few otherwise this will look more like a photo album than a blog.

There’s a bust of the Roman Emperor Diocletian, a local boy made good, who made life seriously uncomfortable for the Christians. The second photo is of the Peristyle (a garden porch that leads into what were his living quarters) and the third a bit of artistic detail from the Peristyle which caught my eye. 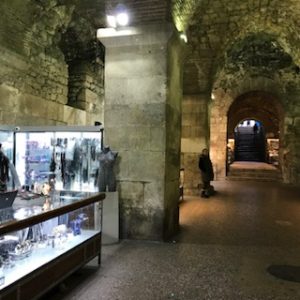 Much of the Palace is still being used. The first photo is of one of two parts of the Palace that were converted into scenes for the TV mini-series “Game of Thrones”. The other two photos show areas that are currently used as an indoor market

It is ironic that within 300 years of Diocletian dying, his sarcophagus was destroyed by Christians and his Palace Mausoleum converted into the Sveti Duje or Cathedral of St Domnius, Domnius being one of many who were martyred during Diocletian’s persecution of the Christians. 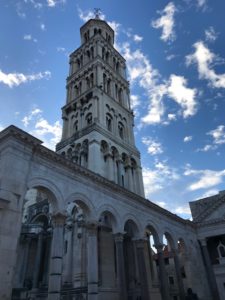 The real surprise today was the Marjan Hill. It made my day because it proved to be more than just a place to take “spectacular views of Split”.

Because I had seen all I needed to see of the Palace before 9 am, I had sufficient time to walk around the Marjan peninsula and ascend the hill from the rear (instead of taking the more direct approach from the marina). The walk around the peninsula was noticeable for the scent of oranges (fully ripe later this month) and for great views out to sea but it was the walk up the back of the hill through the Mediterranean Pine Forest that was special.

The ascent was easy; very gradual with excellent paths and requiring minimal effort to reach the first of the two summits on the 178m hill. For most of the way I walked the old road which, at least during the low season, is restricted to pedestrians and cyclists. The views out to sea and across to Trogir improved as height was gained but the real interest was on the inside against Marjan’s steep cliff faces. 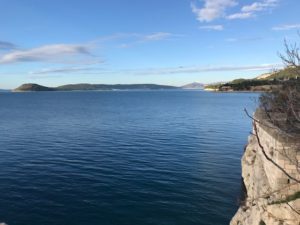 View across to Trogir during the ascent

There are a number of hermit caves and small churches dotted around the south side of the hill; with the most interesting being the 15th century church of St Jerome, which you would miss altogether unless ascending the hill from the rear. I took a video of St Jerome which I posted on Facebook earlier today that says it all. Also, the sheer cliffs on the south side and to the rear of the hill (many with significant overhangs) would appear to offer excellent climbing. I sat for an hour watching in awe as a couple of free climbers went to work on those cliffs. 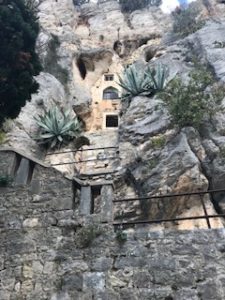 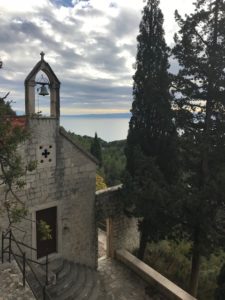 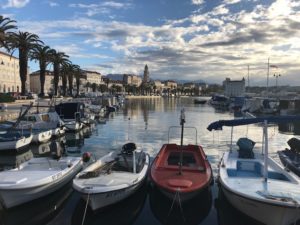 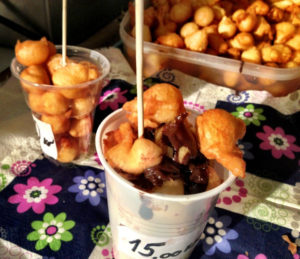 Fritules with a healthy blob of chocolate- delicious