An unusual but very enjoyable day. The weather wasn’t good this morning (low cloud and showers) and I postponed the ascent of Klinitsa. Plan B was a walk down the Lousios Gorge to view some of the monasteries, churches and/or ruins. Different!

The walk itself did not begin too well. There has been much rain in the area during the last few days and the paths down into the Gorge from Dimitsana were flooded: 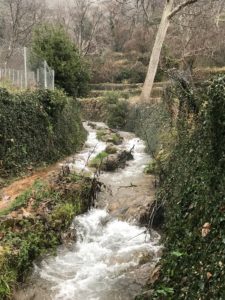 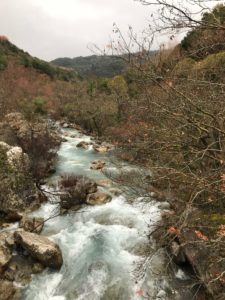 The early parts of the paths were like streams or small rivers in some places. Still, I have good walking boots and, most important, poles

It took me a (wet) while to get properly underway but by mid morning I was through the worst of the flooded areas and making good time down first the left bank and then the right bank of the River Lousios on a well trodden and clearly marked path to the first monastery of the day, the New Filosofou Monastery: 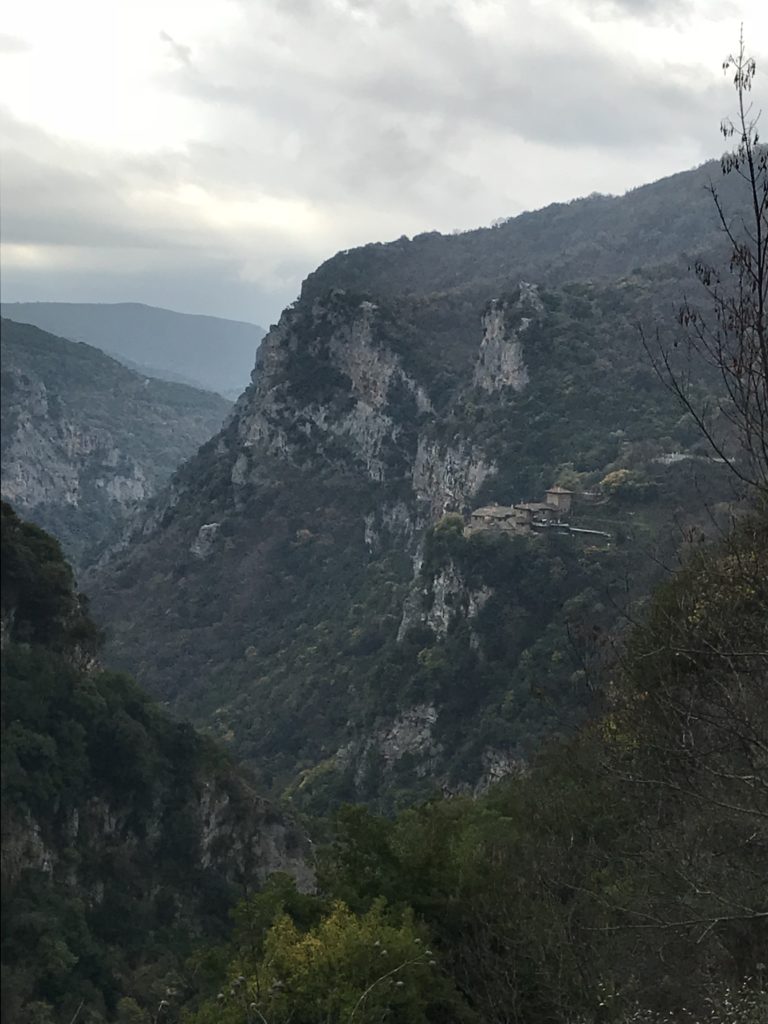 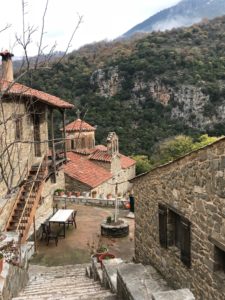 The reception I received from the resident priest at New Filosofou, Father Magelis, was wonderful (although not altogether surprising – James and Katherine had mentioned him in their blog). Water and (Turkish) Delight were offered – although they don’t use the word “Turkish” in this context (it’s reminiscent of the Ottoman Empire) – and Father Magelis showed me around the sacristy and talked a little about the place. He told me that he has lived in the monastery for the last 8 years and his one companion, the resident monk, has been there considerably longer although he would not be drawn as to how much longer. Not wanting to outstay the welcome I took a few photographs and moved on but I do think Father Magelis would have been quite happy for me to stay longer. What with the flooding I don’t think he will be getting too many other visitors today. 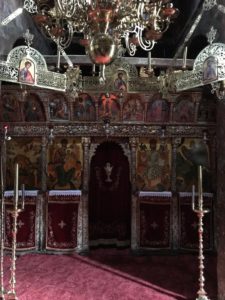 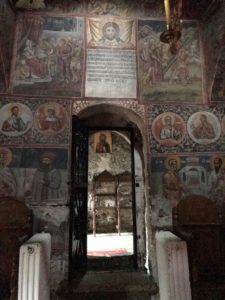 It is a small sacristy with some beautiful murals

The next stop was the Old Filosofou Monastery which is about 400 metres further south. The place is long abandoned and totally derelict – but it is still accessible and worth the step up. The approach is overgrown and there have clearly been a number of rockfalls in the area and I suspect it will not be long before this old monastery is put out of bounds for safety reasons: 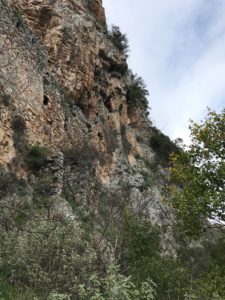 It is a well concealed Old Filosofou up there 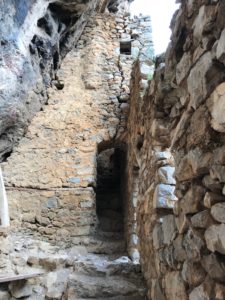 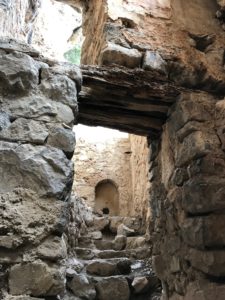 Cut into the rock and with none of the mod cons of the New Monastery. Hard living indeed

The third and final monastery of the day, the Timios Prodromos Monastery (the Monastery of St John the Baptist), is less than 30 minutes walk from Filosofou and with the path and the weather continuing to improve I was able to slow down and enjoy more of the views: 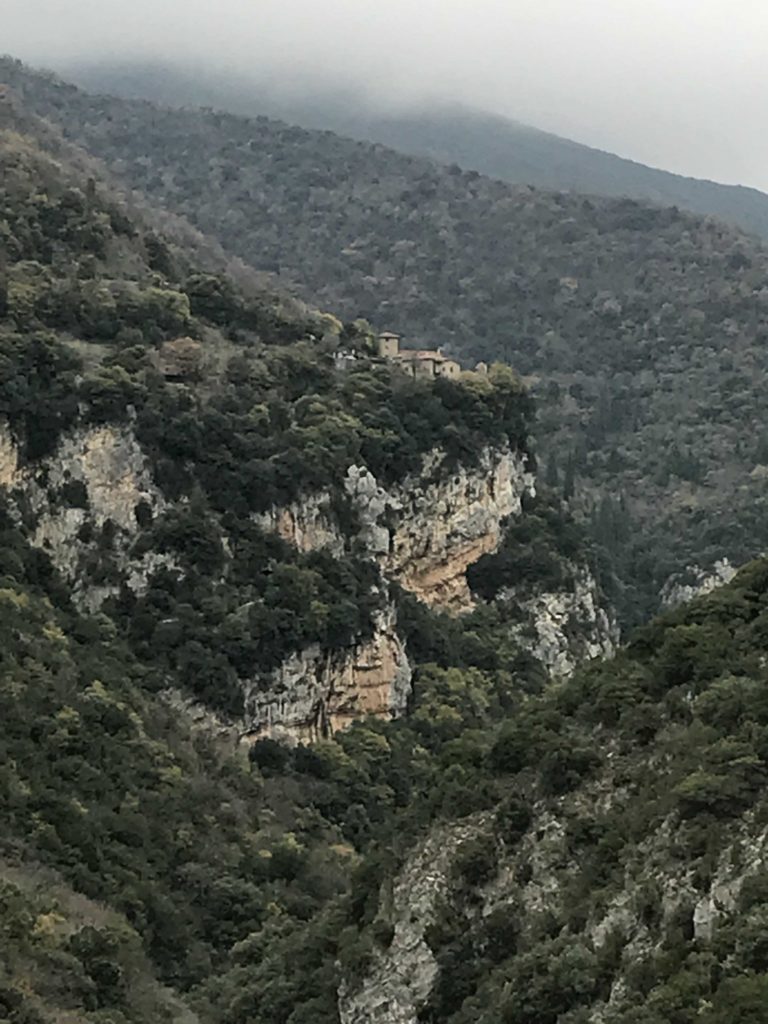 That’s the view back towards the New Filosofou

Soon enough I had crossed back on to the left bank of the river and was up underneath the Timios Prodromos Monastery. This place is wholly different to the New Filosofou, being built directly into the cliff and; it is much larger, currently housing 7 priests and monks. It could accommodate more but I am not in the least tempted – this is a seriously austere existence. 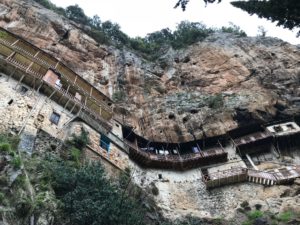 There’s the monastery up above 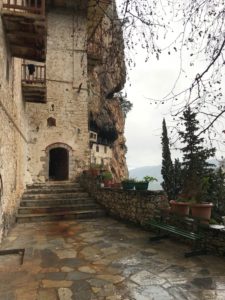 There’s the front entrance but I see no bell 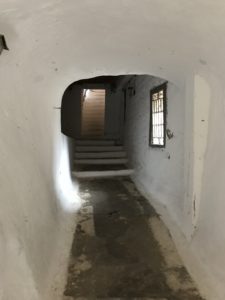 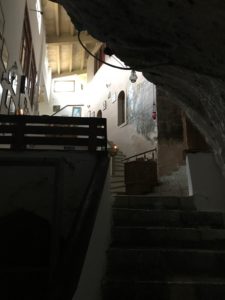 Wow. Looking good but still no one around

A young priest greeted me just outside the sacristy (expressing surprise that I should be out in such weather) and invited me to join him for coffee. He has been in the monastery just a few weeks and, having ascertained that I am English and that my journey to Greece started from Manchester almost 3 months ago, he was anxious to know whether I was a Manchester City or Manchester United fan and how each team is doing. There was a long silence after I informed him that I am a West Ham fan but, for all that, he still spent some time showing me around and talking to me about the monastery. 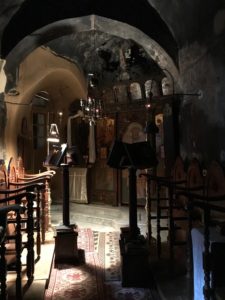 Above, a very small sacristy but space is at a premium with the monastery having been cut into the cliff face 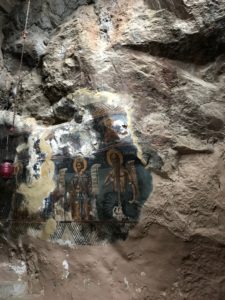 … and some religious scenes painted on the cliff walls alongside the sacristy. These were painted in 1919. 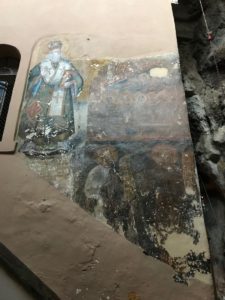 Paintings on the wall to the sacristy. Some of these are said to have been painted in the 17th century. 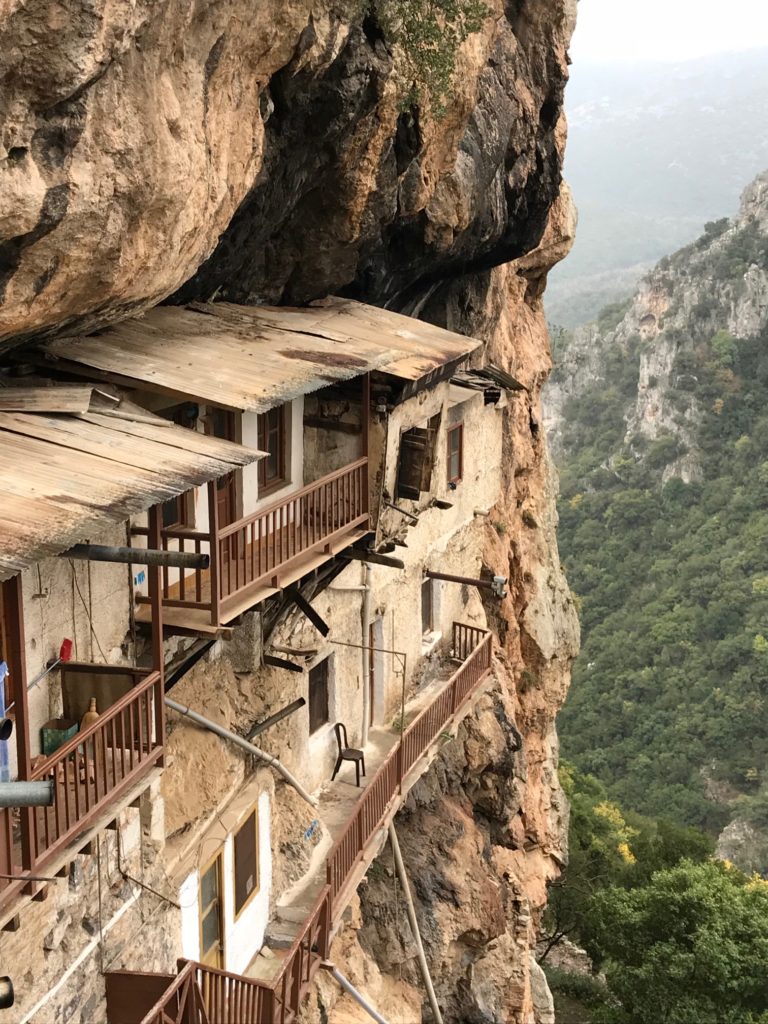 The living quarters; rooms with a view. It is said that Theodoros Kolokotronis (remember the Nafplio blog) used this monastery as a refuge during the fight for independence.

The weather was steadily improving and notwithstanding a fairly lengthy stay at Timios Prodromos I had made good time since leaving Dimitsana. I therefore decided that if the weather was still okay when I reached my next stop, the Metamorfosi Sotrosi Church, I would give the ruins at Gortyna a miss and, instead, make my way to the village of Stemnitsa and then on and up Mount Klinitsa. The map I have is not brilliant but it looks as if the summit is only about 500 metres higher and 2 kilometres beyond Stemnitsa.

The church of Metamorfosi Sotrosi is a nice little church with a viewing platform that offers great views up and down the Lousios Gorge: 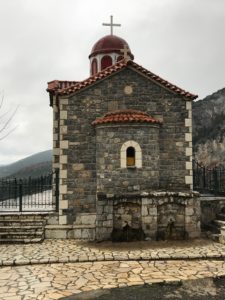 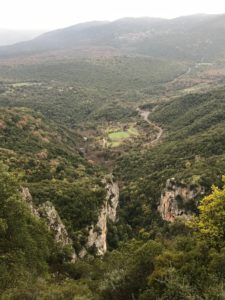 … with views to the south 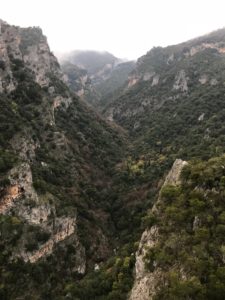 … and views to the north

The weather at Metamorfosi Sotrosi held off and I set off up to Stemnitsa and then Klinitsa. What a result!

And then it all went pear shaped: 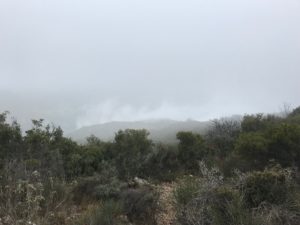 Above, I’m near the Kamari Spring. A hard push of about 40 minutes or so should see me at Stemnitsa but… is that cloud forming? 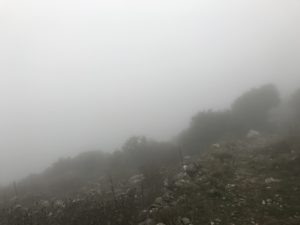 Yes. The cloud is very quickly getting much thicker. I don’t need this. 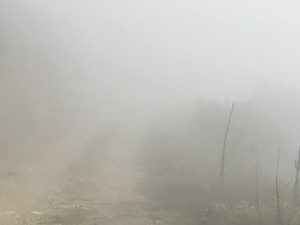 There it is then. It isn’t so thick that I’ll not be able to find my way to Stemnitsa but it doesn’t look good for Klinitsa

Well, I made it to Stemnitsa but by then, the cloud or fog was so thick I could barely see 2 metres in front of me. If the church bell hadn’t chimed as I arrived I honestly wouldn’t have been able to find my way around the village.

There was no way I could continue up the mountain. I therefore did the next best thing… 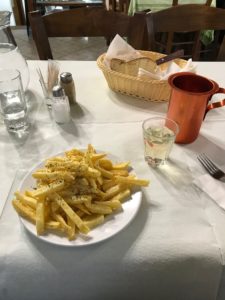 A half litre of wine and a plate of chips… and that’s just for starters.

I’ll worry about getting back to Dimitsana once I’ve eaten. There’s bags of time now I’m not doing the mountain.