Walked in the cold air (it was cool this morning and there was some serious wind chill) and, Oh Vienna! Been here a few times but yesterday was truly enjoyable.

In keeping with my promise to take in some culture during this tour, I started the day off in the Welt Museum on Heldenplatz; staying almost two hours and learning more about Mexico (of all places) than I have in 9 holidays there – the Welt Museum is an ethnographic museum focusing on non-European cultures and Mexico just happens to figure in the current exhibition. 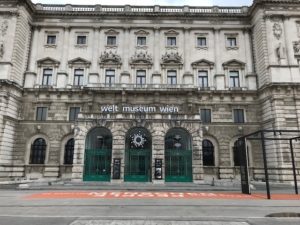 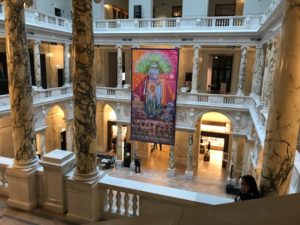 Inside the Welt Museum 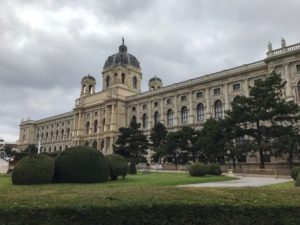 The Natural History Museum  – one of two near identical buildings on the Maria-Theresien Platz in the Museumsquartier, the other being the Art History Museum 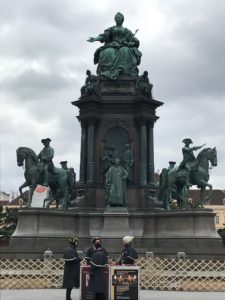 The culture theme continued with Gerhard gaining us access to the Burgtheater (the National Theatre) Canteen where, rubbing shoulders with such artists & technicians as were around, we partook of a local pork dish and a couple of glasses of Gruner Veltliner  before setting off on some further sightseeing. 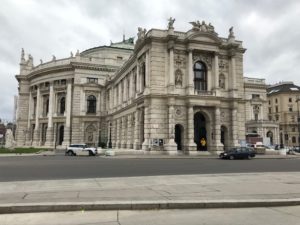 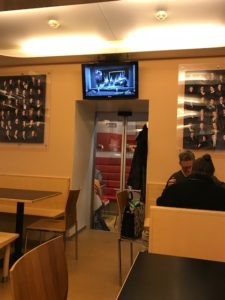 Inside the Burgtheater canteen. Through the door is a smoking area (Austria has refused to ban smoking in public places) and the tv screen above the door keeps diners aware as to what is happening on stage.

Heldenplatz is in the centre of the city and as good a place as any to begin a tour. In addition to the aforementioned National Theatre and the various museums and art galleries, the area is home to further amazing buildings including the Burgtor (an arch built to commemorate Austria’s beating Napoleon at Leipzig) and the Hofburg Imperial Palace (the seat of power of the Hapsburg dynasty) a part of which is the Neue Burg (where Hitler  famously announced the Third Reich’s annexation of Austria). Close by are the Rathaus Building (the City Council Offices) and the Austrian Parliament which perhaps don’t sound all that appealing but which are seriously impressive buildings. You need only look at the photos. 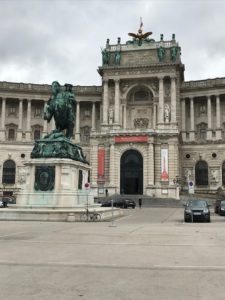 The Neue Burg section of the Hofberg Palace 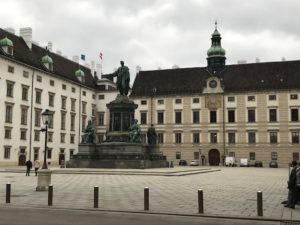 The Amalienburg section of the Hofburg (a part of which is the Spanish Riding School with its famous Lipizzan Stallions). 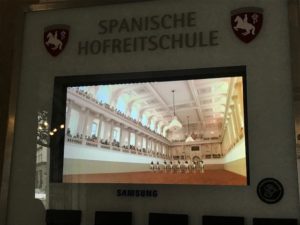 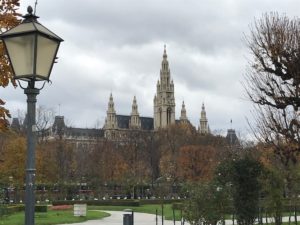 Also nearby (just a few minutes walk) is Graben, a pedestrianised shopping area that is home both to the usual designer stores, numerous schnapps bars (I like the apple schnapps best) and some great wine bars (of which The Black Camel stands out). Oh, and there is the ubiquitous Irish Bar.

One of Graben’s more picturesque arcades

Once again it was dark by the time we got back… 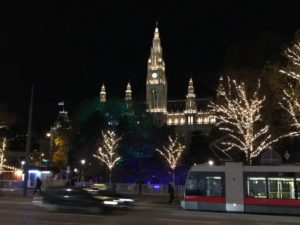 The Rathaus at night.

I could easily spend many more days here but I really should be moving on. Winter is coming and I want to be in warmer climes before then.