Left Izola yesterday morning and was in Croatia in about 30 minutes. First time I have seen any border presence (other than when the Swiss police simply waved me through from France) with police on both the Slovenian and Croatian side of the border wanting to check passports.

My first stop in Croatia was Umag for a quick walk around and a spot of breakfast (pleasant). The second scheduled stop was at Novigrad for a longer walk around and lunch (more pleasant) but in between I stumbled upon Lovrecica (most pleasant).

I was swearing at the time (very rare during the course of this tour) because the road from Umag to Novigrad  was blocked for roadworks. No warning, no detour signs, nobody to explain what is going on; just barriers blocking my route. And of course in such situations the sat-nav really doesn’t help;  continually urging me to follow the same road despite having it explained in no uncertain manner that the route is closed. Enough to drive anyone to distraction. Well, I turned off the road to consult a map and found myself in Lovrecica. Within moments, I was chilled and properly focused to resume my journey. 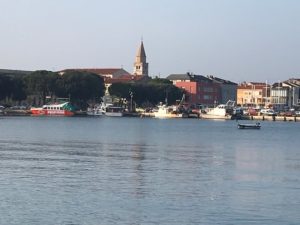 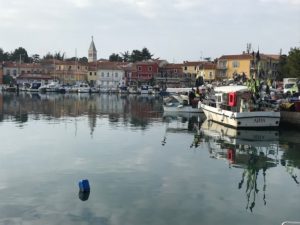 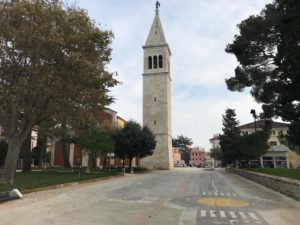 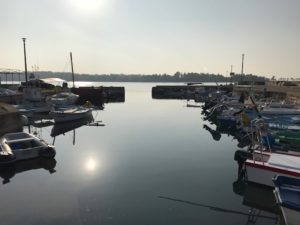 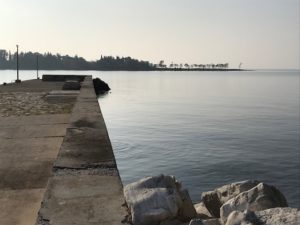 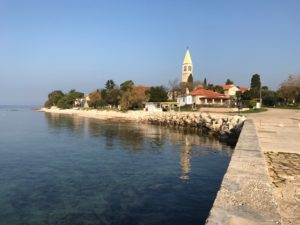 Lovrecica – that house alongside the harbour in front of the church is up for sale. Needs a bit of work but I would be sorely tempted if Lovrecica had a few more amenities – the village is just a bit too small

Was going to spend the next day or two in Porec (just further down the coast) but I think I will leave that for the return journey and head for Krk now. No particular reason. I saw it on the map and, as the Irish would say, I fancied the Krk (although they spell it craic).