Well, the weather forecast was so bad today (thunder, lightning, torrential rain & hail) I decided to sit tight in Shkoder… and that is what I should have done!

Somebody in the taverna last night suggested that the Rozafa Fortress is worth a visit and late this afternoon, like a wally, I thought I would take advantage of a break in the bad weather and visit the fortress which is very close. I mean, how long can such a heavy storm continue? Needless to say, with the weather as bad as it is there was no one else up there.

The fortress is in ruins and the only possible shelter was locked for the winter and so when the bad weather resumed (which it did as I approached the furthermost point of the Fortress) I was well and truly caught. It was bad and more than a little disconcerting with the thunder banging and cracking at the same time as the lightning flashed. I think the storm was right above me. Not nice. All I could do was hunker down and wait it out and thank the heavens I was wearing my Paramo jacket. I wished I had the Paramo trousers on too because the Craghoppers were rubbish – sodden in seconds. Anyway, I’m back at the Van now drying out while I write this blog.

I managed to get a few photos before the heavens opened but they are not amongst my best:- 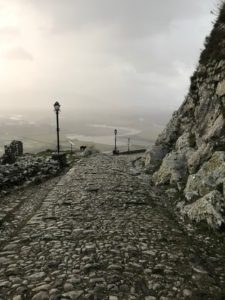 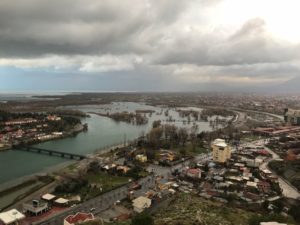 First photo is looking back down the route up to the fortress and the second is the view down over one of either the Bojana or Drin Rivers. Whichever river it is, it has burst it’s banks. No surprise there with this storm 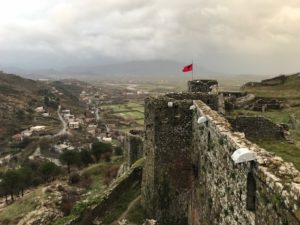 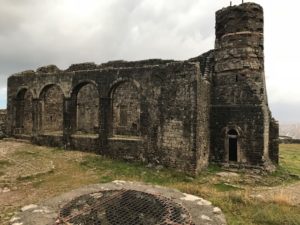 First photo is of some of the fortress walls. The second is a photo of what was a 13th century church, St Stephen’s, built inside the fortress and which was subsequently converted into a mosque when the Ottoman’s took the fortress from the Venetians

Apparently, there has been a fortress of some sort on this site since the Bronze Age some 4,000 years ago but it really came to the fore in 167 bc when the Romans took it from the Illyrians. Since then it has changed hands many times with most of the current fortifications having been built by the Venetians.

Local legend has it that it was 3 brothers who first started work on a fort here but the walls kept falling down. They turned to a wise man for advice and he counselled that they should offer up a human sacrifice to be interred in the walls. The brothers argued long and hard about whom to sacrifice and ultimately agreed that whichever of their wives brought them lunch the next day would have to be the sacrifice and/but that the wives should not be told of this decision – fate would determine which wife should be sacrificed. The two elder brothers reneged and told their wives of the plan and they in turn made sure the youngest brother’s wife delivered the lunches. The young girl, Rosafa by name, was subsequently interred in the walls and that is how the fortress came to receive its name. It is sad but it is only legend.

The legend continues to the effect that Rosafa had a newborn child and as she was being immured she pleaded that the brothers leave sufficient holes in the wall such that she could see and continue to feed her infant son. It seems a bit far fetched but there is another photo:- 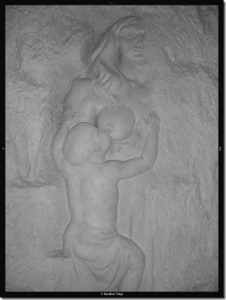 Anyway, enough of that. It is time I put on some dry clothes and went for dinner. I ate in the Legjenda Bar Restaurant last night and it was very good and I promised to return.

Legjenda Restaurant, complete with log fire. I’ll be next to that this evening 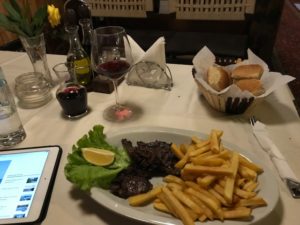 post script – it seems today’s storms were the heaviest the Adriatic has seen since 1986 – I believe it!