The weather forecast for the Messenia Peninsula over the next few days is not good – lots of rain is on its way. Because of this, I determined early this morning to head east towards the Mani Peninsula but, with the poorer weather not likely to hit Messenia until the afternoon, I decided first to visit Methoni Castle which is just a few kilometres to the south of Pylos. Really glad I did.

Clearly, there is a storm coming up from the south. That much was obvious this morning from the rough seas that almost surround Methoni Castle but the deteriorating weather made for a much more atmospheric visit and it seemed to keep everyone away today except me.

Originally a medieval fortress, Methoni Castle was developed in turn by the Venetians, Turks and French to become a castle town complex spread over almost 10 acres of the southernmost part of Messenia; with an additional octagonal tower (the Bourtzi) built in 1500 by the Venetians on an islet to the south to help with the defences. Two more recent additions include the Church of Santa Sotira and a narrow causeway from the castle to the Bourtzi (both built by the French in the early 19th century).

With the sea on three sides and a deep moat separating it from the mainland, the castle town could only be accessed from the north by a narrow wooden bridge (subsequently replaced by the Venetians with an impressive stone bridge) or from the south by a sea gate protected by the Bourtzi.

The castle town is for the most part in very poor repair; the exceptions being the impressive North Gate, the Stone Bridge, the Southern Sea Gate, the Bourzi and some of the Outer Walls. Some restoration work has begun (particularly on the south east Coastal Tower) but the full potential of this complex as a tourist resort and as a national treasure is not being realised and this is sad because the place is truly captivating. 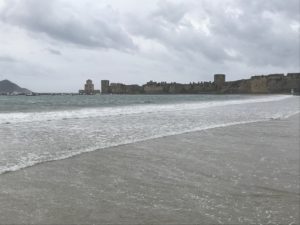 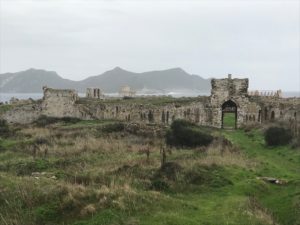 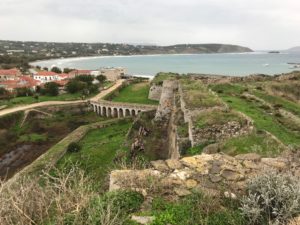 First photo is of Methoni Castle from the beach. Second photo is of some of the inner defences while the third is from the castle ramparts towards the stone bridge at the north gate. Not great photos but they help illustrate how large the complex is 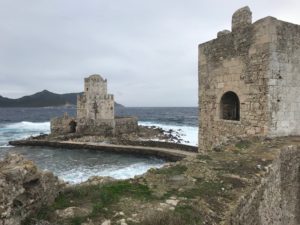 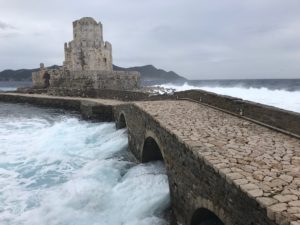 First photo is of the Bourtzi from the castle ramparts to the left of the Sea Gate (I shouldn’t have been on that wall but since I was the only one around I was able to clamber all over the place). The second photo shows the French built causeway with a fairly rough sea crashing through the arches 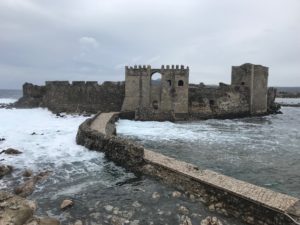 The Sea Gate from Bourzi. The Turks used the Bourtzi as both a prison and an execution centre. Most of the garrison were executed in the Bourzi when the Turks first took Methoni Castle

The last comment with regards to Bourzi is not a very nice note to end this blog on so I will change all that by remarking on how very clean and tidy the village of Methoni was today. Not a blue plastic bag or empty plastic water bottle in sight. Well done Methoni.