Parked safely outside today’s destination which is a small restaurant near Lozavac in Croatia. I should have reached this place within 3 hours or so of leaving the island of Krk but circumstances worked against me and the journey took more than 9 hours. It seems I was caught out by a White Bora that is headlining this evening’s news on Croatian TV because of it’s sudden severity.

I’ve been lucky with the weather so far but that changed last night with strong winds and torrential rain seeming to target the Van immediately after I settled down for the evening. I must have been woken 3 or 4 times during the night with rain hammering on the roof (I mentioned in an earlier blog that such heavy rain is going to take some getting used to). Anyway with a full 48 hours of unsettled weather being forecast I determined over breakfast to head further south. With hindsight, I would have been better waiting another day.

The winds were very strong as I drove back across the Krk Bridge to mainland Croatia and you’ll see from the photos below why I had to keep my speed below 25 mph. The Van was exposed to the wind and blown all over the place.

The Krk Bridge (not my photos)

The weather deteriorated throughout the day and twice I was forced to leave the motorway because of roadblocks. I wouldn’t ordinarily mind that kind of inconvenience but, as was also mentioned previously, Croatia doesn’t  use detour signs. You are simply directed off the motorway, compelled to pay the toll and left to your own devices thereafter. It is so frustrating. 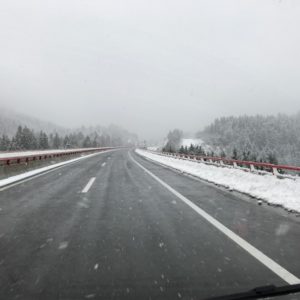 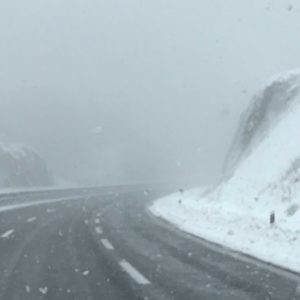 Weather deteriorating; it is only a matter of time before the motorway is closed (but twice several miles apart and why oh why do they not identify an alternative route?!?)

Unfortunately the alternative routes I chose took me up and over some rather intimidating mountain roads. It became colder as I climbed; the wind increased; the blizzards thickened and the situation worsened (the roads seeming to become narrower and the bends sharper and the drops steeper). You’ll forgive me for not taking any photographs. I stopped just the once to take a photo and was quite literally blown off my feet.

I’d like to say it was soon over but it wasn’t. It took forever and, to make matters worse, there was hardly anybody else on the road. Not surprising really; it is a Sunday with a poor weather forecast and with the police closing roads left, right and centre. Mad dogs and Englishmen… etc.

Enough of that. All is now well and although the strong winds persisted throughout the journey to Lozavac, the really bad weather ceased once I was back down in the valley. Check out the following photo looking back – a different world. 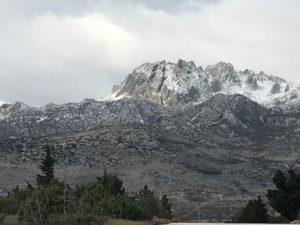 Still a silly hill to have to cross in such conditions

So, what is the Bora? The Bora is typically a dry and very gusty wind that originates in the northeast and travels down the Adriatic (particularly the eastern coast and especially during the period November to March). The White Bora is characterised by clouds and thick snow up on the summits and cold clear weather and good visibility in the lee of the (coastal) mountains – that explains why the weather is so settled this side of the hills I crossed. The Black Bora is characterised by low clouds and reduced visibility but it is less gusty and is accompanied by more rain and snow. The White Bora bodes well for me tomorrow given that I intend hill walking in this the lee side of the mountain range. Here’s hoping…

Croatian news:   Tell me about it…