The Van has been idle in Ancient Corinth the last two days. I went online early yesterday morning, booked a hotel room in Athens and then made the one hour train journey from Corinth to Athens. By 10 am I was checked into the hotel, knowing I was assured a bed for the night, and exploring Athens.

The Corinth/Athens return train journey cost just 14.40 euros and was as easy as pie (I can’t cook pies but in any event the idiom relates to the eating and not the cooking of pies)

I made my way up the Acropolis first so as to get my bearings and determine where the various tourist sites are in relation to each other. Much of the place is under scaffolding and my secondary challenge was to take as many photos as possible without the scaffolding ruining them. I exaggerate a little. 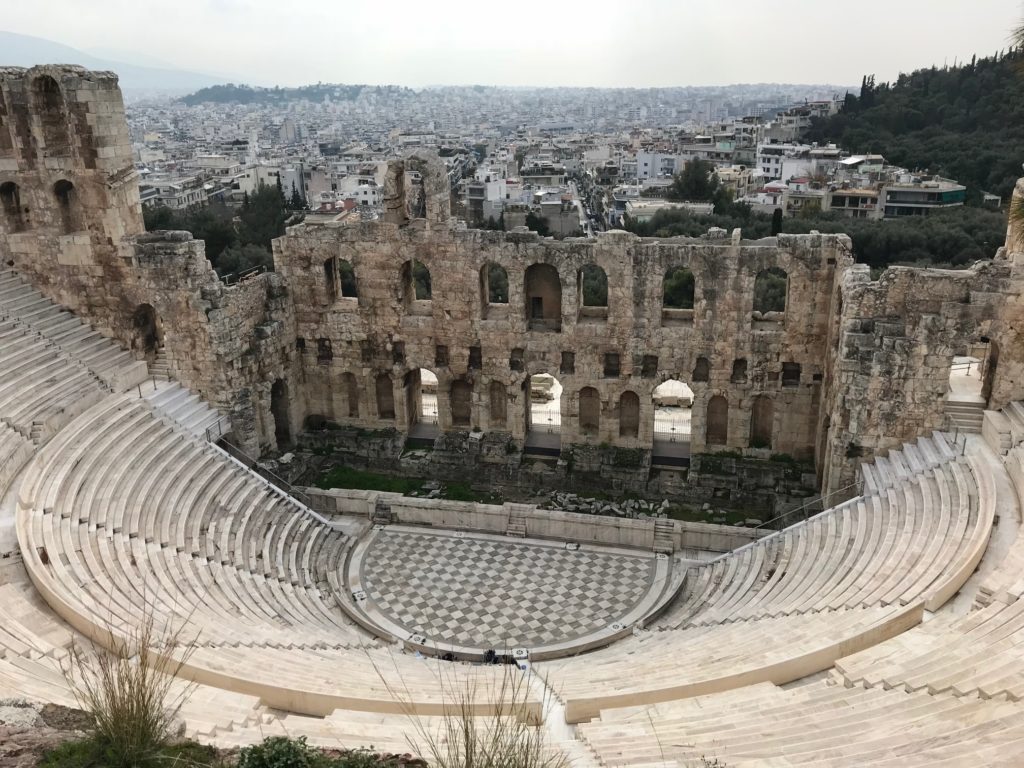 Above, Herod’s Theatre – no scaffolding at all. 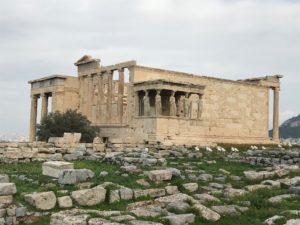 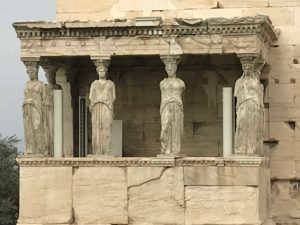 Above, the Old Temple to Athena, together with a detail. It goes without saying that all the structures on the Acropolis are “old”, so I am speaking “relatively” 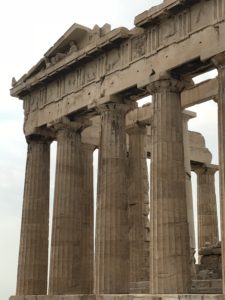 Above, the only aspect of the Parthenon that I could see without scaffolding

The views from the Acropolis were impressive and after deciding to tour the western side of Athens first (i.e. west of the Acropolis) I returned down the hill to take coffee and cake before commencing the walk proper: 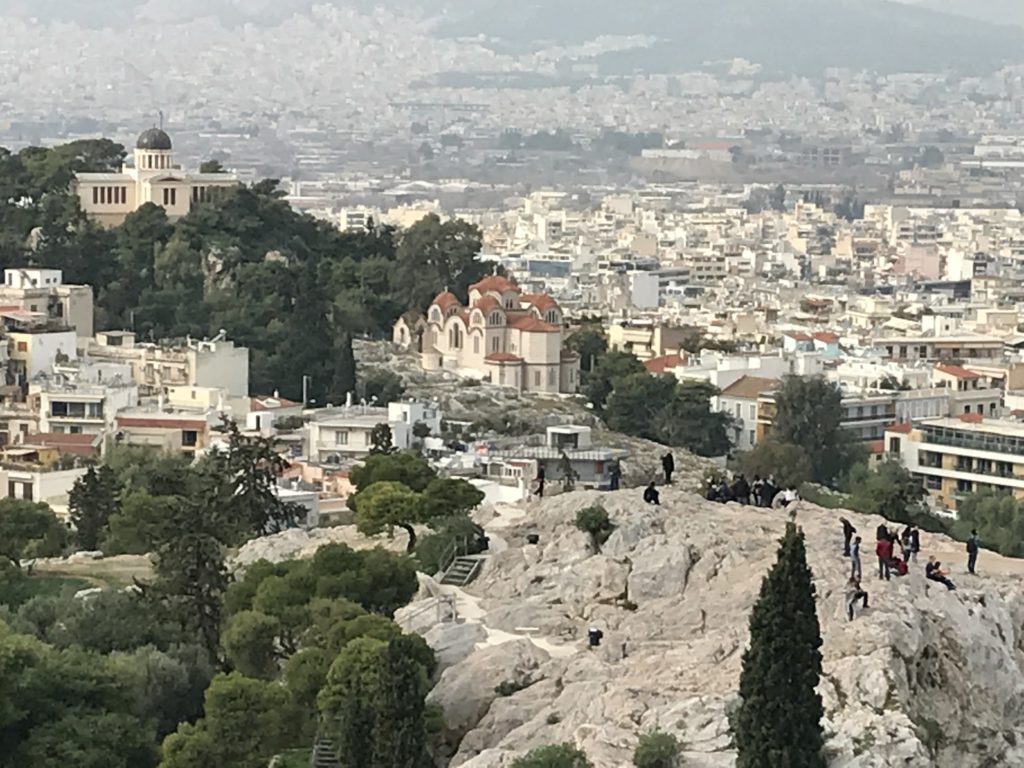 Yes. It will be the west side of the city today… there’s a few churches over in that direction worth looking at (not to mention the flea market and bohemian sector I have been told about) 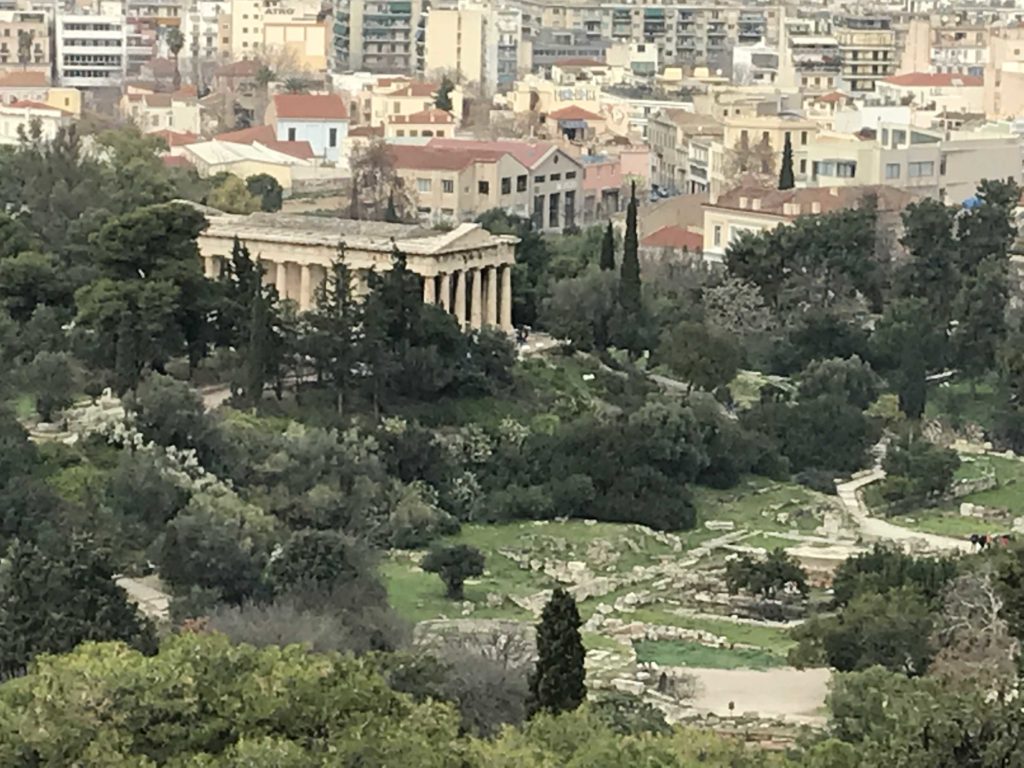 … and of course the Temple of Hephaestus (or Vulcan as he was known in Roman mythology). 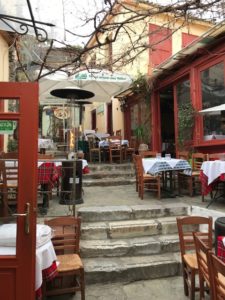 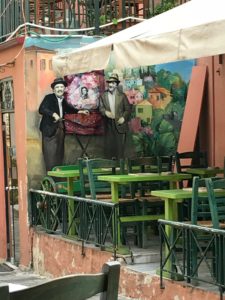 There were plenty of cafe/bars in the lanes leading to and from the Acropolis, one of them with some very lifelike murals – those two blokes looked almost real 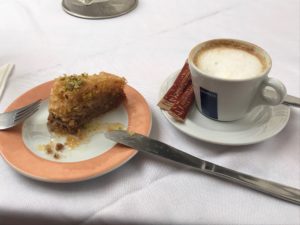 … a decent cup of coffee and some seriously sticky baklava.

As I wandered through Athens I couldn’t help but notice similarities with London, particularly on Athinas where both Meat and Fish Markets can be found together with the Central Vegetable Market. It was like finding the original West Smithfield Meat Market, Billingsgate Fish Market and Covent Garden Fruit & Veg Market all rolled into one and, if that wasn’t enough, the numerous market stalls lining a great many of the streets selling clothes, household supplies and the like could fool you into believing you were in Leather Lane or Petticoat Lane. In some respects Athens is a more compact London. 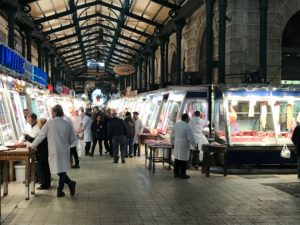 Above… could have been West Smithfield and, below, just like Billingsgate… 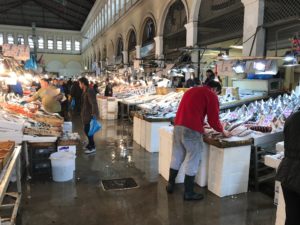 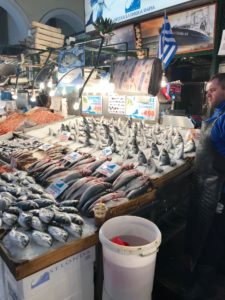 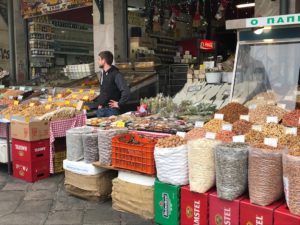 Close to the flea market is the National Orthodox Cathedral (usually referred to as the Metropolitan Cathedral of Athens). I didn’t enter the Cathedral because some form of service was underway but I read that it’s walls were made from the marble of 72 demolished churches. Not many people know that. 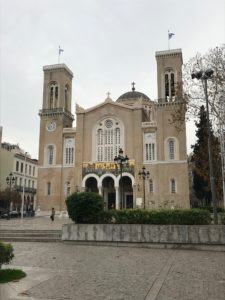 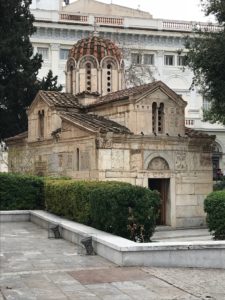 Above – the National Cathedral and the small Byzantine church of St Freedom (Aghios Eleftherios), also known as “The Small Mitropoleos”. They stand next to each other on Mitropoleos Square.

I didn’t bother with photos while exploring either the flea market or the bohemian sector but it was an interesting couple of hours. The flea market is a bit of a misnomer except perhaps on a Sunday when, I am told, certain locals set up stalls in the area to sell various bric-a-brac. Otherwise, it is lots of little shops, more like an Arab Bazaar, and you can buy just about anything although for the most part the produce is as likely to have been made in China as Greece.  No matter, it is a really fascinating place and I spent an enjoyable couple of hours poking around some amazing little shops.

It was getting on in the afternoon and I returned to one of the tavernas up by the Acropolis for a spicy pork dish and a half litre of the house wine in one of the tavernas before making my way back to the hotel for a seriously long soak in a hot bath and a relatively early night. The bath is one of the things I have really missed during this tour and it is a prime reason for my staying in a hotel every three weeks or so.

The next day was about the east side of the city which, while still having some interesting ruins, provides more for government & public sectors, finance & commerce and designer stores. I confess to going into a couple of designer stores and spending a little money. 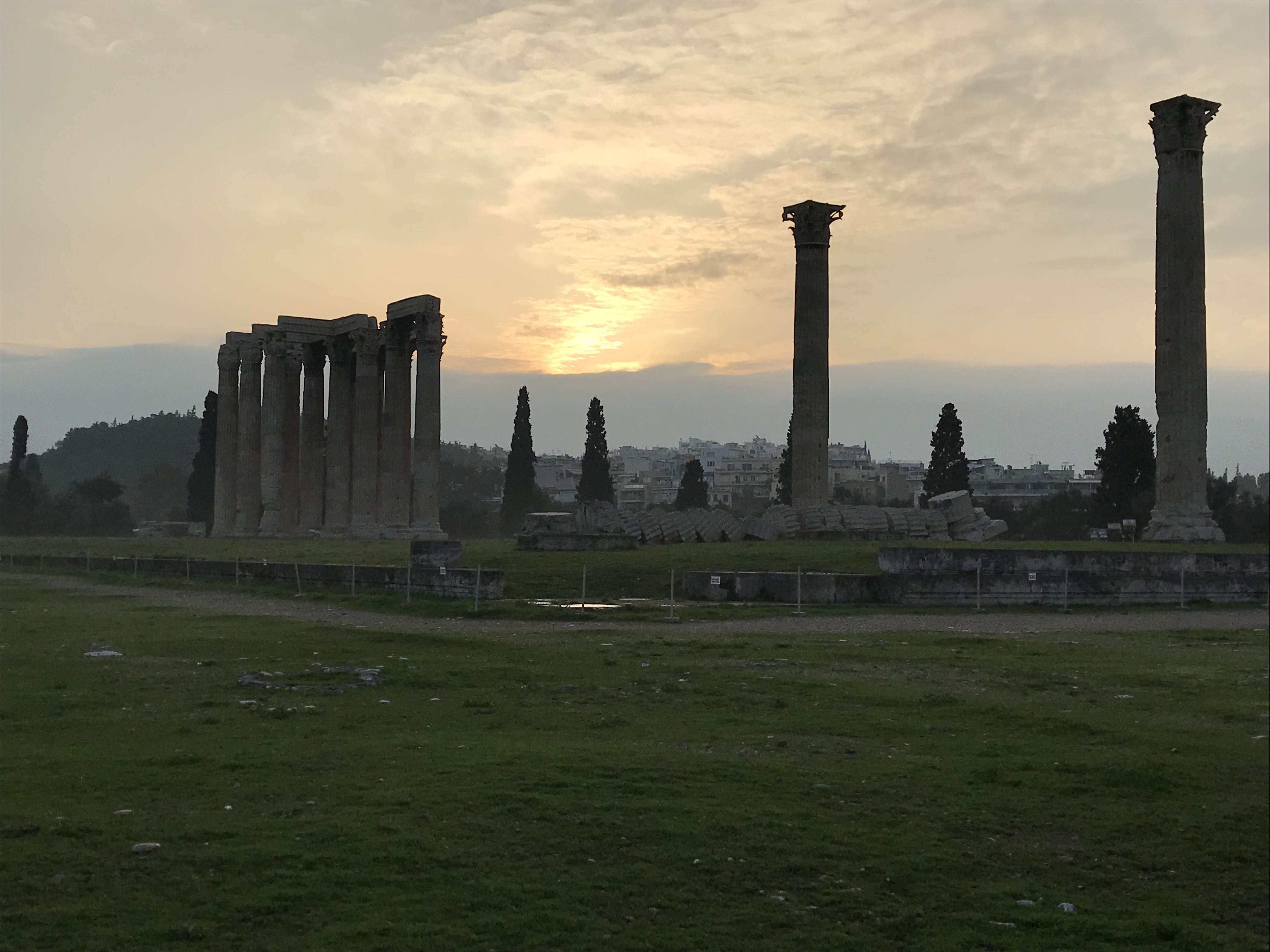 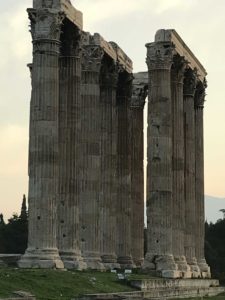 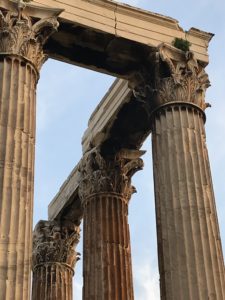 During the last couple of centuries a great many of the more significant buildings in our capital cities have been built in one or other of the Greek architectural styles (Doric, Ionic or Corinthian) – no surprise, it is the same in Athens: 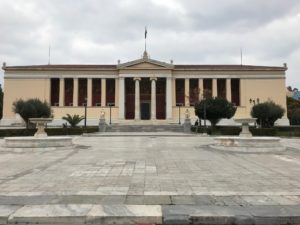 Above – The University of Athens on Panepistimio 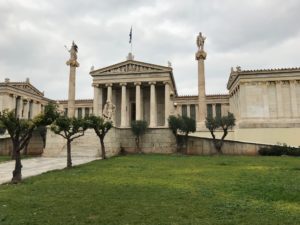 The Academy of Athens on Panepistmiou 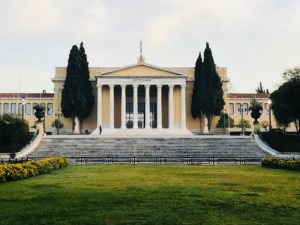 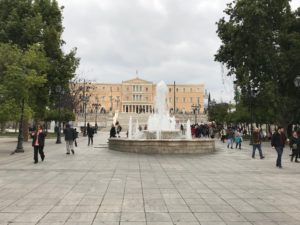 The Parliament Building from Syntagma Square

I hung around for a little while in front of the Parliament Building, at the Monument to the Unknown Soldier, to watch the changing of the guard: 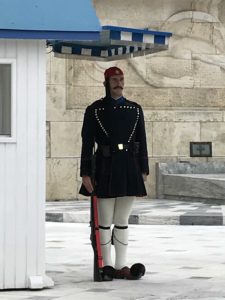 The Presidential Guard (known as the Evzones or, sometimes, the Tsoliades) is a special unit formed to guard both the Presidential Mansion and the Monument to the Unknown Soldier. The soldiers are specially selected and their duties largely ceremonial. The uniform is based on those worn by the Klefts and the Armatoloi (two groups of warriors who fought against the Ottomans during the War of Independence) and is changed from blue in the winter months to brown in the summer. 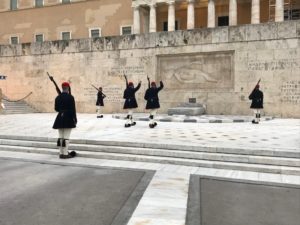 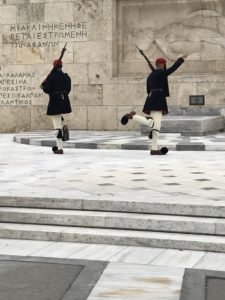 Some aspects of the ceremony defy description and are reminiscent of John Cleese’s “Ministry of Silly Walks” sketch in Monty Python. I wouldn’t say that to them though. These guys are seriously big and very fit. Oh, and those strange shoes they wear each weigh more than 3 kilos.

Anyway, time to end this blog. Sorry it was such a long one but Athens does have a lot going for it. I’ll finish with a couple of photos of fountains on Syntagma Square and Kotzia Square which if nothing else, because of their changing colours, will demonstrate that it is getting on in the afternoon and it is time for me to get a train back to Corinth. 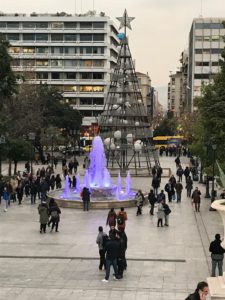 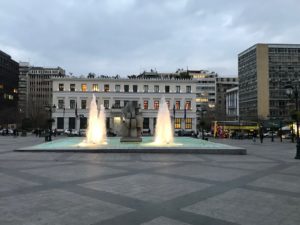