Moved on from Drepano and Vivari although Vivari has joined my shortlist of possible places to buy a property in. Greece is growing on me all the time. The next move was to Ancient Corinth and the Corinth Canal.

Corinth was inhabited in the Neolithic Period (6,500 to 3,250 BC) and grew to be one of the major cities of antiquity with a population of more than 90,000 in 400 BC. Since then the city’s fortunes have fluctuated wildly with the place being almost totally destroyed in 146 BC by the Romans under Lucius Mummus (who also had every male citizen killed and all women and children sold into slavery); then rebuilt by Julius Caesar and Augustus Caesar (both of whom had considerable commercial and financial interests in the area) and then destroyed again in 267 AD after an invasion by the Heruli. Thereafter, Corinth was generally on the decline with further invasions by Huns, Normans, Turks, etc but it was serious earthquake damage in 365 AD, 375 AD and 856 AD (when some 45,000 people were killed) that contributed most to the demise of the city and the final straw came with yet another earthquake in 1858 AD that saw Ancient Corinth evacuated and a New Corinth built some 3 kilometres away.

The last couple of days has seen me parked in what remains of Ancient Corinth. For the most part the place is an archaeological site but a small town has sprung up around the ruins to cater for the tourists who want to visit Ancient Corinth and its attendant hillside fortress of Acrocorinth. I’m using the town as a base from which to visit the remaining places that I want to see in the Peloponnese.

The view from where I first sat in the (developing) village of Ancient Corinth, trying the local wine and some Moussaka… 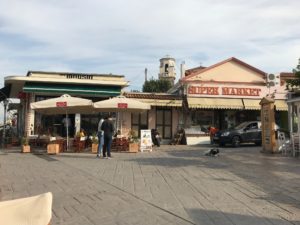 … and the view behind me, with part of the Temple of Apollo visible in the background. The village has quite literally been built around and in Ancient Corinth… 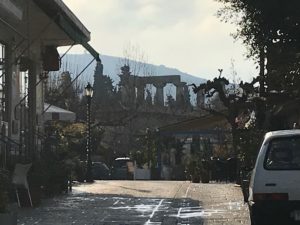 The archaeological site and museum is worth a visit (closed on Mondays but the first Sunday of every month admission is free). It is one of those sites where there is enough still standing that with just a little imagination you can really feel the place.

There follows three views of the Temple of Apollo, built in 550 BC. In the background of the third photo you can see Acrocorinth: 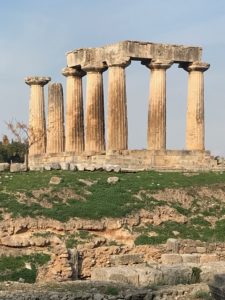 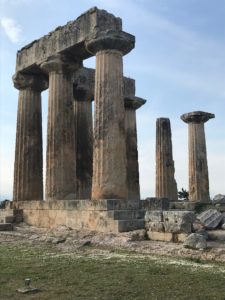 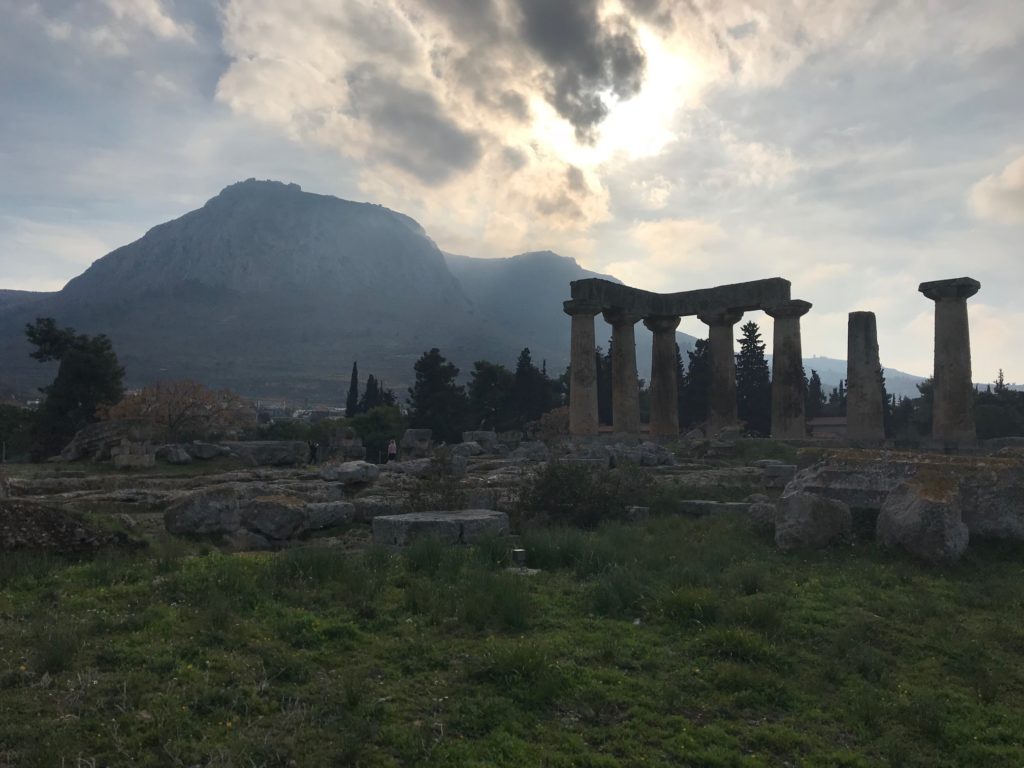 That is Acrocorinth, an abbreviation of Acropolis Corinth, in the background of the last photo. More of that later 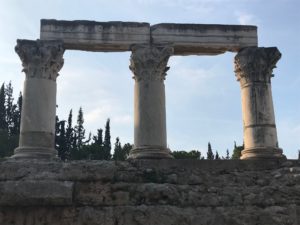 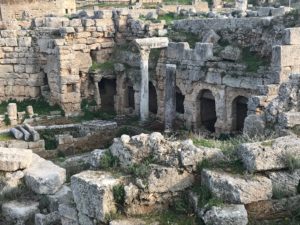 The Lower Peirene Fountain above is a Roman construction built on an earlier fountain. Legend has it that Peirene was a woman whose son was accidentally killed by Artemis and she cried so much the Gods turned her into a spring such that the precious water would not be wasted. An alternative legend has it that the winged horse, Pegasus, created the spring by smashing the ground open with his hooves and that it subsequently became his favourite drinking spot. I am inclined to credit Peirene with the lower fountain and Pegasus with the higher one. Even today, the lower fountain continues to supply water to the town.

Another of the more interesting structures to be found in Ancient Corinth is the Roman Odeion or Indoor Theatre: 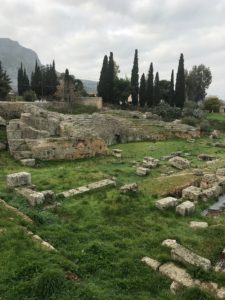 The Odeion. I don’t know why but, it never occurred to me that the Romans might have built indoor theatres; let alone that the Odeon Cinema chain name was derived from the Roman Odeion.

Enough about Ancient Corinth although I took a great many more photos and there was much more to the place than I have touched on in this blog.

The next day was built around a visit to Acrocorinth which is the name of both the fortress and the 575 metre rock it sits on. It is possible to drive from Ancient Corinth up to a small car park near the main entrance but I elected to walk the 5 kilometres or so each way. There’s a small cafe near the entrance but it appeared closed for the winter. 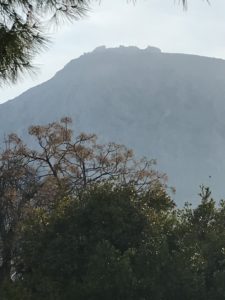 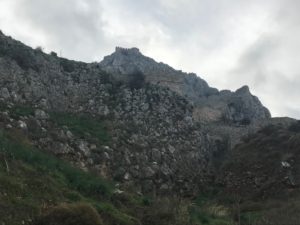 The 5 km walk up to the fortress took a little over three quarters of an hour. There is no admission charge.

The fortress is predominantly of Venetian and Ottoman architecture and is in reasonably good condition around the entrance area but there is also a Frankish keep to the north east that looks particularly well considering its age. 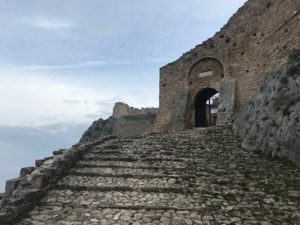 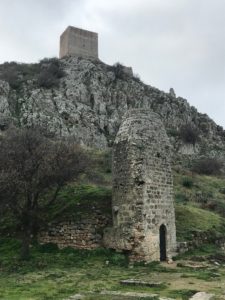 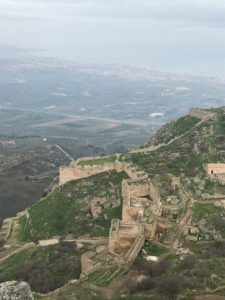 Some of the more distant views from the fortress were fantastic notwithstanding that there was a fair amount of low cloud about: 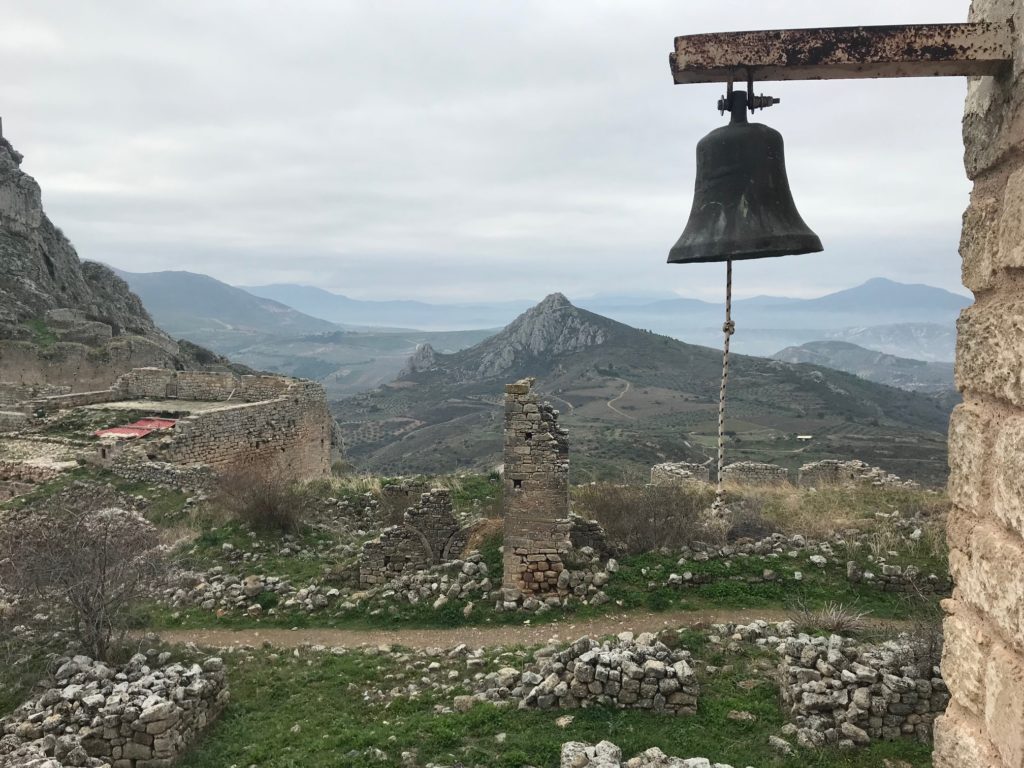 Above is the view from the Venetian Church… 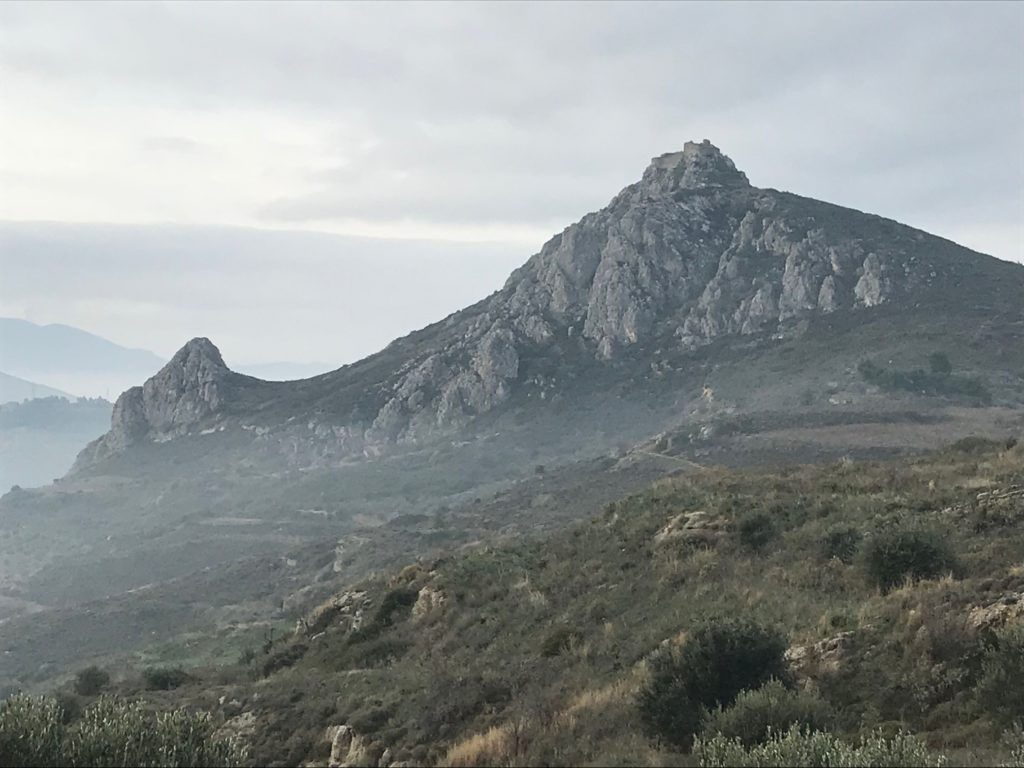 … of a secondary fortress a few kilometres distant

Inside the walls of Acrocorinth (there are more than 2,000 metres of wall) it is possible to view monuments of a sort from each of the main historical periods in the citadel’s history. At the highest point is the sanctuary of Aphrodite with an early Christian basilica on its ruins; below that there is the Ano Peirene Fountain, Byzantine cisterns, the Frankish Tower, a Venetian Church and Turkish mosques, houses & fountains. 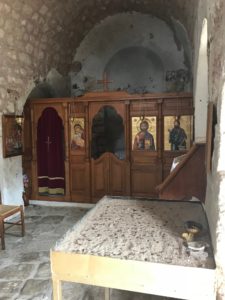 The inside of the Venetian Church

The final picture to be included in this blog is of the Frankish Tower from the highest point of the Acropolis: 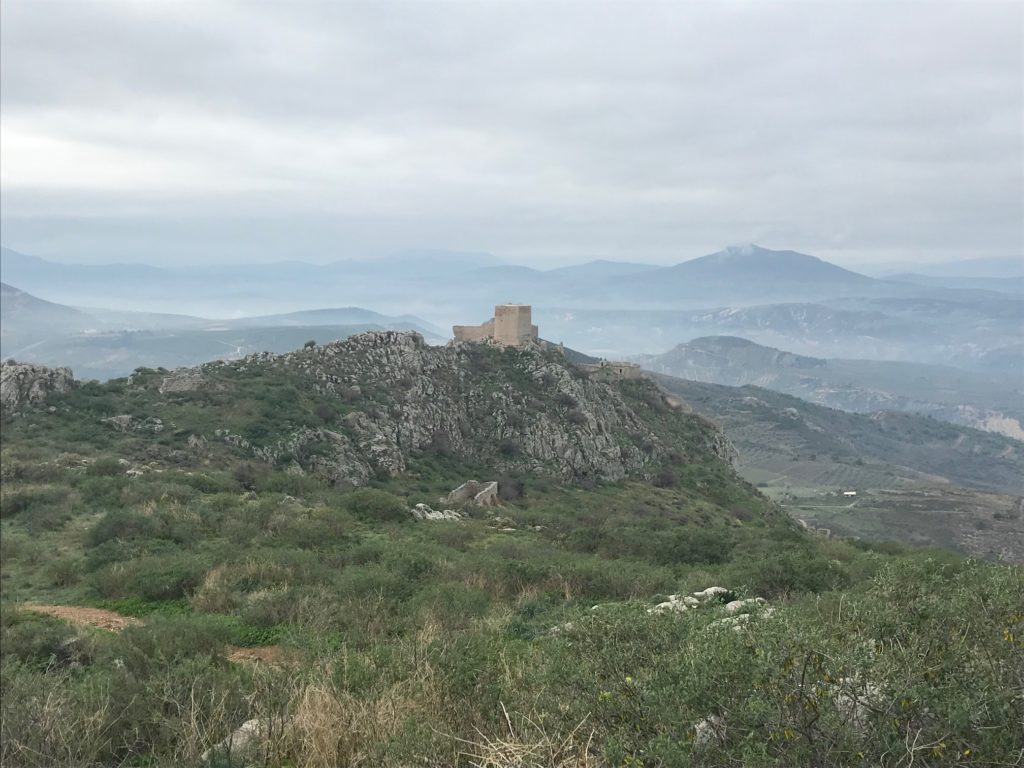 A Temple to the Greek Goddess of Love, Aphrodite, once stood at the highest point of the Acropolis but there is little left of that particular construction (nor indeed of the Byzantine Basilica that was built on top of it). Only other point of note concerning the Temple is that 1,000 prostitutes were said to work in the immediate vicinity. Not sure as to whether or not Aphrodite (or her Roman equivalent, Venus) would appreciate that but it could help explain the significant growth in the city’s population under the Greeks and Romans.

Okay, that’s it. I promise there will be no more castles or fortresses while I am in Greece.